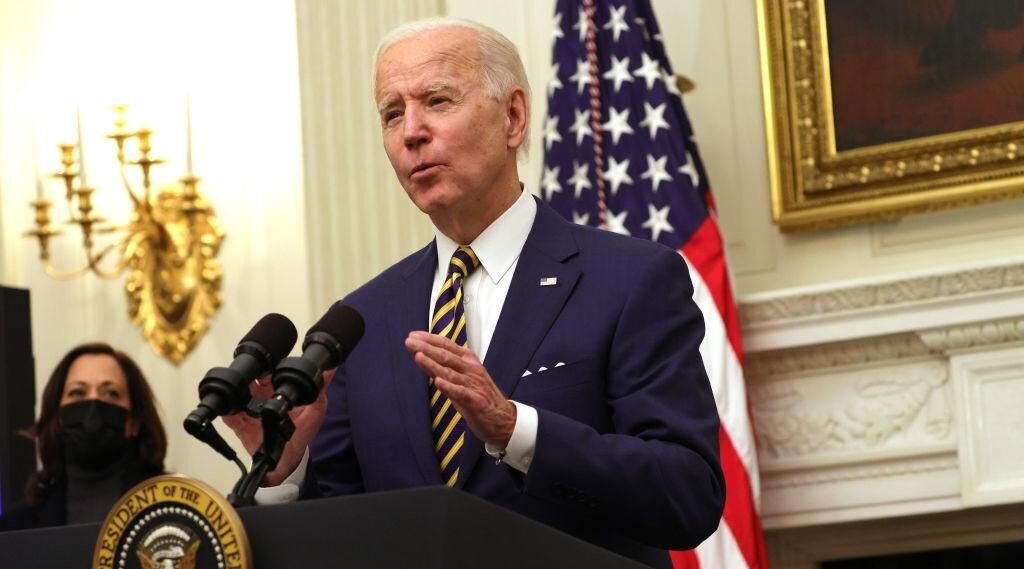 President Joe Biden speaks as Vice President Kamala Harris looks on during an event on the economic crisis, in the State Dining Room of the White House Jan. 22, 2021 in Washington, D.C. (Alex Wong/Getty Images)

NEW DELHI – Last week as the Intra-Afghan Peace talks were being held in Doha, Taliban leaders, led by Mullah Abdul Ghani Baradar, suddenly decided to board a flight to Tehran. The visit took place within days of the new U.S. administration taking its guard in Washington. The U.S. capital was already agog with whispers that the new Joe Biden administration was breaking away from key Trump administration hallmarks, the withdrawal of U.S. troops in Afghanistan, and re-stablishing ties with Iran.

Iran had earlier bonded with the Obama administration, when Joe Biden was Vice President, resulting in the Iran nuclear deal.

Biden is also signaling that the U.S. may deviate from Trump’s deal with the Afghans, leading to the complete withdrawal of U.S. forces from the Hindukush.

Ghani’s comments follow remarks by Jake Sullivan, Biden’s national security adviser, that Washington’s dealings with China, Afghanistan and Iran are key priorities for the new administration. On the issue of the Doha Agreement, Biden’s administration has asserted that it would have no truck with the Haqqani Network and al-Qaeda in its dealings with the Taliban. In a statement, Sullivan said that his team wanted to assess whether the Taliban was living up to its commitments to cut ties with terrorist groups, to reduce Afghan violence and to engage in “meaningful negotiations” with the government and other stakeholders” in the country and it intends to “review” the U.S.-Taliban deal.

This has rattled Taliban leaders who were hoping to grab power in Afghanistan with the tacit support of Pakistan. After meeting leaders in Tehran, Taliban leader Baradar said the Doha agreement and Intra-Afghan talks would lead to the overthrow of the Ashraf Ghani-led government and “Afghanistan’s new Islamic government will emerge.” But Iran’s Foreign Minister Mohammad Javad Zarif made it clear to the Taliban delegation that Iran supports an inclusive Afghan government that would include all ethnic groups and sects.

Zarif also underlined that Iran would never recognize any current group seeking to take power in Afghanistan through war, stressing the need for all ethnic groups to participate in a fully peaceful process to decide the fate of Afghanistan.

Interestingly, the Iranian government had informed Kabul of the Taliban visit beforehand, and that Tehran said it would emphasize upon the Taliban that a pause in violent attacks against civilians and government officials was essential, besides, lasting peace should be pursued within the framework of the Afghan constitution.

Iran’s move to host the Taliban could be an attempt to demonstrate to U.S. President Joe Biden’s administration that Tehran is willing to dock its position on the Afghan peace process with that of the U.S. under Biden.

Behind Iran’s diplomatic signaling lies a fundamental distrust between Tehran and Islamabad, which may be engaged in a covert war in Balochistan. The animus between the two has become evident in the utterings of a serving Pakistani Major General serving in Balochistan. “If the threat of Financial Action Task Force is averted, we will go inside Iran and take action. Iran is the biggest enemy of Pakistan which has a direct hand in the instability of Balochistan,” Major General Ayman Bilal was quoted as saying.

Ahead of a likely normalization, the Biden administration is also signaling its willingness to engage, rather than isolate Iran.

The likely turnaround of ties between Washington and Tehran is good news for India. A revalidation of the Iran nuclear deal or its clone will open its strategic track with Iran with energy and transit via Chabahar and the International North South Corridor as its key pillars.

India halted its imports from Iran, previously its third-largest oil supplier, in mid-2019 after the expiration of U.S. exemptions. Now with the new administration in Washington, Indian diplomacy is regaining momentum vis-e-vis Iran.

Last week when the Taliban delegation was in Tehran, an Indian delegation, led by joint secretary (Pakistan-Afghanistan-Iran) JP Singh of the external affairs ministry, visited Iran for political consultations and also took stock of the development of the Shahid Beheshti terminal at Chabahar Port in his meeting with Rasoul Mousavi, assistant to Iran’s foreign minister and director-general for West Asia in the foreign ministry.

India and Iran are more or less on same page on the peace process of Afghanistan, despite differences between New Delhi and Tehran on engaging with the Taliban.