HomeIndia140 are Missing After Glacier Breaks in India’s Himalayas

140 are Missing After Glacier Breaks in India’s Himalayas 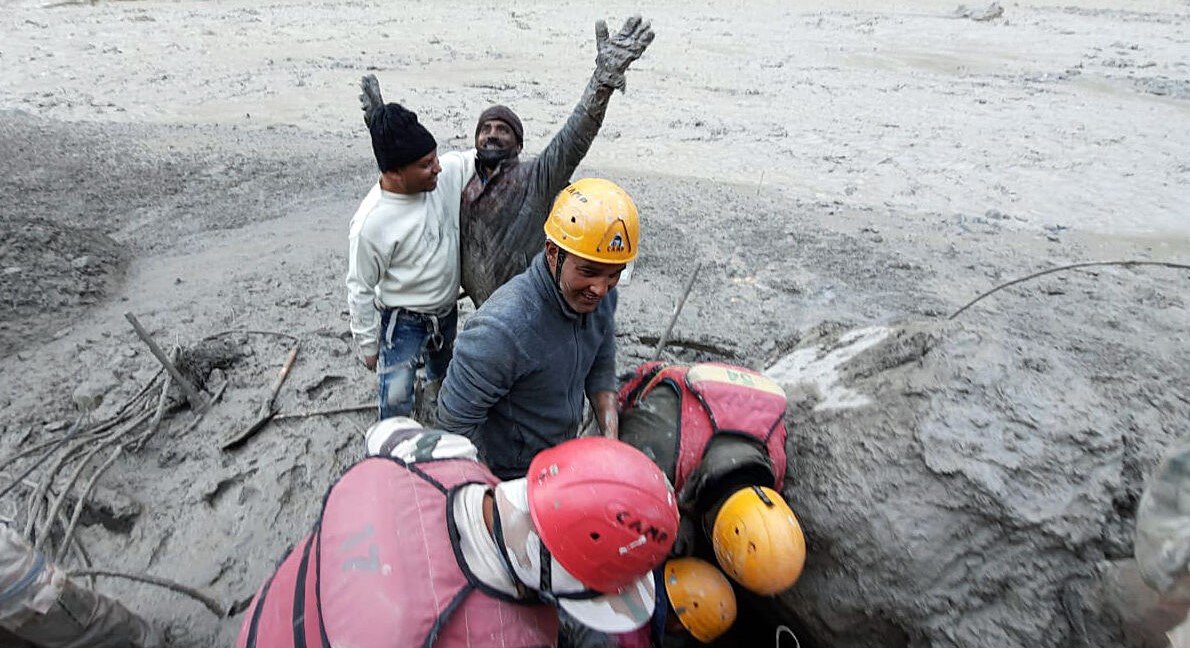 140 are Missing After Glacier Breaks in India’s Himalayas

A man reacts after he was pulled out from beneath the ground by Indo Tibetan Border Police personnel during rescue operations after a portion of Nanda Devi glacier broke off in Tapovan area of Uttarakhand Feb. 7. (ANI photo)

RISHIKESH, India — Indian rescue crews struggled to reach trapped victims Feb. 7 after part of a glacier in the Himalayas broke off and released a torrent of water and debris that slammed into two hydroelectric plants. At least nine people were killed and 140 were missing in a disaster experts said appeared to point to global warming.

Video from India’s northern state of Uttarakhand showed the muddy, concrete-gray floodwaters tumbling through a valley and surging into a dam, breaking it into pieces with little resistance before roaring on downstream. The flood turned the countryside into what looked like an ash-colored moonscape.

More than 2,000 members of the military, paramilitary groups and police took part in the search-and-rescue operation, including soldiers expert in mountaineering, working into the night under bright halogen lights, authorities said.

The flood was caused when a portion of Nanda Devi glacier snapped off in the morning, releasing water trapped behind it, authorities said. It rushed down the mountain and into other bodies of water, forcing the evacuation of many villages along the banks of the Alaknanda and Dhauliganga rivers.

A hydroelectric plant on the Alaknanda was destroyed, and a plant under construction on the Dhauliganga was damaged, said Vivek Pandey, a spokesman for the paramilitary Indo Tibetan Border Police. Flowing out of the Himalayan mountains, the two rivers meet before merging with the Ganges River.

Pandey said at least 42 workers were trapped in two tunnels at the Dhauliganga project. Twelve were rescued from one of the tunnels, while at least 30 others remained stranded inside the other, he said.

“The rescuers used ropes and shovels to reach the mouth of the tunnel. They dug through the debris and entered the tunnel. They are yet to come in touch with the stranded people,” said Chief Minister Trivendra Singh Rawat, Uttarakhand’s top elected official.

An additional 140 workers at the two plants were missing, Pandey said. Surjeet Singh, a police official, said at least nine bodies were recovered.

On Feb. 8, rescuers continued working to rescue more than three dozen power plant workers trapped in the tunnel after part of the Himalayan glacier broke off and sent a wall of water and debris rushing down the mountain. Officials said the focus was on saving 37 workers who are stuck inside a tunnel at one of the affected hydropower plants. Excavators had been brought in the help with the efforts.

“The tunnel is filled with debris, which has come from the river. We are using machines to clear the way,” said H. Gurung, a senior official of the paramilitary Indo Tibetan Border Police.

A hydroelectric plant on the Alaknanda was destroyed, and a plant under construction on the Dhauliganga was damaged, said Vivek Pandey, an Indo Tibetan Border Police spokesman. Flowing out of the Himalayan mountains, the two rivers meet before merging with the Ganges River.

The trapped workers were at the Dhauliganga plant, where on Feb. 7 12 workers were rescued from a separate tunnel.

A senior government official told The Associated Press that they don’t know the total number of people who were working in the Dhauliganga project. “The number of missing people can go up or come down,” S A Murugesan said.

Those rescued Feb. 7 were taken to a hospital, where they were recovering.

One of the rescued workers, Rakesh Bhatt, told The Associated Press said they were working in the tunnel when water rushed in.

“We thought it might be rain and that the water will recede. But when we saw mud and debris enter with great speed, we realized something big had happened,” he said.

Bhatt said one of the workers was able to contact officials via his mobile phone.

“We waited for almost six hours — praying to God and joking with each other to keep our spirits high. I was the first to be rescued and it was a great relief,” he said.

The Himalayan area has a chain of hydropower projects on several rivers and their tributaries. Rawat said authorities were able to save other power units downstream because of timely action taken to release water by opening gates.

The floodwaters also damaged houses, said Ravi Bejaria, a government spokesman, though he had no details on the number and whether any of the residents were injured, missing or dead.

“It all started sometime around 10 in the morning. We heard a bang, which shook our village,” Dinesh Negi, a resident of Raini village, told The Associated Press by phone. He said they watched from high above one of the rivers as the water turned muddy and surged in a torrent.

“We knew something wrong had happened,” Negi said. “We could see the fury of the river.”

Video showed rescuers in camouflage uniforms and bright yellow or red helmets, using ropes to reach victims. A man who was pulled from a muddy hole threw his arms in the air, and rescuers laughed and exulted with him. Rescue workers comforted victims lying in a row of stretchers in the open.

Scientists have long known that global warming is contributing to the melting and the breakup of the world’s glaciers.

Anjal Prakash, research director and adjunct professor at the Indian School of Business who has contributed to U.N.-sponsored research on global warming, said that while data on the cause of the disaster was not yet available, “this looks very much like a climate change event as the glaciers are melting due to global warming.”

Uttarakhand Police Chief Ashok Kumar said officials immediately alerted residents in the area and evacuated them to safer places. Downstream, popular tourist spots on the banks of the Ganges were shut, and all boating activities were stopped.

In 2013, thousands of people were killed in Uttarakhand after heavy rains triggered landslides and floods, washing away thousands of houses and roads and cutting communications in many places.