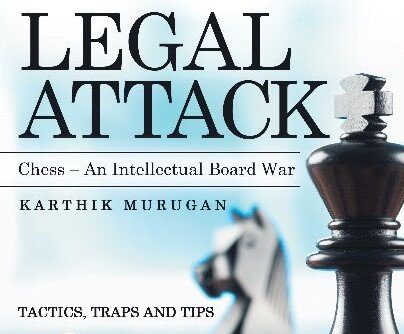 A news release notes that the success of Netflix’s original miniseries, “The Queen’s Gambit,” has revitalized global interest in chess, with significant spikes in chess set sales and “how to play chess” search queries.

Murugan, however, realized that as people set up their new boards and seek out the best strategies for winning, they may encounter difficulties in finding comprehensive, digestible gameplay guides that cater to the unique needs of novice players.

To assist those at the beginning of their chess journeys, Murugan has released “Legal Attack: Chess – An Intellectual Board War.”

The book contains 30 powerful chess tactics, each with 10 puzzles for readers to practice and solve, it said.

Organized from simple to complex, the puzzles allow readers to gradually move through the most important aspects of the game, review common tactics, mates and traps, and advance their technique, the release notes.

Murugan, who began playing chess in 2014, was inspired to write “Legal Attack” after struggling to find a chess guide that was both tailored toward beginners and expansive in scope.

Combining lessons, notes and strategies gleaned from tournaments and coaching, the book streamlines the information most valuable to beginners and moderate players and focuses on teaching the puzzles and pattern recognition necessary to be successful and win games, the release said.

“I have read hundreds of chess books,” Murugan said in a statement. “Not many books are out there that are crisp enough to inspire a beginner or a moderate player and advise them of the powerful techniques needed to win the games. Chess is all about attacking and defending. It’s a war, and you need to win.”

The reviews have been positive.

Murugan is a ninth-grade student at Downingtown East High School in Downingtown, Pennsylvania. He has been playing chess since 2014 and now teaches kids and promotes chess in the local area.

His peak United States Chess Federation rating is approximately 1700, and he has played 800 games in 170 USCF-rated tournaments. He surpassed 1000 in his first 20 tournaments.

“Legal Attack: Chess – An Intellectual Board War” is available at Amazon, Barnes & Noble and Archway Publishing.