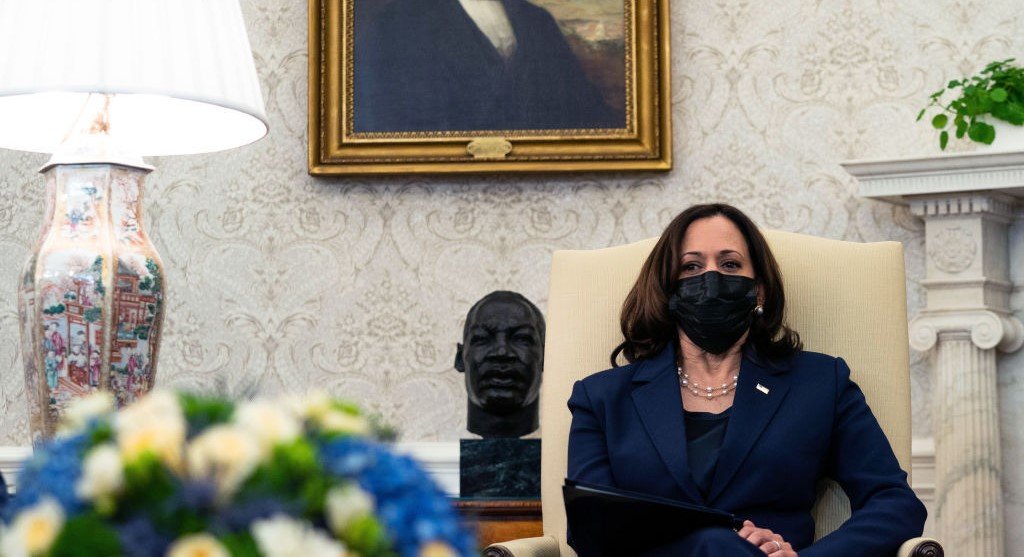 Vice President Kamala Harris looks on during a meeting with U.S. President Joe Biden and Treasury Secretary Janet Yellen in the Oval Office of the White House on Jan. 29, 2021 in Washington, DC. The Indian American has dissolved her political fundraising committees. (Anna Moneymaker-Pool/Getty Images)

Vice President Kamala Harris last month, in the lead up to her Jan. 20 inauguration, dissolved her political fundraising committees, with intentions to give the leftover funds to charities throughout California.

The dollar totals left in the accounts are far less than the tens of millions Harris raised as a candidate, most of which was spent on her unsuccessful run for president, according to a San Francisco Chronicle report.

But her decision to close the accounts, shared exclusively with The Chronicle, also leaves Harris with no active fundraising PACs of her own — a signal to those who question whether her focus will be on a 2024 presidential campaign of her own rather than a President Joe Biden re-election, the report said.

Harris will donate the roughly $60,000 left in the accounts of her Senate campaign committee and a separate political action committee to three charities. The Indian American intends to close her presidential campaign committee as well, but cannot do so until a complaint filed against it with the Federal Election Commission is resolved, the report said.

The California Democrat is distributing $20,000 to each of the three charities she selected, according to her transition staff. She picked organizations that have been especially valuable amid the pandemic, her staff said in the report.

In the Bay Area, Harris, an East Bay native, will donate to Bananas, a resource to help families access child care. The organization serves families and providers in Oakland, Berkeley, Albany, Piedmont, Emeryville and Alameda.