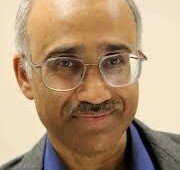 P.P. Vaidyanathan, an Indian American professor at the California Institute of Technology based in Pasadena, California, has been recognized by a European engineering body for his work in the field of signal processing. (caltech.edu photo)

PASADENA, Calif. – Palghat P. Vaidyanathan, a professor in electrical engineering at the prestigious California Institute of Technology since 1983, has been awarded the EURASIP Athanasios Papoulis Award for 2020.

The Athanasios Papoulis Award is given to honor scientists whose work has had a major impact in various aspects on signal processing education. The award is offered only on demand, every time there is an exceptional candidate, and not on a regular period of time, it was reported.

Vaidyanathan, the European Association for Signal Processing said, was being recognized for outstanding contributions to research and teaching of signal processing and multirate filter bank theory. EURASIP is the flagship signal processing society in Europe, somewhat like a European counterpart of IEEE. The award will be presented at their conference scheduled to be held in Dublin, Ireland, in August.

Vaidyanathan has authored over 500 peer reviewed papers and four books in the signal processing area. The Indian American engineer has been a recipient of several awards in his field of work over the years even while focusing on students and receiving the award for excellence in teaching at Caltech multiple times.

Considered to be one of the pioneering contributors to multirate signal processing research, Vaidyanathan has heavily influenced the research directions in filter banks and multirate systems. He is most well known for developing the general theory of filter banks with perfect reconstruction, as well as orthonormal filter banks, which have impacted digital communications, audio, and image coders.

An early proponent of applying signal processing methods to genomics, Vaidyanathan developed methods to computationally predict the location of protein coding genes and noncoding genes. His recent work on Ramanujan-sums, and his introduction of Ramanujan subspaces, have resulted in new representations and efficient algorithms for signals with hidden patterns such as periodicities.