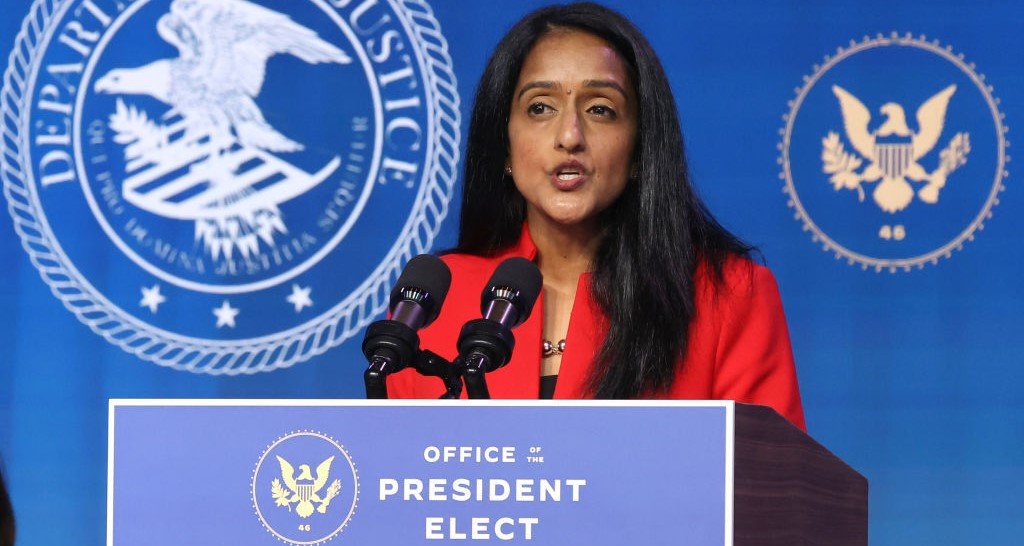 Vanita Gupta delivers remarks after being nominated to be U.S. associate attorney-general by then President-elect Joe Biden at The Queen theater Jan. 07, 2021 in Wilmington, Delaware. (Chip Somodevilla/Getty Images)

NEW YORK – With the nomination of Indian American cabinet nominee Neera Tanden deadlocked, the focus is now on Vanita Gupta, who is soon to face the Senate for confirmation as the third highest-ranking official in the Justice Department.

Conservatives are split on Gupta, an Indian American civil rights lawyer, with two groups fighting it out with TV ads – one rallying against attacks on her by another.

President Joe Biden has nominated Gupta to be the associate attorney-general and the Senate is to take up her confirmation on March 9.

The first salvo came from the Judicial Crisis Network with an ad campaign accusing her of being soft on crime.

In a reference to the Black Lives Matter protests against police brutality that sometimes turned violent last year, the group’s ad said, “When our cities burned Gupta could’ve stood for law and order, for victims. Instead, she advocated to let convicts out of jail.”

However, it also coincided with the Covid-19 pandemic and her suggestion to release some of the low-level criminals only echoed that of former President Donald Trump’s Attorney General William Barr, who wanted to ease crowding in jails that could spread the disease.

According to media reports, the Network spent $800,000 on the campaign.

Now, the Defending Democracy Together organization is countering it with a campaign ad of its own that is on YouTube and is set to air on TV.

It said that she “has been building bridges across partisan divides, she has the broad backing of law enforcement” and has the support of leading conservatives.

Gupta will need the support of all the 50 Democrats in the evenly-divided Senate to get her nomination approved – or will have to get Republican support if anyone from her party defects.

Tanden’s nomination to be the director of the Office of Management and Budget is stalled because one Democrat, Joseph Manchin, announced that he will not vote for her, citing her intemperate statements and tweets attacking both Republicans and Democrats.

The White House is trying to get at least one Republican to defect, but has not succeeded so far.

While a leftist group, Roots Action, has campaigned against Tanden, who had attacked the leftist Senator Bernie Sanders among others, the Democrats and other liberals are solidly behind Gupta.

The Wall Street Journal reported that a petition against Gupta was being circulated by some Republican state attorneys-general.

Countering that campaign and the one by the Network campaign labelling Gupta soft on crime, three groups of law enforcement officials – Fraternal Order of Police, Major County Sheriffs of America and Federal Law Enforcement Officials Association – have come out to support her.

During his Senate hearings, Merrick Garland, who was confirmed as the attorney-general, faced hostile questions about Gupta from Republican Senator Mike Lee.

Garland vouched for her saying, “I regard her as a person of great integrity and a person dedicated to the mission of the department, particularly equal justice under the law.”

Gupta was the principal deputy assistant attorney-general and head of the Civil Rights Division in former President Barack Obama’s administration.

She made her mark as a newly-minted lawyer by winning the release of 38 people, most of them African-Americans, who had been wrongly convicted by all-White juries on drug charges in a Texas town and also got them $6 million of compensation.