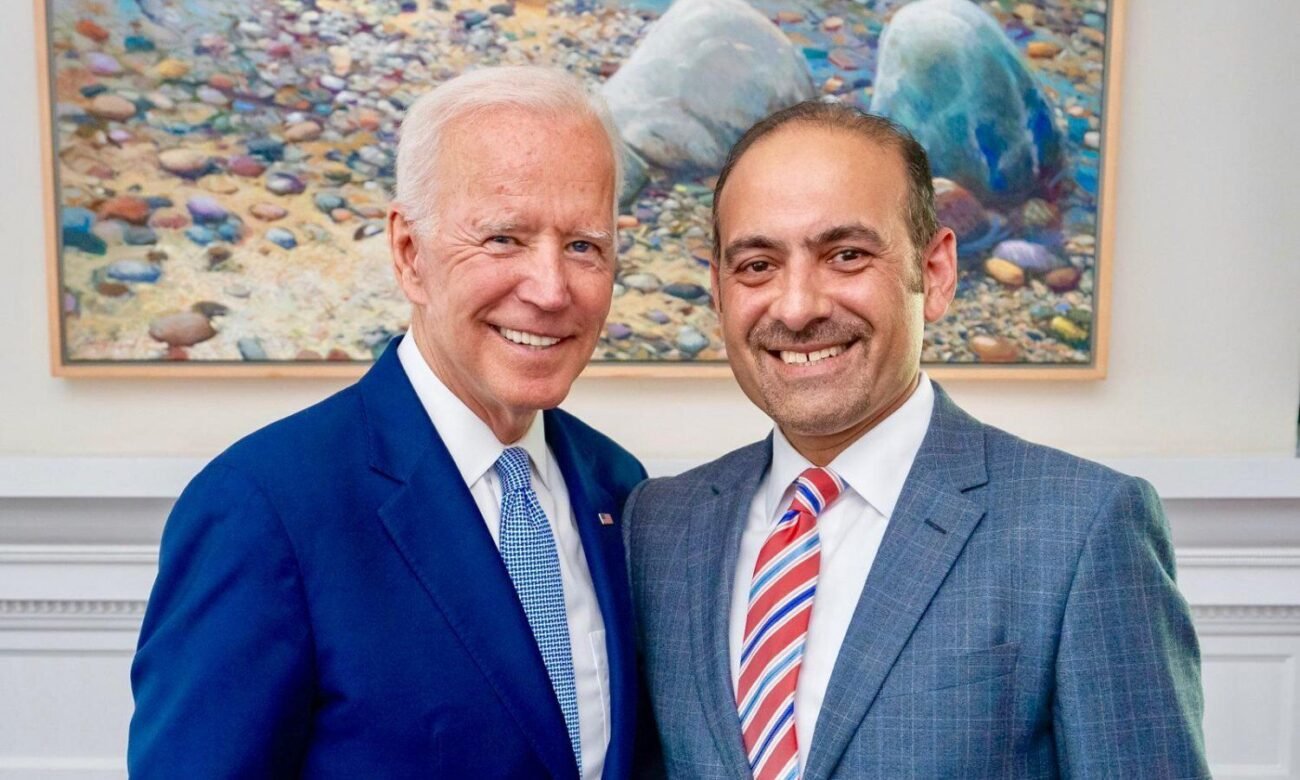 Dilawar Syed, co-chair of the AAPI Victory Fund, has been nominated by President Joe Biden to serve as Deputy Administrator at the Small Business Administration. Shekar Narasimhan, an Indian American executive who launched the AAPI Victory Fund with Syed, told India-West Syed brings in “a rare set of skills. He is a tech entrepreneur who knows how to build a successful business, and, importantly, has an appreciation for the difficulties of running and growing minority-owned businesses.” Syed is seen here in a file photo with President Joe Biden. (India-West file photo)

If he is confirmed by the Senate, Syed would be the highest-ranking Muslim American in the Biden administration, and the first Pakistani American to serve in a Cabinet role. The president had stated on the campaign trail that he hoped to see Syed serve in his administration.

Syed told India-West he could not comment on the nomination. But in a public post on his Facebook page, he wrote: “I am deeply humbled, honored, and moved by the president’s nomination of me to help lead the Small Business Administration as the Deputy Administrator.”

“If confirmed by the U.S. Senate, I will pour my heart and soul into helping entrepreneurs and builders everywhere at this challenging time.

I know firsthand the grit, hard work, and heart it takes to build a small business— often against tough odds,” wrote Syed, founder of Lumiata, a healthcare company that harnesses artificial intelligence to reduce costs and improve patient outcomes.

“Our journeys are more than about ourselves — I hope I have the privilege to serve our president, and entrepreneurs across America,” wrote Syed.

Shekar Narasimhan, who founded the AAPI Victory Fund with Syed in 2016 to mobilize 23 million AAPI voters, told India-West: “This is very exciting and well-deserved.”

“Dilawar brings a rare set of skills,” added Narasimhan. “He is a tech entrepreneur who knows how to build a successful business, and, importantly, has an appreciation for the difficulties of running and growing minority-owned businesses,” said the Indian American.

Muslims for Biden also lauded the nomination. “Congrats to Dilawar Syed for his nomination as Small Business Administration Deputy Administrator. We are wishing him all the best in this process,” said the organization in a tweet.

The SBA came under fire last year for a seeming lack of oversight over the allocation of funds to small businesses via the Paycheck Protection Program, implemented by Congress to help small businesses recover from the economic hit of the COVID pandemic and stay-at-home orders in many states. The SBA defined small businesses as those with under 500 employees.

Larger entities, many with backing from venture capital funds, gobbled up $350 billion in funds, 14 days after the program began. Mom and pop businesses on Main Street America were largely left out of the first round of funding.

Before founding Lumiata, Syed was president at Freshworks where he helped scale the software company’s products to thousands of small and medium businesses. He has also served as the founding Chair of the California Entrepreneurship Task Force with the Governor’s Office of Business and Economic Development.

Syed also served in President Barack Obama’s administration as a member of the White House Commission on Asian Americans and Pacific Islanders and chaired the White House Initiative on AAPIs’ Economic Growth Committee. He led the administration’s engagement with small businesses across the U.S. after the passage of the American Recovery and Reinvestment Act of 2009.

Syed holds an M.B.A. from The Wharton School of the University of Pennsylvania and earned a B.A. in economics and computer science from The University of Texas at Austin. Syed immigrated to the U.S. from Pakistan as a freshman to attend The College of Wooster in Ohio. He and his family live in Redwood City, California.