HomeIndiaIndia and the worldCollege Tuition Sparked a Mental Health Crisis. Then the Hefty Hospital Bill Arrived 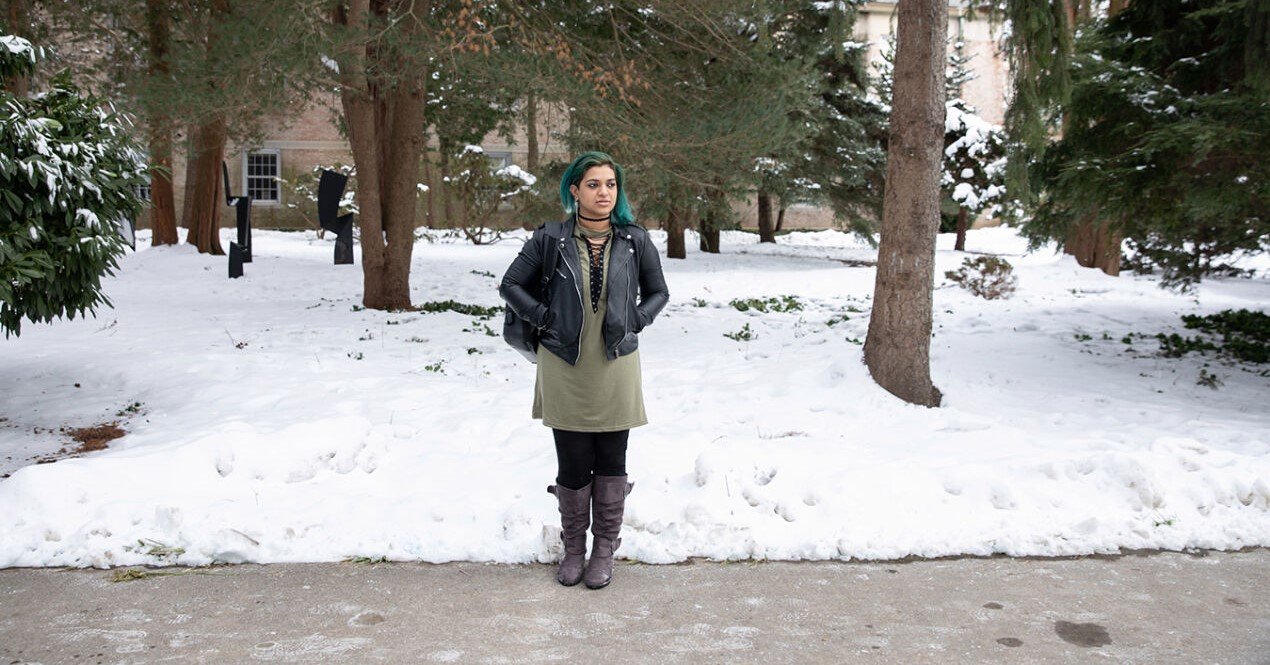 Divya Singh, an Indian student at Hofstra University in Hempstead, New York, sought counseling help after feeling panicked when she had trouble paying a big tuition bill. A weeklong stay in a psychiatric hospital followed — along with a $3,413 bill. (Jackie Molloy/for KHN)

Despite a lifelong struggle with panic attacks, Divya Singh made a brave move across the world last fall from her home in Mumbai, India. She enrolled at Hofstra University in Hempstead, New York, to study physics and explore an interest in standup comedy in Manhattan.

Arriving in the midst of the Covid-19 pandemic and isolated in her dorm room, Singh’s anxiety ballooned when her family had trouble coming up with the money for a $16,000 tuition installment. Hofstra warned her she would have to vacate the dorm after the term ended if she was not paid up. At one point, she ran into obstacles transferring money onto her campus meal card.

“I’m a literally broke college student that didn’t have money for food,” she recalled. “At that moment of panic, I didn’t want to do anything or leave my bed.”

In late October, she called the campus counseling center hotline and met with a psychologist. “All I wanted was someone to listen to me and validate the fact that I wasn’t going crazy,” she said.

Instead, when she mentioned suicidal thoughts, the psychologist insisted on a psychiatric evaluation. Singh was taken by ambulance to Long Island Jewish Medical Center in New Hyde Park, New York, and kept for a week on a psychiatric ward at nearby Zucker Hillside Hospital. Both are part of the Northwell Health system.

The experience — lots of time alone and a few therapy sessions — was of minimal benefit psychologically, she said. Singh emerged facing the same tuition debt as before.

And then another bill came.

What Gives: Singh had purchased her Aetna insurance plan through Hofstra, paying $1,107 for the fall term. Aetna markets the plan specifically for students. Under its terms, students can be on the hook for up to $7,350 of the costs of medical care during a year, according to plan documents. Singh’s Northwell bill of around $3,413 is the plan’s requirement that she pay for 20% of the costs of her hospital stay.

Although such coinsurance requirements are common in American health plans, they can be financially overwhelming for students with no income and families whose finances are already under the extreme stress of high tuition. Singh’s Hofstra bill for the academic year, including room and board and ancillary fees, totaled $68,275.

As a result, Singh found herself beset by a double whammy of bills from two of the costliest kinds of institutions in America — colleges and hospitals — both with prices that inexorably rise faster than inflation.

For hospitals, there is supposed to be a relief valve. The Internal Revenue Service requires all nonprofit hospitals to have a financial assistance policy that lowers or eliminates bills for people without the financial resources to pay them. Such financial assistance — commonly known as charity care — is a condition for hospitals to maintain their tax-exempt status, shielding them from having to pay property taxes on often expansive campuses.

Northwell’s financial assistance policy limits the hospital from charging more than $150 for individuals who earn $12,880 a year or less. It offers discounts on a sliding scale for individuals earning up to $64,400 a year, although people with savings or other “available assets” above $10,000 might get less or not qualify.

The IRS requires hospitals to “widely publicize” the availability of financial assistance, inform all patients about how they can obtain it and include “a conspicuous written notice” on billing statements.

While the bill Northwell sent Singh includes a reference to “financial difficulties” and a phone number to call, it did not explicitly state that the hospital might reduce or waive the bill. Instead, the letter obliquely said “we can assist you in making budget payment arrangements” — a phrase that conjures installment payments rather than debt relief.

Resolution: In a written statement, Northwell said that although “all eligible patients are offered generous financial payment options … it is not required that providers list the options on the bill.” Northwell stated: “If a patient calls the number provided and expresses financial hardship, the patient is assisted with a financial need application.” However, Northwell lamented, “unfortunately, many patients do not call.”

Indeed, a KHN investigation in 2019 found that, nationwide, 45% of nonprofit hospital organizations were routinely sending medical bills to patients whose incomes were low enough to qualify for charity care. Those bills, which totaled $2.7 billion, were most likely an undercount since they included only the debt hospitals had given up trying to collect.

Singh said the worker who took down her insurance information during her hospital stay never explained that Northwell might reduce her portion of the charge. She said she didn’t realize that was a possibility from the language in the bill they sent.

Northwell said in a statement that after KHN contacted it about Singh’s case, Northwell dispatched a caseworker to contact her. Singh said the caseworker helped Singh enroll in Medicaid, the state-federal health insurance program for low-income people. Foreign students are not generally eligible for Medicaid, but in New York they can get coverage for emergency services. With the addition of Medicaid’s coverage, Singh should end up paying nothing if the stay is retroactively approved, Northwell said.

At the same time the caseworker was helping Singh, Singh received a “final reminder” letter from Northwell about her bill. That letter also mentioned Northwell’s financial assistance, but only within the context of people who completely lack health insurance.

“Send payment or contact us within 21 days to avoid further collection activity,” the letter said.

The Takeaway: Despite stricter requirements from the Affordable Care Act and the IRS to make nonprofit hospitals proactively educate patients about the various forms of financial relief they offer, the onus still remains on patients. If you have trouble paying a bill, call the hospital and ask for a copy of its financial assistance policy and the application to request your bill be discounted or excused.

Be aware that hospitals generally require proof of your financial circumstances such as pay stubs or unemployment checks. Even if you have health insurance that covers much of your medical bill, you may still be eligible to have your bill lowered or get on a government insurance program like Medicaid.

You can also find documentation online: All nonprofit hospitals are required to post financial assistance policies on their websites. They must provide summaries written in plain language and versions translated into foreign languages spoken by significant portions of their communities. Be aware that financial assistance is distinct from paying your full debt off in installments, which is what hospitals sometimes first propose.

Although the IRS rules don’t govern for-profit hospitals, many of those also offer concessions for people with proven financial hardship. The criteria and generosity of charity care vary among hospitals, but many give breaks to families with middle-class incomes: Northwell’s policy, for instance, extends to families of four earning $132,500 a year.

Singh’s family has paid off her fall tuition and half of her spring tuition so far. She still owes $16,565.

Singh said the back and forth over her hospital bill continues to cause anxiety. “The treatment I got in the hospital, after I’ve gotten out, it hasn’t helped,” she said. “I have nightmares about that place.” The biggest benefit of her week there, she said, was bonding with the other patients “because they were also miserable with the way they were being treated.”

(This article was originally published in “Bill of the Month,” a crowdsourced investigation by Kaiser Health News and NPR that dissects and explains medical bills. It is being republished with permission from KHN.)