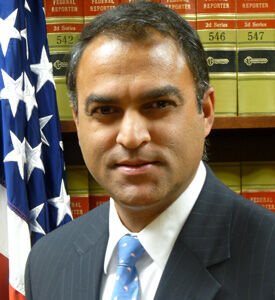 The Department of Justice and the U.S. Attorney’s Office in the Southern District of Ohio March 1 announced that Indian American Vipal Patel has been named its Acting Federal Prosecutor.

Patel takes over for former U.S. Attorney David DeVillers, who stepped down last month after the DoJ requested that U.S. attorney appointees of former President Donald Trump step down.

“These are huge shoes to fill, and I am humbled and honored to fill them,” Patel said in a statement. “The important work of the public servants in this office – and their dedication to justice – continues. Our casework will persist uninterrupted.”

Patel, 53, a longtime resident of Dayton, became an assistant U.S. attorney in 2000. He has served in U.S. Attorney Office criminal, civil and appellate divisions.

He spent 2011 in Afghanistan, serving a one-year anti-corruption and counter-narcotics assignment as a U.S. Department of Justice civilian adviser, the news release said.

Patel was the lead prosecutor in the first ever international terrorism trial in the Southern District of Ohio in 2018, both prosecuting the case and successfully arguing its appeal.

He also represented the United States in the prosecution of weapons-related charges against a friend of the August 2019 Dayton mass shooter, it said.

In other significant casework, Patel prosecuted a local child exploiter who abused an infant, young child, and numerous teenage girls. The defendant was sentenced to life plus 10 years in prison, according to the release.

Patel received his law degree in 1991 from the George Washington University Law School. He currently serves as an evaluator of other United States Attorney’s Offices, teaches at the U.S. Department of Justice’s National Advocacy Center, in Columbia, South Carolina, and has taught abroad as part of DOJ’s Overseas Prosecutorial Development, Assistance, and Training program, it said.

Locally, since 2008, Patel has served as an adjunct professor at the University of Dayton Law School, the Southern District of Ohio release added.

In his spare time, he enjoys coaching youth soccer. He is currently the head coach of the Kroc Center Soccer Club’s boys U11 team, part of a new club soccer program Patel helped found with a friend and in partnership with the Dayton Salvation Army in an effort to bring competitive club soccer to, and serve the needs of, inner-city Dayton.

Patel immigrated to the United States 1970; he and his wife have two children and reside in downtown Dayton.

The U.S. Attorney’s Office for the Southern District of Ohio includes 67 Assistant United States Attorneys and 51 non-attorney personnel. They serve the southern 48 counties in the state, including the Columbus, Cincinnati and Dayton metropolitan areas.