HomeIndiaIndia and the worldNew Book Aims to Clarify, Draw Focus to Wisdom of the Vedas

New Book Aims to Clarify, Draw Focus to Wisdom of the Vedas 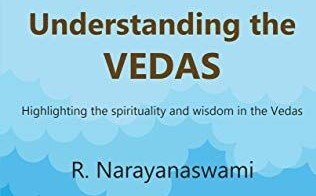 New Book Aims to Clarify, Draw Focus to Wisdom of the Vedas

WESTLAKE VILLAGE, Calif. – Southern California-based Dr. R. Narayanaswami has authored a book, “Understanding the Vedas,” adding to the pantheon of works seeking to get the modern world to understand the depth and wealth of knowledge in the ancient works.

A former NASA research scientist, founder of software companies and retired engineer with a doctorate from Texas Tech University, the Indian American brings that training to bear, explaining things precisely in points and subheads, references and parentheses, almost like a textbook.

The over 300-page self-published tome is divided in two sections. The first aims to set things in context and takes an expansive tone: dating of the Vedas, mentions of the Indus Valley civilization and an overview of the lives of the sages of the time. There is talk of harmony and devoted students who were willing to walk the path. Explanations are provided for terms used in the ancient scriptures, so those with doubts on what the “samhitas” or “bhashyas” are, can peruse material here.

The Vedic period declined, says the book, because of a decline in “initiate disciples,” or a lack of interest in those dedicating themselves to meditation and revelation. After years of neglect and dilution, the post-Vedic period saw the first of the movements to understand the Vedas and powerful texts like the Upanishads and Brahmanas evolved. Instead of reading or following only a singular set of texts, it is suggested that it might be more beneficial to study the Veda Samhitas which are known to be mathematically precise, and some of it belongs to the oldest traditions, followed by the early adherents of Sanatana Dharma.

Section two zeroes in on the knowledge contained in the Veda Samhitas. It makes the case of “divinization of life” so human beings can then realize their full potential. The texts, if tapped into, will reveal actions for success in the world as well as the equipoise needed for reaching the “triple infinity” of Truth, Knowledge and Bliss. In short, both the material and spiritual worlds can be effectively climbed.

“Understanding the Vedas” is available on Amazon.