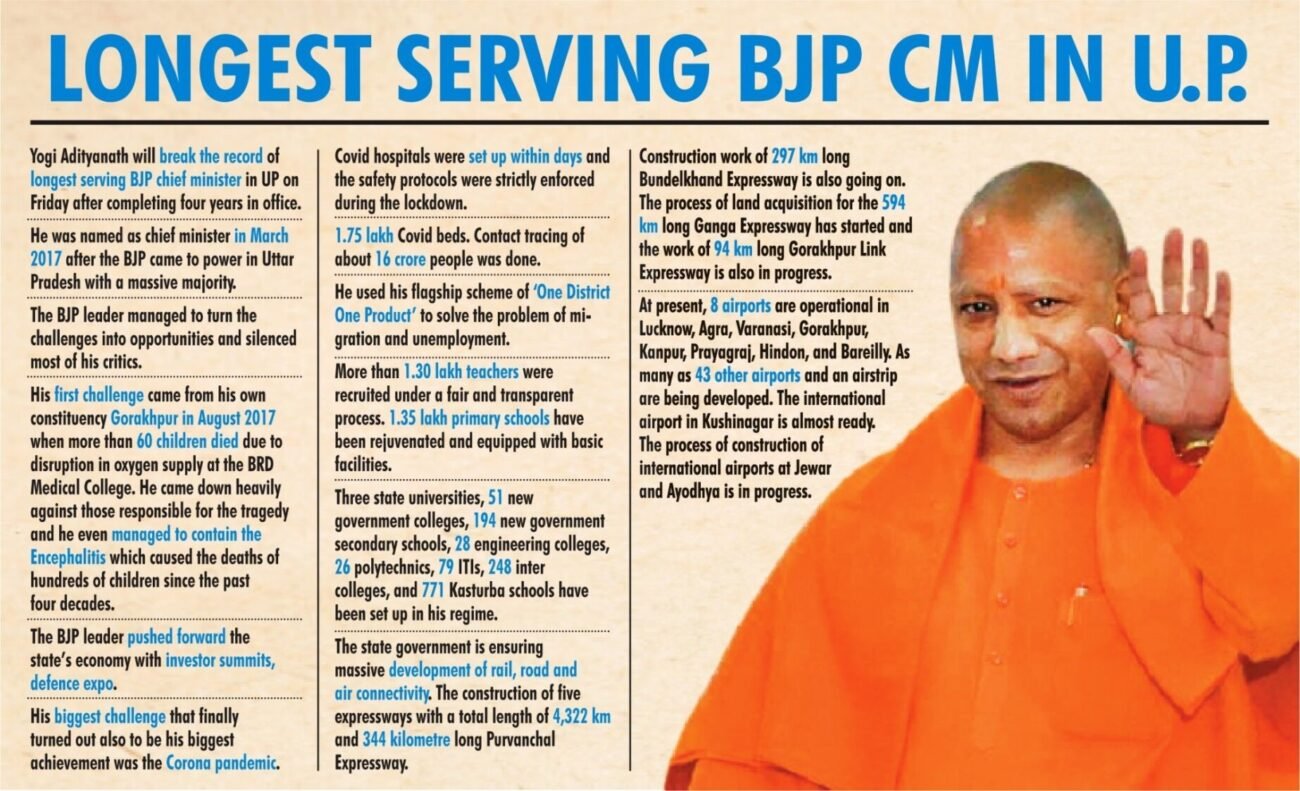 Yogi Adityanath was named as the chief minister in March 2017 after the BJP came to power in Uttar Pradesh with a massive majority. (IANS infographics)

His journey as chief minister has been no less than a roller-coaster ride with appreciable highs and depressing lows.

Yogi Adityanath was named as the chief minister in March 2017 after the BJP came to power in Uttar Pradesh with a massive majority but not many political pundits were ready to bet on him.

Yogi Adityanath managed to turn the challenges into opportunities and silenced most of his critics – not only in the opposition but also within his own party – with his performance.

Yogi Adityanath’s first challenge came from his own constituency Gorakhpur in August 2017 when more than 60 children died due to disruption in oxygen supply at the BRD Medical College.

Yogi came down heavily against those responsible for the tragedy and within a year, he even managed to contain the Encephalitis deaths in the region to a large extent. Hundreds of children had been dying of Encephalitis since the past four decades and the governments had watched on helplessly.

Yogi Adityanath turned around the situation with a public awareness campaign that was supported by a massive sanitation and hygiene drive.

A 64-page booklet titled, “Chunautiyon main talaashe avsar” (Challenges turned into opportunities) that has been brought out to mark his four years in office claims “four years of service and good governance” and lists his achievements.

From pushing forward the state’s economy with investor summits, defense expo and ground breaking ceremony to aggressively attempting to check rampant corruption in the state machinery and cracking down on organized crime-the booklet says it all.

Yogi Adityanath’s biggest challenge that finally turned out also to be his biggest achievement was the coronavirus pandemic.

In a state that was thoroughly deprived of medical infrastructure, the chief minister relentlessly worked to build up a medical management system that could deal with the pandemic.

Covid hospitals were set up within days and the safety protocols were strictly enforced during the lockdown.

The government, however, faltered when workers’ migration began and that is mainly because the entire focus was on the medical aspect of the pandemic and the state was apparently not prepared for the large-scale migration that took place.

The chief minister used the central and state schemes to provide temporary succor to a large section of population that had migrated to their home state. The relief was in the form of financial assistance and free food.

The migration created another problem – that of unemployment and Yogi Adityanath effectively used his flagship scheme of ‘One District One Product’ to solve the problem.

The ODOP, with assistance from the MSME sector, has emerged as the biggest driving force in the state, stretching its wings from traditional arts and crafts to modern-day start-ups.

The Yogi government has primarily focused on education, health and infrastructure development.

Several steps were taken to increase the quality of education. More than 1.30 lakh teachers were recruited under a fair and transparent process.

So far, 1.35 lakh primary schools have been rejuvenated and equipped with basic facilities. The enrolment of the children was done by motivating the parents and reducing the dropout rate.

Recognition of 28 new private universities is under process. A state university is to be opened in every unserved division and a new Sainik School in Gorakhpur will be set up.

Atal Residential Schools have been established in 18 divisions for the free education of the children of laborers.

In another first, the Abhyuday scheme has been launched for free coaching for students appearing in competitive examinations.

In the first phase of the scheme, more than 52,000 candidates have been registered.

The health infrastructure in Uttar Pradesh was developed during Yogi’s tenure with an unprecedented speed.

Uttar Pradesh was at the forefront of the country by providing 1.75 lakh covid beds. Contact tracing of about 16 crore people was done in two lakh localities. ICU, ventilator, TRUnat machines were arranged in all district hospitals.

By carrying out 1.75 lakh covid tests every day, the state topped the country. The country’s largest plasma bank was established in Lucknow. More than 64,000 covid help desks were also set up in the entire state.

In infrastructure development, the state government is ensuring massive development of rail, road and air connectivity.

The construction of five expressways with a total length of 4,322 kms is being ensured. Traffic will start soon on the 344-kilometre long Purvanchal Expressway.

The roads on the international/interstate borders of the state and all the district headquarters have been connected by four-lane roads. Such tehsils and development block headquarters, which were not connected by two-lane road till now, are now being rapidly connected.

At present, 8 airports are operational in Lucknow, Agra, Varanasi, Gorakhpur, Kanpur, Prayagraj, Hindon, and Bareilly. As many as 43 other airports and an airstrip are being developed.