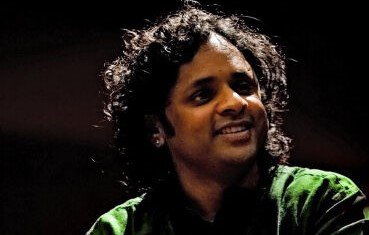 Giridhar Udupa is an acclaimed Indian ghatam (percussion) artist with three decades of experience of collaborations with eminent artists across the world. (ghatamudupa.com photo)

The collaboration was inspired by the band’s commitment to support Aero India 2021, and reinforces the U.S.-India Major Defense Partnership and people-to-people ties between the two countries.

The band’s original plan included a live performance with Indian master-percussionist Ghatam Giridhar Udupa. But these plans were scuttled due to the outbreak of the covid pandemic.

While each soloist performs in their traditional musical language, the energy and passion of their music is and always will be universal. “We can’t wait to have an in-person cultural exchange with our new friend Udupa and the people of India,” the band said in its statement on Facebook.

The original song, “Open Clusters,” was composed by Staff Sergeant Luis Rosa, a saxophone instrumentalist with the U.S. Air Force Band of the Pacific, and is a musical fusion of two masters of Indian and Puerto Rican culture and rhythm, the statement explained,

Other artists in the musical composition are Senior Airman Guy James on guitar, Staff Sergeant Andrew Detra on bass, and Technical Sergeant Wilfredo Cruz on percussion.

The United States Air Force Band of the Pacific’s publicity section chief Technical Sergeant Wilfredo Cruz said, “We are honored and extremely grateful to be able to produce this musical collaboration for all of our viewers worldwide.”

He added that the pandemic did not allow the band to be in India to perform live during Aero India, yet music connects all regardless of distance or borders.

“We leverage the power of music to strengthen bonds with our friends and partners through the Indo-Pacific region. We hope you enjoy this virtual performance as much as we enjoyed preparing it for you!” he said.

While talking about the long-distance collaboration, Udupa said, “The newly composed track with incredible musicians from the U.S. Air Force Band. The composition perfectly fits into the world music scene.”

The United States Air Force Band of the Pacific is a squadron of professional U.S. Air Force musicians that performs in diverse musical configurations and fulfills community relations and military functions throughout the Western Pacific region.

These ensembles present more than 200 performances annually, cultivating patriotism while enhancing cultural ties on behalf of the Pacific Air Forces and the U.S. Air Force throughout the Indo-Pacific region.

Udupa is an acclaimed Bengaluru-based Indian ghatam (percussion) artist with three decades of experience of collaborations with eminent artists across the world, and concert visits to more than 50 countries.

Udupa has performed at many prestigious venues in the world, including Carnegie Hall in New York City, the John F. Kennedy Center for the Performing Arts in Washington, D.C., and the Wortham Center in Houston, Texas.