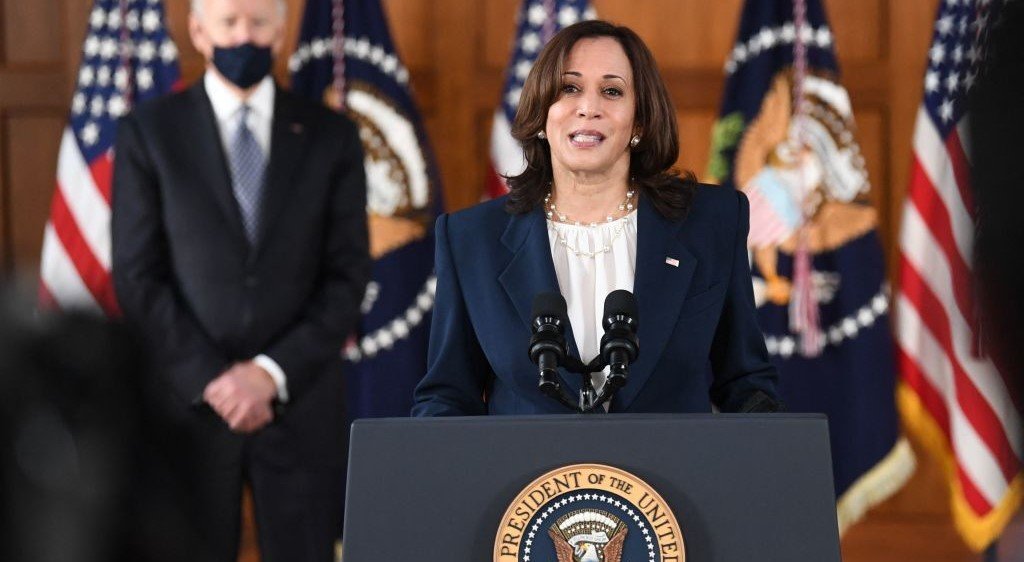 Vice President Kamala Harris speaks as President Joe Biden looks on during a listening session with Georgia Asian American and Pacific Islander community leaders at Emory University in Atlanta, Georgia on March 19, 2021. The Indian American vice president said everyone has “the right to be recognized as an American. Not as the other, not as them. But as us.” (Eric Baradat/AFP via Getty Images)

ATLANTA — President Joe Biden and Vice President Kamala Harris offered solace to Asian Americans and denounced the scourge of racism at times hidden “in plain sight” as they visited Atlanta, just days after a white gunman killed eight people, most of them Asian American women.

Addressing the nation after a roughly 80-minute meeting with Asian American state legislators and other leaders March 19, Biden said it was “heart-wrenching” to listen to their stories of the fear among Asian Americans and Pacific Islanders amid what he called a “skyrocketing spike” of harassment and violence against them.

“We have to change our hearts,” he said. “Hate can have no safe harbor in America.”

Biden called on all Americans to stand up to bigotry when they see it, adding: “Our silence is complicity. We cannot be complicit.”

The president also called the shootings an example of a “public health crisis of gun violence in this country,” as his administration has come under scrutiny from some in his own party for not moving as swiftly as promised on reforming the nation’s gun laws.

Harris, the first Indian American to hold national office, said that while the motive of the shooter remains under investigation, these facts are clear: Six of the eight killed were of Asian descent and seven of them were women.

“Racism is real in America. And it has always been. Xenophobia is real in America, and always has been. Sexism, too,” she said. “The president and I will not be silent. We will not stand by. We will always speak out against violence, hate crimes and discrimination, wherever and whenever it occurs.”

She added that everyone has “the right to be recognized as an American. Not as the other, not as them. But as us.”

Before leaving Washington, Biden declared his support for the COVID-19 Hate Crimes Act, a bill that would strengthen the government’s reporting and response to hate crimes and provide resources to Asian American communities.

Activists have seen a rise of racist attacks. Nearly 3,800 incidents have been reported to Stop AAPI Hate, a California-based reporting center for Asian Americans and Pacific Islanders, and its partner advocacy groups, since March 2020.

India-West Staff Reporter adds: According to a report on kfgo.com, only South Carolina, Arkansas and Wyoming have no hate crime laws. In North Carolina, some state senators are preparing to resubmit the “Hate Crimes Prevention Act” for a third time after attempts fizzled earlier.

The bill would expand the scope of hate crimes to include ethnicity, gender identity and sexual orientation, while also funding the creation of a hate crimes database and training for law enforcement, said the report.

“The reintroduction of this bill has garnered more attention than ever before,” he said.