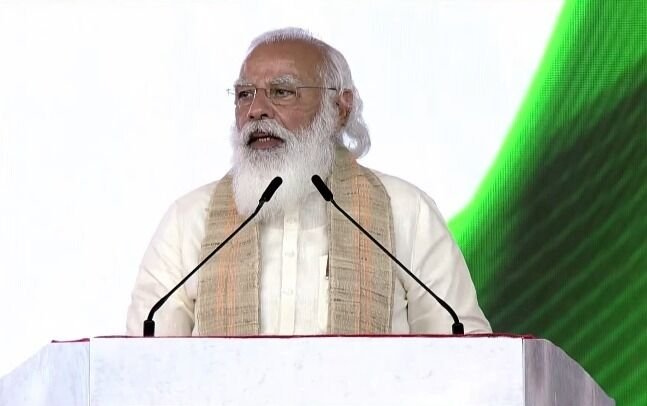 Indian Prime Minister Narendra Modi wrote to Pakistani Prime Minister Imran Khan to congratulate him on the country’s annual Pakistan Day, which commemorates March 23, 1940. On that day the Muslim leadership in the eastern city of Lahore demanded independence from British rule. (IANS photo)

ISLAMABAD — Indian Prime Minister Narendra Modi has sent a letter to his Pakistani counterpart saying he desires cordial relations with Pakistan, officials said March 23, in what appeared to be a rare peace overture.

Modi wrote to Imran Khan to congratulate him on the country’s annual Pakistan Day, which commemorates March 23, 1940. On that day the Muslim leadership in the eastern city of Lahore demanded independence from British rule.

Two senior officials at Pakistan’s Foreign Ministry confirmed the contents of the letter to The Associated Press. They spoke on condition of anonymity in line with government policy.

“As a neighboring country, India desires cordial relations with the people of Pakistan,” Modi wrote in the letter, but added: “For this, an environment of trust, devoid of terror and hostility, is imperative.”

The development comes days after Khan expressed his desire for good relations with India, but said the first step should be taken by India as his past peace overtures were not positively received.

The letter also comes days after Pakistan’s powerful army chief Gen. Qamar Javed Bajwa, at a seminar on security issues in Islamabad, called for a peaceful resolution in the disputed region of Kashmir and for peace talks with archrival India.

The disputed Himalayan region is split between Pakistan and India but claimed by both in its entirety. The two countries have fought two of their three wars over Kashmir since gaining independence from Britain in 1947.