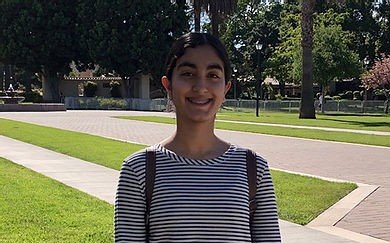 The virtual event, organized through Kaur’s No App Maker Left Behind, which she co-founded along with Ashvin Maheshwar in June 2018, is scheduled for March 27.

Leveraging the MIT App Inventor, Kaur says she has volunteered and taught young students in Fremont and Union City libraries throughout her freshman and sophomore years, and successfully hosted a hackathon in Fall 2019.

Since the onset of the COVID-19 pandemic, Kaur said she redesigned her curriculum and took her classes virtual. Additionally, she said she volunteered her time twice a week to teach third through sixth grade students online.

Kaur has since taught six online sessions with approximately 10 kids per session and has expanded her organization nationally, with six chapters in the San Francisco Bay Area and Texas, and two more on the way.

“I am working on taking the organization across boundaries. I am currently discussing how to bring in students to both teach and learn from Azerbaijan,” she said in an email to India-West.

According to her bio on the No App Maker Left Behind website, Kaur is very interested in technology and engineering and has created several programs with languages such as HTML, CSS, Python, JavaScript.

When she realized how simple it is to make apps using App Inventor, her interest in app development grew further.

Maheshwar, who is now in college, has an interest in computer science and has actively worked with several programming languages like Scratch, Python and Java, his bio says.

He discovered the simplicity of app development using tools such as App Inventor and realized it could be accessible to all and easy to use.

No App Maker Left Behind is a Bay Area based organization that teaches school kids the art of app development in a fun and exciting way.

Creativity in engineering and computer programming is an important step in developing our brain and will greatly help prepare kids for careers in these fields, the website description adds.

​Maheshwar created an initial curriculum which will be launched as a weeklong summer program at the Silicon Valley Boys and Girls Club in San Jose.

More information about No App Maker Left Behind can be found by visiting www.appkidventor.com.