HomeIndiaIndia and the worldOregon Tech President Nagi Naganathan Says He Will Not Resign, Despite Faculty Senate Resolution 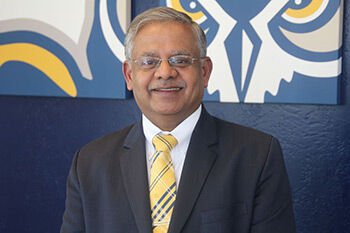 Oregon Tech’s Indian American president Nagi Naganathan says he will not resign, despite faculty urging him to do so. (oit.edu photo)

The morning after the Oregon Tech faculty senate called for university president Nagi Naganathan’s resignation, administrators at the school said he had no plans to leave his post.

Herald and News reports that the senate approved the resolution about 9 p.m. March 16. It stated that faculty had lost confidence in Naganathan’s leadership.

“This is not knee-jerk,” Prof. Don McDonnell said in the report. “This is not COVID. This is not union negotiations, because all of these feelings were in place before we experienced any of those.”

McDonnell, who is a professor of medical imaging technology at the school, will soon present the resolution to Naganathan asking him to resign. If the Indian American university president chooses not to, all full-time faculty will vote whether or not they have confidence in Naganathan’s leadership the week of March 29.

McDonnell said he would give a presentation to the 15-member Board of Trustees, who then have the power to remove Naganathan or keep him in office, on April 8, according to the report.

The chair of the Board of Trustees, Jessica Gomez, said March 18 that board members she has talked to are happy with the direction of the university and fully support Naganathan’s leadership.

“The board is very happy with the direction of the university,” she said. “We feel that Dr. Naganathan is doing a great job, and so there’s no reason to move forward with any of that.”

She said that the resolution declaring no confidence stems from a labor dispute.

“I understand that the faculty senate might be frustrated in some ways,” said Gomez in the report. “We’re in the process of contract negotiations and things like that, and that can increase tensions around campus. But over the last four years under Dr. Naganathan’s leadership, we have seen some of the biggest investments in Oregon Tech for probably the last 20 years.”

OIT’s vice president of institutional advancement, Ken Fincher, said Naganathan has no plans to leave the position. Fincher called him an “agent of change” and claimed that faculty are afraid of new ideas that are needed to move the university forward, the report added

McDonnell said faculty feel that the change Naganathan is instituting is detrimental to the school.

Naganathan addressed the faculty senate during the March 16 virtual meeting. He and Fincher feel the senate vote was led by a few disgruntled employees speaking for the majority. Faculty senate representatives refuted that during the meeting, reminding Naganathan that they represent their faculty constituents, many of whom thought the organization waited too long to confront Naganathan, according to the publication.

They include “disregard of existing Oregon Tech policies and the editing of policies without senate approval”; “lack of commitment to shared governance as established by the Board of Trustees”; and “failure to execute responsible fiscal management of Oregon Tech monetary, capital and human resources.”

The report cites examples of each charge. It claims that the tenure process was violated, positions were created and filled without faculty input, and budget concerns were raised despite increased state funding and revenue, according to Herald and News.

Fincher refuted the claims in the report and said many of them were taken out of context or were flat out wrong. He called the way the faculty senate reached back years to issues that occurred — and maybe were even solved — “revisionist history.”

Fincher said Naganathan went through the tenure process, and it came before the Board of Trustees and the necessary departments. He also pointed to the fact that the university is routinely audited, both internally and externally by a state auditor, the report said.

In the meantime, Fincher said Naganathan and other senior administrators plan to continue with business as usual, operating the school and educating students.