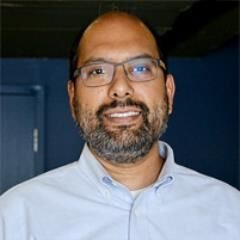 Indian American Chirag Mehta was part of a group of parents who pushed to remove racist biologist Louis Agassiz’s name from a Chicago, Illinois, elementary school in 2017. The Chicago Board of Education voted on the name change March 24. (Chirag Mehta/Twitter photo)

CHICAGO – A Chicago elementary school long named for a biologist who promoted racist ideology will be renamed for abolitionist Harriet Tubman.

An effort by a group of parents, including Indian American Chirag Gupta, to rename the school three years ago stalled over cost concerns. The effort was revived last year as demonstrations erupted over the death of George Floyd at the hands of Minneapolis police. The Chicago Board of Education voted on the name change March 24.

The Swiss-born Agassiz, who lived in the 19th century and was educated in Germany, was a believer in eugenics, the idea that some characteristics and African and African American people are inferior to others and should be bred out of humanity. He was a professor at Harvard University and is celebrated for his contributions to the study of natural science.

Tina Holder King, a parent representative on the school’s school council, was part of the group pushing for a name change. Tubman’s name was chosen over Katherine Johnson, who performed orbital mechanics calculations for NASA, and civil rights legend Rosa Parks.

Mehta, who was part of a 2017 push to remove Agassiz’s name, said the biologist’s ideas played a pivotal role in justifying the racism that continues to be seen. Agassiz’s justification of white supremacy is reason enough to take his name off the school.

India-West Staff Reporter adds: Mehta previously told the Chicago Tribune that Agassiz was an important figure in laying the groundwork for the anti-Blackness that “fueled the anti-abolitionist movement, that fueled the backlash against Reconstruction, that fueled the Jim Crow era.”

“He played a pivotal role in providing pseudoscientific justification for a lot of the racism we see and experience today. He wielded power as a scientist, and he used that to provide cover and justification for white supremacy. That they put his name on a school, an institution of education, is all the more reason for us to interrogate his history. And it’s all the more reason for us to take the name off the school,” Mehta was quoted as saying by the publication.

According to WTTW (Chicago PBS), the Chicago Board of Education voted March 24 to approve the name change of Louis Agassiz Elementary School to the Harriet Tubman International Baccalaureate World School.

Mehta, policy and ideas director at Community Change, reacted to the board’s decision on Twitter, writing, “This is a huge victory for the members of our school community who started this effort years ago, faced the usual reactionary hostility, but kept going. This is but one piece of the racial equity work that needs doing in our school and the district. But it still feels great.”