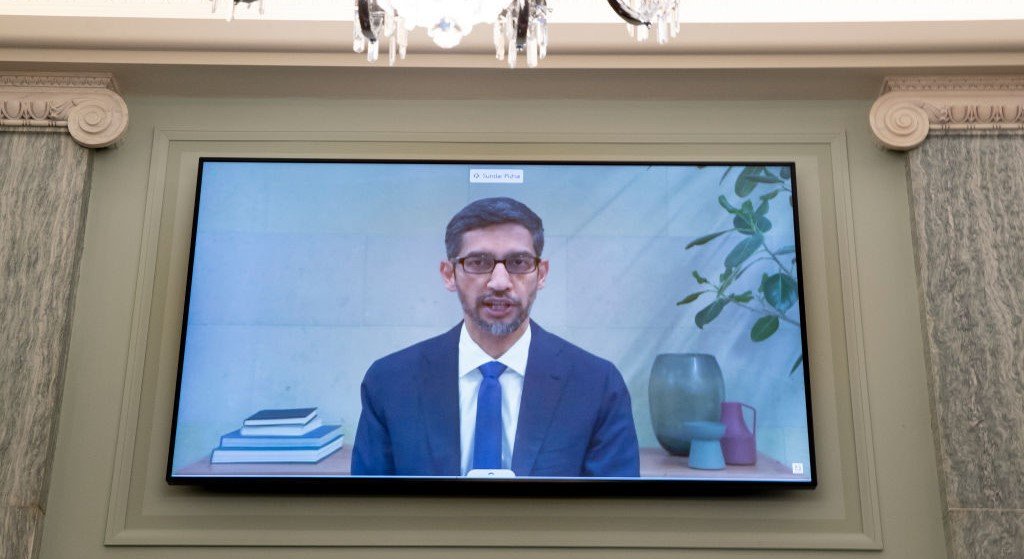 WASHINGTON – The CEOs of social media giants Facebook, Twitter and Google faced a grilling March 25 as lawmakers tried to draw them into admitting responsibility for helping fuel the January insurrection at the U.S. Capitol and rising COVID-19 vaccine misinformation.

In a hearing by the House Energy and Commerce Committee, lawmakers pounded Facebook CEO Mark Zuckerberg; Sundar Pichai, the Indian American CEO of Google, which owns YouTube; and Twitter chief Jack Dorsey over their content policies, use of consumers’ data and media use by young children.

Republicans raised long-running conservative grievances, unproven, that the platforms are biased against conservative viewpoints and censor material based on political or religious viewpoints.

There is increasing support in Congress for legislation to rein in Big Tech companies. “The time for self-regulation is over. It’s time we legislate to hold you accountable,” said Rep. Frank Pallone, D-N.J., the committee’s chairman.

That legislative momentum, plus the social environment of political polarization, hate speech and violence against minorities, was reflected in the impatience of panel members as they questioned the three executives. Several lawmakers demanded yes or no answers and repeatedly cut the executives off.

“We always feel some sense of responsibility,” said Pichai. Zuckerberg used the word “nuanced” several times to insist that the issues can’t be boiled down. “Any system can make mistakes” in moderating harmful material, he said.

The three staunchly defended their companies’ efforts to weed out the increasingly toxic content posted and circulated on services used by billions of people while striving to balance freedom of speech.

Democrats are laying responsibility on the social media platforms for disseminating false information on the November election and the “Stop the Steal” voting fraud claims fueled by former President Donald Trump, which led to the deadly attack on the Capitol. Rep. Mike Doyle, a Pennsylvania Democrat, told the CEOs that the riot “started and was nourished on your platforms.”

Support is building for Congress to impose new curbs on legal protections regarding speech posted on their platforms. Both Republicans and Democrats — including President Joe Biden as a candidate — have called for stripping away some of the protections under so-called Section 230 of a 25-year-old telecommunications law that shields internet companies from liability for what users post.

The tech CEOs defended the legal shield under Section 230, saying it has helped make the internet the forum of free expression that it is today.

IANS adds: Meanwhile, Pichai, in a fresh effort to reskill millions in the new normal, has announced new initiatives, including opening up enrollment for latest career certificates, expanding employer consortium and new tools to improve the job search.

“We’re also announcing a new Associate Android Developer Certification, which prepares learners for entry level jobs in Android development. With 1.3 million jobs open in these fields right now in the U.S., the opportunity is significant,” he said in a statement. “We’re also providing 100,000 scholarships to be distributed through nonprofits, workforce development boards, and other community organizations.”

“We’re also opening applications for Google’s apprenticeship program in our Career Certificate fields in addition to a few other professional tracks. We will hire hundreds of apprentices over the coming years to participate in on-the-job training and applied learning,” Pichai said. “In India, we’re working to make certificates more accessible and launch an employer consortium. And in addition to our Career Certificates, we’re also making our cloud computing, big data and machine learning trainings free for U.S. job seekers to help prepare for jobs in these high-growth fields.”

Also, in a bid to support the economic empowerment of women in India, Pichai announced $25 million in grants to non-profits and social enterprises in India and around the world March 8.

Pichai also committed to helping one million women in rural villages in India become entrepreneurs through business tutorials, tools and mentorship as part of the Google Internet Saathi program.

“Women are almost twice as likely to lose their jobs during the pandemic and an estimated 20 million girls are at risk of not returning to school. We have the opportunity to build a future that is more equal and more inclusive – and we must take it,” Pichai said during the virtual ‘Google for India’ event.

The company also announced $500,000 Google.org grant to the Nasscom Foundation to support 100,000 women agriculture workers with digital and financial literacy.

In related news, Pichai-run Google recently launched a scathing attack on Microsoft, accusing the Satya Nadella-run enterprise of willing to break the way the open web works in an effort to undercut a rival.

The attack came as Microsoft president Brad Smith, who on March 12 issued a testimony for the House Committee on the Judiciary looking into antitrust and commercial aspects of competition for a free and diverse press, slammed Google for hampering the growth of news organizations.

The fight between two tech giants comes as the U.S. is debating a new bill that would allow news organizations to collectively negotiate with platforms like Facebook and Google the terms in which their content is distributed online.