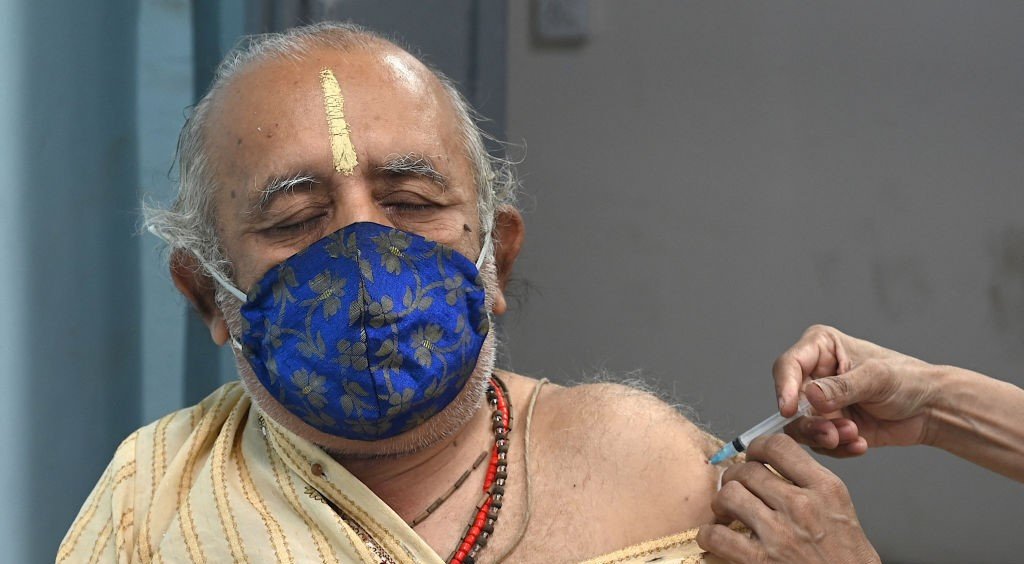 An elderly man reacts on being inoculated by a medical staff with the Covishield vaccine as part of the nationwide Covid-19 coronavirus vaccination drive at the Rajawadi hospital in Mumbai on March 17. The new “double mutant” COVID variant from India has been confirmed in at least one case in the San Francisco Bay Area. “This is not surprising or strange,” Indian American physician Nirav Shah, Senior Scholar at Stanford University’s Clinical Excellence Research Center, told India-West. “What we’re seeing is nothing extraordinary. Every virus evolves over time: a spike protein may bend a little differently.” (Indranil Mukherjee/AFP via Getty Images)

Lisa Kim, a spokeswoman for Stanford Health Care’s School of Medicine, told India-West: “We believe this is the first described case with this variant in the United States.”

The India variant has the L452R mutation found in the California variant, as well as another significant spike mutation, E484Q. This same position is mutated to a different amino acid (K) in both the South Africa and Brazil P1 and P2 variants, said Kim.

The new double mutant variant has shown up in at least 20 percent of COVID cases in Maharashtra, which is experiencing a huge resurgence in the number of daily infections. Even as the state races to vaccinate all of its residents, it has logged almost 50,000 new cases per day for the past seven days.

“This is not surprising or strange,” Indian American physician Nirav Shah, Senior Scholar at Stanford University’s Clinical Excellence Research Center, told India-West. “What we’re seeing is nothing extraordinary. Every virus evolves over time: a spike protein may bend a little differently.”

In theory, a double mutant variant should spread faster, said Shah, noting that — traditionally — faster spreading variants are also more lethal. He added that the Indian variant probably arrived in the U.S. via someone hopping on a plane.

The easy spread of the vaccine demonstrates the urgency for global herd immunity, which will occur when 60-70 percent of the world is resistant to the strains of the virus.

The B117 variant which originated in the United Kingdom, has emerged in 30 percent of COVID infections in the U.S. and is likely to become the dominant strain, said Dean of the Brown University School of Public Health Ashish Jha, at a press briefing March 11.

The B117 variant transmits from one person to the next about 50 percent faster than the original strain, and is 60 to 70 percent more deadly, according to the Centers for Disease Control.

Vaccines are less effective against the 1351 variant, first identified in South Africa, and the P1 variant from Brazil, two other variants of concern for the CDC.

“If you didn’t have an urgency to get a vaccine, you should have one now,” Shah told India-West, advising readers to get vaccinated as soon as possible, and to continue with protective protocols, such as wearing masks, frequently washing hands, and social distancing.

The U.S. State Department issued a travel advisory for India Feb. 16, terming the country a Level 2 — out of four tiers — for travelers to “exercise extreme caution.” Its concerns about travel to the country were based on civil unrest and terrorism, rather than COVID.

A spokesman for the State Department told India-West the agency had no immediate plans to change its travel advisory, despite the surge of cases in Maharashtra.

Due to continued COVID restrictions, India is not issuing tourist visas or electronic travel authorization, nor honoring previously issued tourist visas at this time. Travel to India for tourism is not permitted, but some exceptions are being made for business travelers and people permanently moving to India. Before arriving, travelers must upload negative COVID test results to the Air Suvidha portal: the test must be taken 72 hours before travel.