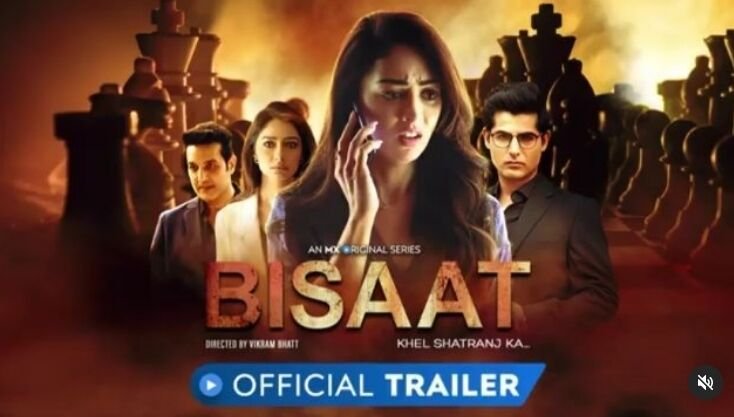 The poster for Vikram Bhatt’s “Bisaat.” (photo via IANS)

MUMBAI — Filmmaker Vikram Bhatt released the trailer of his upcoming web series “Bisaat” April 8. The eight-episode series directed by Bhatt stars Sandeepa Dhar and Omkar Kapoor, and explores the life of a psychiatrist who goes the extra mile to help her patients but lands in trouble.

“Thriller, as a genre, has always captivated me as a viewer, which is why I often tend to portray that on screen. As a storyteller, I enjoy cranking the tension up to its maximum and have audiences engrossed in the journey of my characters. ‘Bisaat’ is a tricky game that involves exposes, high stakes and emotional wreckage that promises to have you expecting the unexpected. The cast has done a fabulous job and I hope to work with each of them again,” said Bhatt.

Actor Omkar Kapoor, who rose to fame with “Pyaar Ka Punchnama 2” added: “This series is surely very special for me. Firstly, for its script and secondly, I got the chance to work with Vikram Bhatt, who is a fantastic narrator and director. He’s known for bringing the best out in his actors.”

Sandeepa Dhar said: “How can one say no to working with Vikram sir? His style of storytelling has so much panache and his narratives spin a twisted web of lies, deceit, and desperation that really shines on screen. This role required a lot of preparation and for someone who is always charged and ready to go, I had to imbibe a sense of acute calmness for Dr Kiyana’s role. I worked on my demeanor for a month before we started shooting and it’s been a great learning curve.”