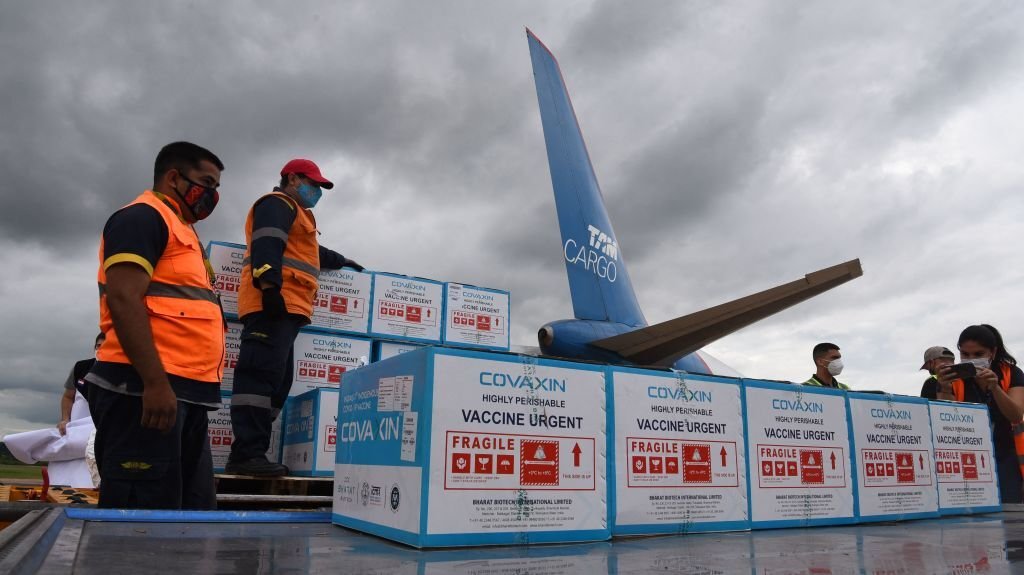 Boxes containing 100,000 doses of the Covaxin vaccine against COVID-19 donated by India are unloaded from a Tam airplane by workers upon their arrival at the Silvio Pettirossi International Airport, in Luque, Paraguay, on March 29. Paraguay received its first batch of 100,000 doses of Covaxin vaccines developed by Bharat Biotech pharmaceutical company, half of the total donated by India. (Norberto Duarte/AFP via Getty Images)

More than 15 billion doses of various COVID-19 vaccines are required to fight the global COVID pandemic, but can India, in partnership with the U.S., rise to meet the demand?

At an April 7 discussion — “Strengthening U.S.-India Pharma and Vaccine Diplomacy — jointly organized by the Confederation of Indian Industry and the U.S. Consulate in Mumbai, panelists noted that U.S. and India politics will stall the rate at which vaccines are distributed around the globe, and urged both countries to broaden their scope of vaccine diplomacy, in the mode of China, which has been aggressive in getting its vaccine into the developing world.

David Ranz, U.S. Consul General in Mumbai, kicked off the briefing. “There is great sadness at the toll this pandemic has taken on all of our lives. But this year, we have hope, as vaccines become available.”

The U.S.-India partnership is at the forefront of getting vaccines out to the world, said Ranz, noting that the two countries have an existing global supply chain via the Indo-U.S. Vaccine Action Program, a 36-year-old partnership focused on immunization and vaccines.

The U.S. has also been the largest contributor to the COVAX initiative, funding $4 billion to the initiative which aims to secure and equitably allocate two billion doses of COVID-19 vaccines by the end of 2021.

Suresh Jadhav, executive director of Serum Institute of India, the world’s largest manufacturer of vaccines, said 192 countries are expecting to get vaccines from the COVAX initiative. “This is not optimal,” he said, noting that the initiative had started as an attempt to get low-cost vaccines to the developing world, but has morphed into a geopolitical battle between nations who say “my country first.”

Jadhav stated that the U.S. must supply the raw material needed to make the vaccine. “If that is not assured, we will have to look for it elsewhere, slowing down the manufacturing process.”

Jadhav also spoke about balancing global vaccine diplomacy against India’s internal needs. “The sheer number of doses required is huge, and India is not manufacturing enough to meet its own needs.”

“If we do not have product sufficient for our own people, it is difficult to think our supply should be given to other countries,” he said.

About 85 million people in India have received at least one dose of the vaccine.

Jonathan Kimball, vice president of trade and international affairs at the Association for Accessible Medicines, said there has been considerable focus on Americans receiving the vaccine first. But sometime in June, all Americans will be fully vaccinated. “U.S. vaccine diplomacy will increase dramatically,” he said, noting that the U.S.-India partnership will play a critical role in vaccinating the world.

“Mutations are not new. Changes happen within the system of the virus. But Covid is different. This is going to be a challenge,” she said, noting that all currently available Covid vaccines have been out for less than a year, insufficient time to gauge efficacy against new mutant variants, which are rapidly emerging. Covaxin inactivates the entire cell, and has been tested successfully against the B117 UK variant, which is emerging as the dominant strain in the U.S. and elsewhere. Bharat Biotech is still testing Covaxin against the South African variant.

Ella noted that if Covid and its mutant variants behave like influenza, a yearly booster might be needed. She cautioned, however, that it was too soon to determine whether an annual shot would be necessary.

Bharat Biotech is based in Hyderabad. Ella discussed the challenges of developing Covaxin amid India’s national lockdown. Unlike other occupations, laboratory work must be performed onsite; besides developing Covaxin, the company had to keep producing its supplies of 15 other vaccines and four therapeutics. “We could not put our shipments on hold,” she said, noting that roads had completely shut down, and truck drivers had returned to their home villages. “We had to pull up our socks and persevere,” said Ella, noting that the Government of India provided 24/7 support for operations, cutting short its regulatory timeline.

Kimball noted that India’s supply chain was “bent, not broken” during the pandemic. “Indian companies are playing an incredible role in supplying pharmaceuticals to the world,” he said.