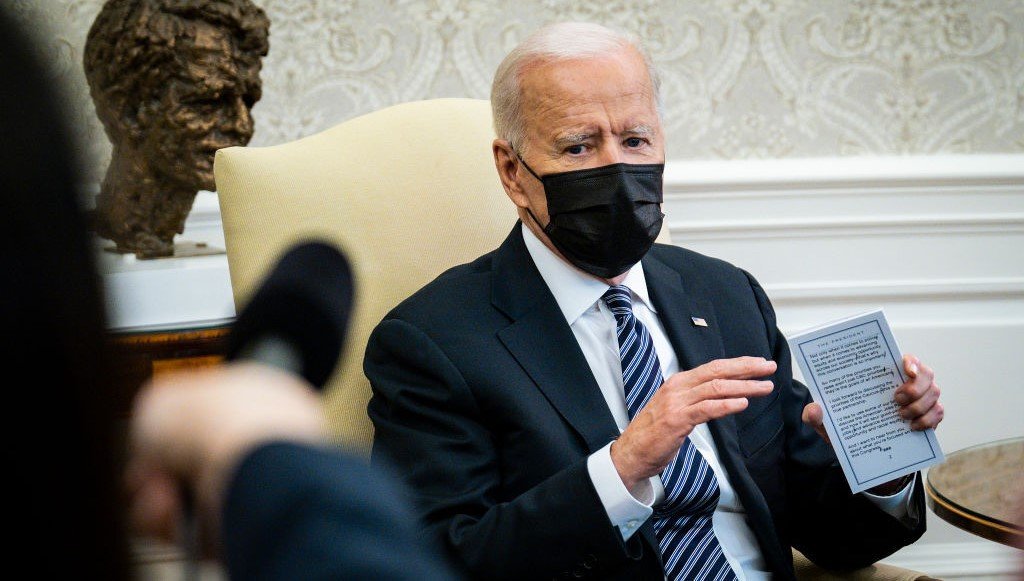 U.S. President Joe Biden meets with members of the Congressional Black Caucus in the Oval Office at the White House on April 13, 2021 in Washington, D.C. (Pete Marovich-Pool/Getty Images)

UNITED NATIONS – India has been invited to an Afghanistan peace conference in Turkey to back up the slowed down negotiations in Qatar between the Taliban and the Kabul government ahead of a delayed U.S. withdrawal from that country, according to diplomatic sources.

The convening of the meeting announced at the UN and in Istanbul April 13 comes amid reports that U.S. President Joe Biden would be withdrawing U.S. troops from Afghanistan by September 11, instead of the May 1 deadline set by his predecessor Donald Trump.

Biden’s deadline is symbolic as it was the 9/11 al-Qaeda attack directed from the Taliban-ruled Afghanistan 20 years ago that started the U.S.-led invasion. Between 2,500 and 3,500 U.S. troops remain in Afghanistan, down from about 100,000 at the height of the deployment in 2010.

The conference, jointly hosted by the UN, Qatar and Turkey, is scheduled to be held over ten days, starting April 24 in Istanbul, the Turkish foreign ministry said without details about the participants.

The U.S. had pushed for the convening of the conference through the UN and notably had wanted India as a participant.

In a letter to Afghanistan President Ashraf Ghani, that was reported by TOLOnews, Secretary of State Anthony Blinken said that Washington was going to ask the UN to convene a conference with the participation of the foreign ministers and envoys of India, China, Russia, Pakistan, Iran and the U.S.

“These countries share an abiding common interest in a stable Afghanistan and must work together if we are to succeed,” he wrote.

Diplomatic sources at the UN said that the participation has been enlarged to 21 countries along with three international groups.

Regarding the invitation to India, a diplomatic source said that it was a recognition of its stake and an interest in resolving the situation in Afghanistan.

The Taliban has said that it would not attend the Istanbul meeting but the conveners sounded optimistic.

“It is important to have both the representatives of the Islamic Republic of Afghanistan and the Taliban,” UN Secretary-General Antonio Guterres’s spokesperson Stephane Dujarric said. “We understand deliberations are still going on and we very much hope they will participate.”

Negotiations between the Taliban and the Afghani government on power-sharing and peaceful transition had stalled ahead of the original U.S. troop withdrawal deadline, and as the U.S. Special Envoy Zalmay Khalilzad is still trying to seal a peace deal.

Dujarric, however, said he did not see a deadlock in Doha and added that the conference is “a way for the international community to bolster the work of the parties and to show a united front in a path forward.”

The Turkish Foreign Ministry said that the Istanbul conference was meant to speed up the intra-Afghan negotiations in Doha.

Its aim is to help the negotiators “reach a set of shared, foundational principles that reflect an agreed vision for a future Afghanistan, a roadmap to a future political settlement and an end to the conflict.”

Dujarric said that the conference is likely to have a hybrid model with some participants in person in Istanbul and others participating digitally with Guterres kicking it off “through modern technology.”

The timing of the conference, which will span May 1, appears to take into account the risk of the Taliban’s reactions to the U.S. troops remaining in the country on that date.