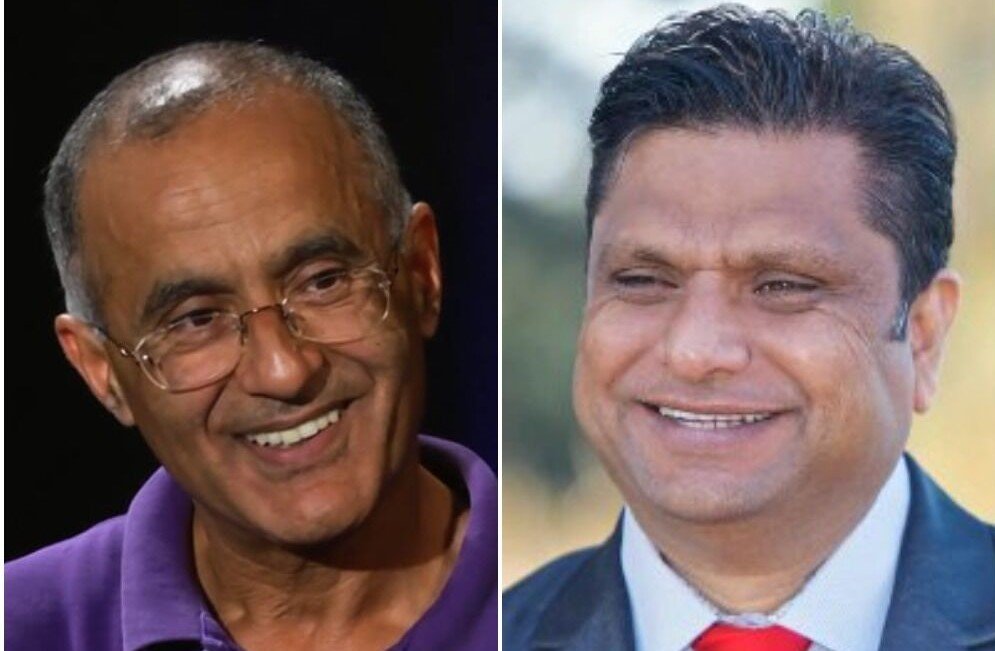 Indian American winemaker Dhruv Khanna (left) of Kirigin Cellars and aspiring politician Ritesh Tandon successfully sued California Governor Gavin Newsom, saying his “Blueprint for a Safer Economy,” established in the wake of the COVID pandemic, had hampered their rights to livelihood and freedom of speech. In a 5-4 decision issued April 9, the Supreme Court ruled on behalf of the plaintiffs. (YouTube photo/Twitter photo)

The Supreme Court April 9 ruled 5-4 in favor of two Indian Americans who had sued California Governor Gavin Newsom, saying their rights to livelihood and freedom of speech had been hampered by his restrictive COVID policies, which have limited indoor gatherings.

The lawsuit, Tandon vs. Newsom, was filed on behalf of aspiring Republican politician Ritesh Tandon, who launched a challenge to incumbent Congressman Ro Khanna, a Democrat, in California’s 17th district; and winemaker Dhruv Khanna, of Kirigin Cellars. Nine other plaintiffs in the lawsuit claimed Newsom’s “Blueprint for a Safer Economy” — established in the wake of the COVID-19 pandemic — had impinged on their right to worship at home or had created severe economic hardship to their business.

The Center for American Liberty, founded by Indian American attorney Harmeet Dhillon, partnered with the law firm Eimer Stahl to file the lawsuit.

On Aug. 28, 2020, Newsom released the “Blueprint for a Safer Economy,” which defined allowable activities by tiers for each county, based on the number of COVID infections, hospitalizations, and deaths. The most restrictive tier is purple, which allows for gatherings outdoors, but limits them to no more than 60 people. Indoor gatherings were limited to a maximum of three households. Most California counties have remained in the restrictive purple tier throughout the pandemic.

Five other lawsuits, challenging the restriction on prayer services, have also been heard by the Supreme Court.

In the lawsuit, Tandon claimed that he wanted to host outdoor gatherings of more than 60 persons to share his message about why was running for Congress and how best to represent CD 17.

“Before Governor Newsom issued the first safer-at-home order, Tandon had generated significant support by way of traditional campaigning, such as fundraising events at the homes of friends, via invitations to concerts and speaker events, meet-the-candidate events and other gatherings, policy discussions, debates, and more. All these activities ground to a halt when the Defendants released the Orders,” read the lawsuit.

Tandon claimed he was unable to express his ideas in the critical weeks before election day. Khanna won the race with more than 71 percent of the vote.

Dhruv Khanna, of Kirigin Cellars, one of the oldest wineries in California, noted in the lawsuit that he has 10 acres of land to host outdoor events. Though Kirigin Cellars makes and sells small batch wines, the majority of the company’s income is derived from events, including youth soccer games, weddings, and corporate events. The state allowed outdoor weddings, religious services, cultural ceremonies, and protests, but with a maximum of 60 people. As a result, Khanna claimed, 30 planned events were canceled and Kirigin has had to cut payroll by 30 percent.

“Where the government permits other activities to proceed with precautions, it must show that the religious exercise at issue is more dangerous than those activities even when the same precautions are applied,” said the justices in their ruling, noting that hair salons, retail stores, personal care services, movie theaters, private suites at sporting events and concerts, and indoor restaurants were allowed more flexibility than religious gatherings.

Moreover, ruled the justices, California state did not conclusively prove that indoor gatherings carry a greater risk of harm.

Kagan relied on the lower court’s ruling, stating that indoor gatherings do pose more risk for becoming infected with COVID. “When people gather in social settings, their interactions are likely to be longer than they would be in a commercial setting with participants more likely to be involved in prolonged conversations,” she quoted from the Ninth Circuit ruling.

“Second, private houses are typically smaller and less ventilated than commercial establishments. And third, social distancing and mask-wearing are less likely in private settings and enforcement is more difficult,” wrote Kagan, citing the earlier ruling. “These are not the mere musings of two appellate judges: The district court found each of these facts based on the uncontested testimony of California’s public-health experts,” she added.