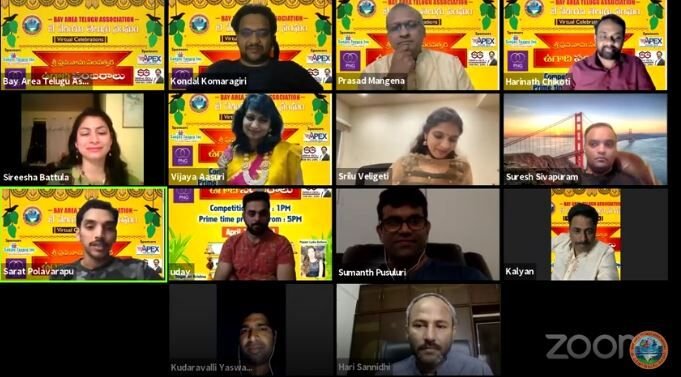 The Bay Area Telugu Association recently hosted its annual flagship event, the celebration of Ugadi Sambaralu. Due to the coronavirus pandemic, the event was held online this year.

The event, which started at 1:00 p.m. with a youth talent show, comprised of dances, songs and other special talents. Cultural programs continued until 9 p.m.

There was an overwhelming response to the competitions this year, said the organization. Over 100-plus kids, teens and adults enthusiastically participated in classical, folk/film singing, dancing and special talent, it said.

Krishna recalled his fond memories of performing in the San Francisco Bay Area with legendary S.P. Bala Subrahmanyam – who died of Covid in 2020 – and also paid tribute to the late singer with a medley of his hits and other recent Tollywood hits.

BATA president Yaswanth Kudaravalli thanked the participants and volunteers for making this yet another grand event.

In the end, the advisory board of BATA – Jayaram Komati, Vijaya Aasuri, Veeru Vuppala, Prasad Mangina, Karun Veligeti, Ramesh Konda and Kalyan Kattamuri congratulated the team for making the program a grand success.

Chikoti thanked the BATA team for entrusting him with the responsibility and mentioned that he will work closely with all the team members in planning for the 50th anniversary of BATA, which is planned for Ugadi 2022.