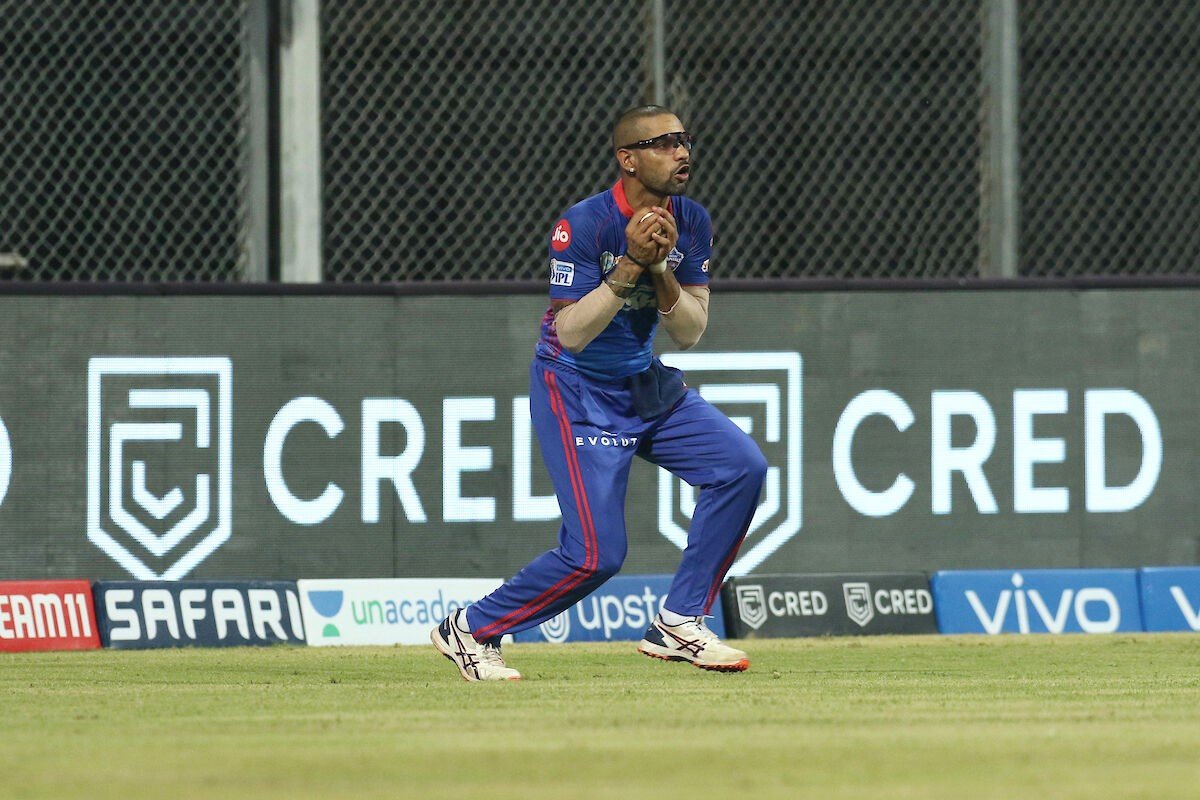 Shikhar Dhawan of Delhi Capitals takes a catch during a match between Delhi Capitals and Punjab Kings at the Wankhede Stadium in Mumbai April 18. (IPL Twitter/ANI photo)

The dew at Wankhede Stadium didn’t help Punjab’s bowlers to contain Dhawan, who smashed 13 fours and two sixes. Prithvi Shaw played a cameo of 32 off 17 as Delhi raced to 59 inside the first six overs.

Dhawan missed out on a deserved century when he was clean bowled by Jhye Richardson in the 15th over before Marcus Stoinis finished off the game with an unbeaten 27 off 13 balls.

“We were under pressure at the start because the wicket was not doing much and they had a good start,” said Delhi captain Rishabh Pant.

Earlier, Delhi recovered well to contain Punjab after Mayank Agarwal (69) and captain Lokesh Rahul (61) had featured in a 122-run opening stand off 76 balls.

“Victory would’ve been sweet on my birthday,” Rahul said.

In the early game, Glenn Maxwell and AB de Villiers shone with the bat as Royal Challengers Bangalore rounded off its Chennai leg of the event with third win in a row.

“We got 40 extra runs on that pitch which slowed down,” Kohli said. “There are areas we can work on. We’re not getting ahead of ourselves and not getting over-excited.”

After losing Kohli for just five in the second over, Maxwell dominated spinners and fast bowlers on a wicket where the ball nicely came onto the bat. Maxwell was finally outdone by fellow Australian Pat Cummins’ short-pitched delivery in the 17th over as he top edged a pull to short fine leg.

De Villiers and Jamiesen smashed Andre Russell for 38 runs off his two overs and Harbhajan Singh conceded 18 off the penultimate over as the last 18 balls yielded Bangalore 56 runs.

Russell (31), captain Eoin Morgan (29) and Shakib Al Hasan (26) all scored better than a run-a-ball, but Bangalore kept taking wickets at regular intervals to end its Chennai leg of the event with three wins from three games.

Kolkata is in the bottom half of the table with two points after winning one game and losing two.