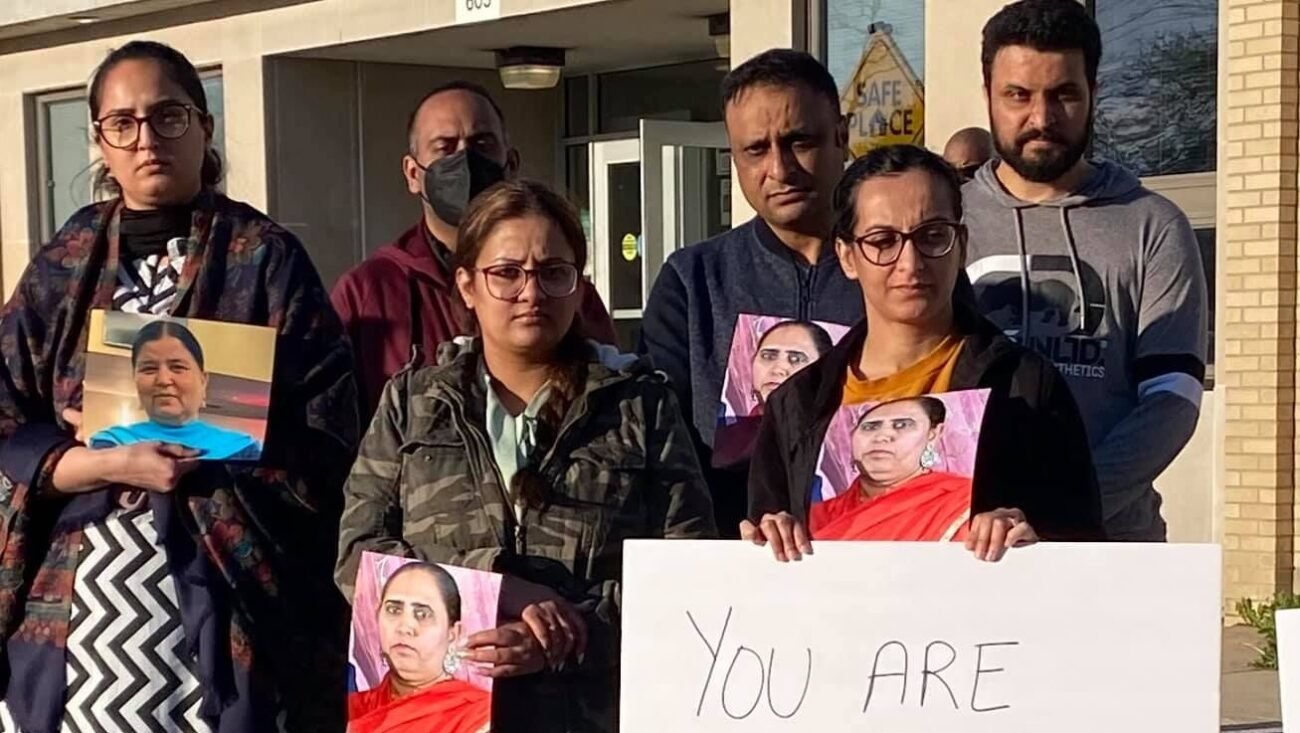 Family and friends mourn the murder of Jasvinder Kaur, 50, and Amarjit Sekhon, 48, two of the eight people killed late night April 15 at a FedEx facility in Indianapolis, Indiana. Nineteen-year-old Brandon Hole has been identified by police has having killed Kaur, Sekhon, and others in the parking lot outside the facility before entering the building, where he began to randomly shoot before killing himself. Four Sikh Americans were killed in the mass shooting. (Indianapolis Metropolitan Police Department photo)

The Indian American community is calling for a hate crime investigation of the late-night April 15 mass shooting at the FedEx facility in Indianapolis, Indiana, at which 19-year-old Brandon Hole killed eight people, including four Sikh Americans, and injured at least seven others before killing himself, police said.

“It’s imperative that authorities fully investigate whether this attack may have been driven by anti-Sikh motivations,” said Rep. Raja Krishnamoorthi, D-Illinois, in a statement issued April 17. He noted that the facility was known to be heavily staffed by Sikh American employees, and also noted that the fatal attack comes amid an unprecedented level of violence over the past year against the Asian American community.

“While the Indianapolis and Sikh communities continue to mourn, and as the rest of our country mourns with them, investigators must also determine if this mass shooting was a hate-motivated attack in addition to serving as another example of the plague of gun violence which has beset our nation,” said the congressman.

The Sikh Coalition also called for a hate crime investigation. “We fully expect that authorities should and will conduct a full investigation, including the possibility of bias as a factor,” said Satjeet Kaur, the Sikh Coalition’s executive director. “Further traumatizing is the reality that many of these community members, like Sikhs we have worked with in the past, will eventually have to return to the place where their lives were almost taken from them,” she said in a press statement.

Breaking news alert: On April 20, the Sikh Coalition said new information has emerged indicating that, in March of 2020, IMPD officers learned that the shooter had been on white supremacist websites. Accordingly, the Sikh Coalition is strongly reinforcing its initial demand that the investigation take the possibility of a bias motive seriously.

“The Sikh community will continue to demand complete transparency in this investigation,” said Kaur. “We are again calling on local, state, and federal lawmakers to take seriously the possibility that the shooter specifically targeted this facility—well known to him, and well known for employing Sikhs and a diverse staff more broadly—for his deadly assault.”

The web portal Stop AAPI Hate has logged more than 3,800 reports of anti-Asian hate violence or bias since March 2020. The sharp uptick in hate crimes against the AAPI community is attributed to former President Donald Trump’s blaming of China for causing the COVID-19 pandemic.

According to police reports, at around 11 p.m. April 15 evening, police received calls that gunshots were being fired outside of the FedEx building. Hole, police said, walked through the parking lot shooting a rifle, killing four people in their cars before entering the building. He then entered the building and killed four others.

The shooting lasted less than four minutes and was over prior to police arriving at the scene. The Indianapolis Emergency Medical Services transported four victims to local hospitals, while a fifth victim was taken to another county. Two other victims received minor injuries and were treated by IEMS at the scene and released.

Each person who was transported is believed to have non-life threatening injuries, reported the IMPD.

There were at least 100 people in the facility at the time of the incident. Many were changing shifts and on their dinner breaks.

As news of the shootings broke, families tried to contact their relatives who were working at the site, but could not reach them, as FedEx has a no cell phone policy at its facilities. Relatives instead gathered at a local restaurant to await news.

Hole was a former FedEx employee and had last worked at that site in October of 2020. He was terminated for not showing up for work.

The presumptive killer was known to law enforcement. Police had gone to his home 13 months earlier: Hole made comments that he was going to point a recently purchased shotgun at police officers so they would shoot him, according to the IMPD. He was taken for psychiatric evaluation, and his shotgun was confiscated.

But Hole was nonetheless able to purchase a rifle in July 2020, and another that September. Both weapons were found at the murder scene.

Attending a vigil for the victims April 19 in Indianapolis, Republican Senator Todd Young, who represents Indiana, questioned how a young man with known mental health conditions was able to purchase two guns. “His family cried out for help and apparently didn’t receive the kind of attention they should have; he was later sold firearms according to accounts. That’s not supposed to happen in our system,” said Young.

Vigils attended by hundreds of people were held across the country April 18 and 19. At a vigil in Sacramento, California, Jasleen Kaur, a relative of Amarjeet Kaur Johal, said her grand aunt expressed her love through cooking.

“She was an angel amongst us all with her time on earth, and will continue to be so,” said Kaur. “When is it enough? How many children will be separated from their grandparents before something changes?” she said, as reported by The Sacramento Bee.

“I am heartbroken to confirm that my naniji (maternal grandmother), Amarjeet Kaur Johal, is among those killed in the senseless shooting at the FedEx facility in Indianapolis,” said community member Komal Chohan, in a statement released by the Sikh Coalition. “My nani, my family, and our families should not feel unsafe at work, at their place of worship, or anywhere. Enough is enough: our community has been through enough trauma.”

Rimpi Girn told The Washington Post that Sekhon and Kaur were her aunts. They worked on the 11 p.m. shift at FedEx, said Girn, who believes that the gunman may have killed them in their car in the parking lot, before entering the facility.

Singh had recently moved from Tracy, California, to Greenwood, Indiana, and had just started working at the FedEx facility. He was looking forward to his first paycheck, family members told The Washington Post, also noting that they may not be able to return his body to India because of the pandemic.

“This situation is very unfortunate and extremely heartbreaking. The loss from this devastating event is unfathomable and irrecoverable,” said Gurinder Singh Khalsa of SikhsPAC in a statement. “One of the most upsetting things about this tragedy is that it is not an isolated event. Situations like these are becoming a part of everyday life as an American.”