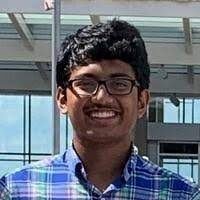 Several Indian American students were among the top finishers in the recent USA Brain Bee Championships.

The championships, held virtually April 10 through April 11 at the Northeast Ohio Medical University in Rootstown, Ohio, featured the 13th and 14th installments of the competition, with the 2020 taking place now due to the COVID-19 pandemic.

The competition involves five subtests: a neuroanatomy practical, brain imaging, patient diagnosis, clinical applications and a written one. The event was streamed live via Zoom with a live award ceremony on April 11 afternoon, the release said.

Behind Patel were a slew of South Asian Americans. In second place was California-based Risha Chakraborty, of Dougherty Valley High School; Zaid Siddiqui of Michigan was third; and Sampath Rapuri of Texas and Veda Dayananda of Georgia tied for fourth.

The 2021 national competition was won by Yashwanth Gokarakonda of Arkansas. Gokarakonda, of Little Rock Central High School, was representing the Society for Neuroscience Arkansas Chapter.

Other top finishers in 2021 included Neha Nedumaran of Arizona, who took third place.

Both the 2020 and 2021 USA champions will represent the United States in the 2021 World Brain Bee Championship that will be held this fall, the release noted.

Currently, there are about 250 Brain Bee chapters in about 49 countries in six continents.

“Its purpose is to motivate young students to learn about the human brain and inspire them to seek careers in the basic and clinical neurosciences to help treat and find cures for brain disorders. We build better brains to fight brain disorders,” Dr. Norbert Myslinski, who founded the International Brain Bee 23 years ago, said in a statement.

The USA Brain Bee, a neuroscience competition for teenagers ages 13 to 19, is an officially sanctioned Regional Brain Bee of the International Brain Bee. The USA Championship coordinator from Northeast Ohio Medical University is Dr. Dana Peterson, Department of Anatomy and Neurobiology.