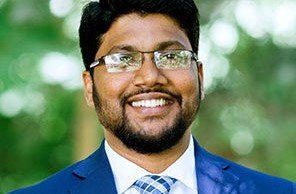 Ranga Dias, an American researcher originally from Sri Lanka at the University of Rochester, was among the university’s recent recipients of National Science Foundation CAREER Awards. (rochester.edu photo)

The University of Rochester April 20 announced that a group of its researchers were honored with National Science Foundation CAREER Awards, with Ranga Dias among them.

Dias was among five researchers at the university to receive the honor, NSF’s most prestigious recognition for early-career faculty members.

The award “embodies NSF’s commitment to encourage faculty and academic institutions to value and support the integration of research and education” and recognizes individuals “who have the potential to serve as academic role models in research and education and to lead advances in the mission of their department or organization,” the release notes.

Dias recently made Time magazine’s annual list of the top 100 individuals shaping their fields, by creating materials in his University of Rochester lab that are superconducting at room temperature.

The hydrogen-rich, binary compounds become superconducting only while compressed at extraordinarily high pressures inside a diamond anvil. Therefore, more work needs to be done to make them practical for commercial applications that could transform our power grids and transportation, reduce the costs of MRI machines, and make quantum superconductors more feasible, according to the release.

Dias will use his CAREER award to create ternary (three-component) and quaternary (four-component) compounds in a search for the right chemical structure and chemical bonding of materials that will remain superconducting when the pressure is removed, it said.

Dias, an assistant professor of mechanical engineering, as well as physics and astronomy, received his B.S. from the University of Colombo, Sri Lanka, in 2006 and his Ph.D. in physics from Washington State University in 2013.

He joined the University of Rochester after a postdoctoral fellowship in the Department of Physics at Harvard University, where he investigated the quantum phenomena in hydrogens at extreme conditions.

Dias is an internationally recognized scientist in the field of high-pressure physics, and his work has also been reported in popular press, such as New York Times, BBC, NBC, NPR, Physics Today, New Scientist, Chemistry World, Science News, and Nature News and Views.