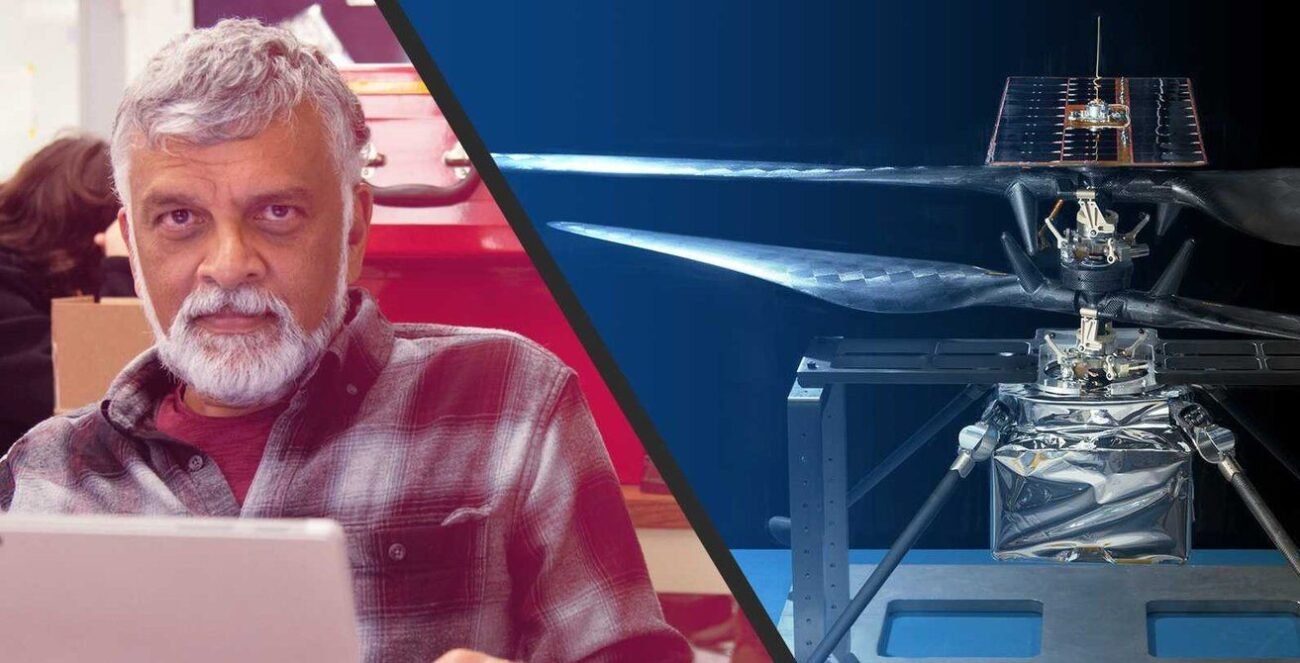 Bob Balaram wanted to fly on Mars. Now, NASA’s Jet Propulsion Lab at Cal Tech explains how he will be the chief engineer behind the Mars helicopter en route to the Red Planet. (jpl.nasa.gov photo)

Indian American Bob Balaram, the chief engineer behind the Mars Helicopter, which is riding to the Red Planet this summer with NASA’s Perseverance rover, explained how the mission came to be in a NASA report.

In the report published on NASA’s Jet Propulsion Laboratory at the California Institute of Technology’s website, Balaram explained that “everyone” told him the idea to fly into Mars was a crazy idea.

“All the time,” he added in the report.

This Mars Helicopter is currently at Kennedy Space Center waiting to hitch a ride to the Red Planet on the Mars Perseverance rover this summer, the report notes.

Although Balaram probably didn’t know it at the time, the seed for an idea like this sprouted for him in the 1960s Apollo era, during his childhood in South India, the report said.

His uncle wrote to the U.S. Consulate, asking for information about NASA and space exploration. The envelope they sent back, stuffed with glossy booklets, entranced young Balaram. His interest in space was piqued further by listening to the Moon landing on the radio, the feature continued.

Balaram would go on to earn a bachelor’s degree in mechanical engineering from the Indian Institute of Technology, a master’s and Ph.D. in computer and systems engineering from Rensselaer Polytechnic Institute, and a career at NASA’s Jet Propulsion Laboratory in Southern California.

That’s where he has remained for 35 years as a robotics technologist, his bio in the report said.

Balaram’s career has encompassed robotic arms, early Mars rovers, technology for a notional balloon mission to explore Venus, and a stint as lead for the Mars Science Laboratory entry, descent and landing simulation software, it said.

In the 1990s, Balaram attended a professional conference, where Stanford Prof. Ilan Kroo spoke about a “mesicopter,” a miniature airborne vehicle for Earth applications that was funded as a NASA Innovative Advanced Concepts proposal, it said.

This led Balaram to think about using one on Mars. He suggested a joint proposal with Stanford for a NASA Research Announcement submission and recruited AeroVironment, a small company in Simi Valley, California, according to the report.

The proposal got favorable reviews, and although it was not selected for funding at that time, it did yield a blade-rotor test under Mars conditions at JPL.

Then, at a conference at the University of Pennsylvania where a presentation was made about the use of drones and helicopters, Charles Elachi, then director of JPL, wondered whether something like this could be used on Mars.

A colleague of Balaram’s mentioned his previous work in that area of research, and Elachi asked him to write a new proposal for the competitive call for Mars 2020 investigation payloads.

Balaram and his team had eight weeks to submit a proposal, but though eventually the helicopter idea was not selected as an instrument, it was funded for technology development and risk reduction. Mimi Aung became Mars Helicopter project manager, and after the team worked on risk reduction, NASA decided to fund the helicopter for flight as a technology demonstration, the JPL report noted.

His physics background helped him envision flying on Mars, with the end result being a 4-pound helicopter with two pairs of light counter-rotating blades to slice through the Martian atmosphere.

About two-and-a-half months after landing at Jezero Crater, the Mars Helicopter team will have a window of about 30 days to perform a technology demonstration in the actual environment of the planet, starting with a series of vehicle checkouts, followed by attempts of first-ever flights in the very thin Martian atmosphere, according to the report.

If this “crazy idea” succeeds on Mars, it will be what Balaram describes as “kind of a Wright Brothers moment on another planet” – the first time a powered aircraft will have flown on Mars, or any planet besides Earth, the JPL report said.

This potential breakthrough could help pave the way for future craft that would expand NASA’s portfolio of vehicles to explore other worlds, it said.

It will also cache rock and soil samples for pickup by a potential future mission and help pave the way for future human exploration of Mars.