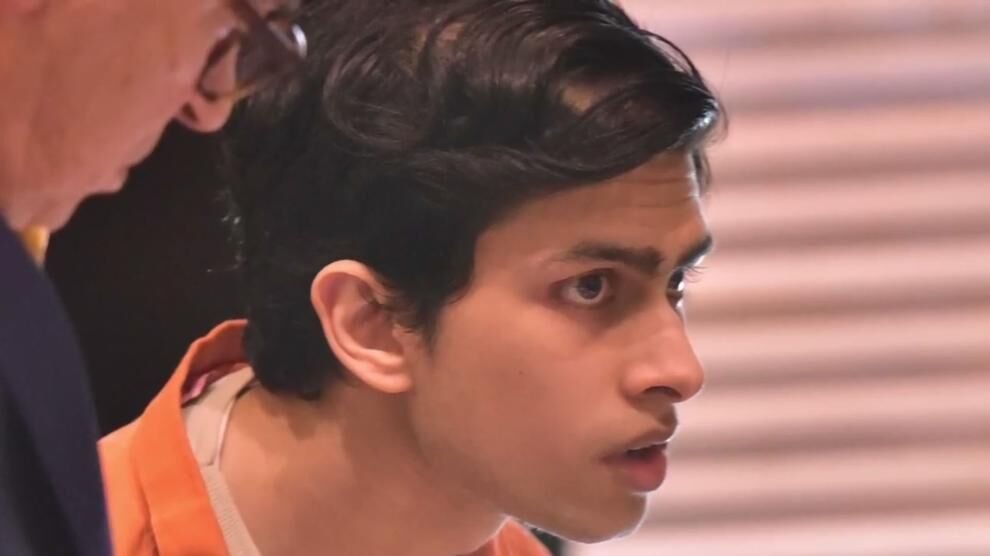 File photo of synagogue firebomber Aakash Dalal, who was sentenced to 35 years in prison for masterminding a series of bombings at Jewish temples in New Jersey. The young Indian American escaped a life sentence. (screen grab of northjersey.com video/https://njersy.co/2uGynTc)

HACKENSACK, N.J. – Two men convicted of carrying out attacks on Jewish communities in New Jersey that included the firebombing of two synagogues and throwing a Molotov cocktail into a rabbi’s home lost their bids to have their convictions thrown out April 15.

A state appeals court rejected numerous arguments by Indian American Aakash Dalal and Anthony Graziano, including that some evidence from a search of Dalal’s jail cell shouldn’t have been allowed in court, and a confession by Graziano to investigators after he spoke to his mother should have been suppressed. Graziano also argued his sentence was excessive.

The two, who were 19 at the time of the attacks in 2011, were convicted in separate trials in 2016 and sentenced to 35 years in prison under a state anti-terrorism law.

Their attack on the rabbi’s home in Rutherford occurred while the rabbi, his wife, five children and his parents were sleeping, according to authorities.

Dalal also was charged with conspiring to murder a Bergen County assistant prosecutor after a jailhouse informant alerted authorities. That gave rise to the search of Dalal’s cell, which yielded anti-Semitic writings and references to explosives as well as the names of judges and prosecutors.

Attorney Alan Zegas, representing Dalal, said he believes the anti-terrorism law is unconstitutional and that he is considering appealing the case to the state Supreme Court. A message was left with Graziano’s attorney.

India-West adds: The former Rutgers University student has consistently stated he was not in town when the string of bombings occurred in late 2011/early 2012. But prosecutors maintained that Dalal masterminded the bombings, showing Graziano how to make a Molotov cocktail and egging him on to commit further destruction.

The pair plotted the attacks via text messages. “I don’t trust you until you kill a Jew,” Dalal allegedly told Graziano via instant messenger, in evidence revealed during the five-week trial.

After a particularly heinous attack in Rutherford, New Jersey, which occurred while a rabbi and his family were sleeping in the building, the pair boasted about a Molotov cocktail hitting the rabbi’s bed.

“Next time, burn the place down,” said Dalal, via messaging. “Definitely,” said Graziano, who was found guilty of 19 counts of arson and bias intimidation in May 2016.

After the first firebombing at a Maywood, New Jersey, synagogue, Dalal urged Graziano to do more. “The Jews got what they deserved tonight. We should do another one in Paramus,” he wrote.

After a January attempt to firebomb Temple K’Hal Adath Jeshurun proved unsuccessful, Dalal told Graziano he had inflicted no damage. “You have not proved yourself,” he said.

Graziano asked Dalal how much damage would be acceptable.

“A total guttage,” replied Dalal, according to the text messages read out in court.

The two boasted about the damage they had inflicted, noting that the attacks were reported on television news (see earlier India-West story here).