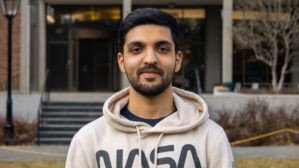 A satellite designed and built by an Indian American-led group at Brown University is being launched into space with the help of NASA.

NASA announced last month that a small satellite to be designed and built by Brown students has a ticket to ride on a future rocket launch. The news arrived just a few months after a prior Brown student-built satellite ended a successful mission of more than two and a half years in space, the university said in an April 21 release.

The new satellite, dubbed PVDX, is a cubesat — a class of miniature satellites ideal for doing low-cost science experiments or technology demonstration in space. Members of Brown Space Engineering, a student group, worked for three years to develop a mission plan and proposal for NASA’s Cubesat Launch Initiative, which uses auxiliary cargo space on rockets to send cubesats to space, it said.

Sarang Mani, a Brown senior and the group’s project manager and co-president, says the team is thrilled that NASA saw value in their project.

“It’s a huge validation of all the time and effort that everyone on the team has invested into this,” Mani said in the release. “I think it speaks volumes to the amazing pool of young people who are excited about space and are working to make it more accessible.”

The primary mission of PVDX, which stands for Perovskite Visuals and Degradation eXperiment, will be to test the performance of next-generation perovskite solar cells in the harsh orbital environment. Perovskites are emerging as a low-cost challenger to silicon for making highly efficient solar cells, according to the university.

A research team led by Brown Prof. Nitin Padture has made key contributions to the development of perovskites, and the BSE team will work with Padture’s group to develop perovskite cells for PVDX. The team aims to find out how this type of solar cell, which has never flown in space, performs in an environment where temperatures can swing by as much a 500 degrees Fahrenheit, it said.

PVDX’s secondary mission is to engage K-12 students in space exploration. The plan is to allow students to send short messages to the satellite, which will be displayed on an LED screen on one side of the spacecraft.

A camera attached to a small robotic arm on PVDX will snap a picture of the display — with an orbital view of the Earth providing the backdrop — and transmit that picture back to the students from space. The idea, the team says, is to help create excitement about space exploration, and to show students that getting there isn’t as difficult as they may think, the university said.