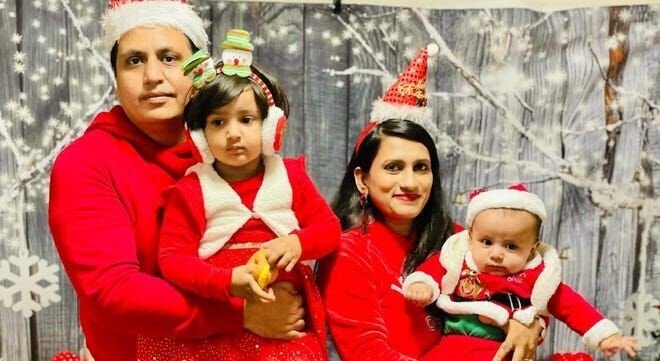 Ashher Aamir, a 36-year-old Indian American father from North Edison, New Jersey, died of COVID-19 April 25 in New Delhi. Aamir, who went to India to be with his sick mother, is survived by his wife and two kids, a 3-year-old daughter and an 8-month-old son. (GoFundMe photo)

As a deadly second wave of coronavirus infections wreaks havoc in India, at least two Indian American families are mourning the loss of their loved ones who recently traveled to India.

Ashher Aamir, 36, and Pradeep Kumar Verma, 45, both died in India of COVID-19 complications.

Verma leaves behind his wife and 9-year-old son Daksh, who has autism.

Aamir is survived by his wife and two kids, a 3-year-old daughter and an 8-month-old son.

GoFundMe campaigns have been launched to help both families cover funeral expenses, the children’s education and other financial support.

Verma, an IT professional from Manchester, Connecticut, had traveled to India to support his aging parents. He had no pre-existing medical conditions and followed a very healthy lifestyle, according to the fundraising page, ‘Support Pradeep Verma’s autistic son – Daksh Verma.’

“Family was of utmost importance to him, especially Daksh. He was always worried about Daksh’s future and worked really hard so that he could provide him the best education and medical care,” read the page, which described Daksh as a “beautiful, sweet, happy boy with a gentle soul who is unable to comprehend the loss and is still expecting his father to return from hospital to play with him.”

Daksh was diagnosed with autism when he was three and requires substantial support in social communication and repetitive behaviors, it said.

After years of being a stay-at-home mother, Verma’s wife, the page said, faces the task of being the sole caregiver for their child.

“This loss creates a huge financial burden since Pradeep was the sole provider for his family. We hope to help ease their financial worries with this fundraising,” the page further read. “The loss for family cannot be replaced, but we are hoping to do our bit to make things easy in whichever way possible. The funds will help out tremendously to help secure Daksh’s future, including his medical and education expenses, while they try to get back to life without Pradeep.”

Aamir, of North Edison, New Jersey, died April 25 from acute pneumonia and lack of oxygen after going to New Delhi during the second week of April to be with his mother, who was sick, and other family members during the month of Ramadan, according to the GoFundMe page, ‘Help Yasmin and 2 small kids post loss of husband.’

The page notes that just a few days after arriving in India, Aamir and the rest of his family fell ill. Over the next few days, his condition continued to deteriorate in the hospital.

“As many of you are aware the situation in Delhi, India, is bad and there are no beds, doctors, proper medication and oxygen in hospitals for the needy. The same fate Ashher had to dealt with,” according to the page, which remembered him as a “great father, husband, friend, colleague,” adding that “nothing can replace this unbearable loss.”

The fundraiser, organized by Amit Joshi, says that funds raised “will provide the monetary support for the bereaved family which can help in funeral expenses, kids’ education and family support during these difficult times.”