HomeIndiaIndia and the worldBREAKING: Rumors of India-Returned Covid-Positive Patients Admitted at Washington Hospital in Fremont Are False 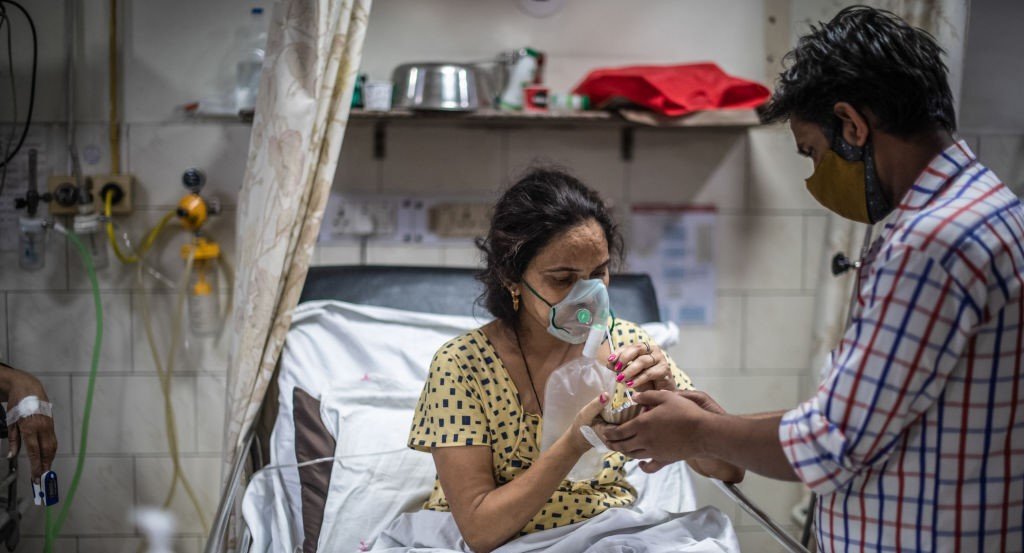 Medical staff attend to Covid-19 positive patients in the emergency ward at the Holy Family hospital on May 6 in New Delhi. False rumors floating on social media in California’s San Francisco East Bay Area suggest that large numbers of Indian Americans returning from India have been hospitalized at Fremont’s Washington Hospital after testing positive for Covid. “We are not experiencing a surge of Indian American patients showing up with Covid,” Gisela Hernandez, director of community relations at Washington Hospital, told India-West. (Rebecca Conway/Getty Images)

San Francisco East Bay residents are being flooded with false rumors over social media of 14 Indian Americans who have returned from India and have now been hospitalized with Covid-related illnesses at Washington Hospital in Fremont, California.

An Indian American resident of the East Bay Area posted on Facebook May 6 that he had received a text message from a neighbor, who cited a source at Washington Hospital. The message noted that there “are now 16 cases (of Covid positive patients at the hospital) of which 14 cases are patients of Indian descent or have been exposed to people came back from India. Currently, 3 out of 16 patients are in ICU.”

“The doctors from Washington Hospital are puzzled by the fact that the majority of these 16 patients have had either at last one dose of vaccine or fully vaccinated. Now, Alameda County health department is reconsidering mandatory mask-up and no group gathering for people who are fully vaccinated,” read the posted message.

The Alameda County Public Health Department has released no new protocols for masking, as of May 7 afternoon. The County announced March 30 that it had moved into the Orange Tier, one of the least restrictive tiers, which allows a lot of activities to resume and businesses to re-open. Alameda County Health Officer Nicholas Moss has recommended that masks be worn whenever one is outside, even if the individual is fully vaccinated.

Gisela Hernandez, director of community relations at Washington Hospital, told India-West the rumors were absolutely false. “Our numbers have been consistently low, in the single digits,” she said, noting there are currently six Covid patients at the hospital, and only one Covid patient in the Intensive Care Unit.

“We are not experiencing a surge of Indian American patients showing up with Covid,” she asserted, adding further that there has been no drastic change in the ethnic make-up of patients.

Hernandez said she has received a number of calls from people who have read the false rumors and are concerned. “Our goal is to get accurate information out there to dispel this myth.”

The hospital also stated that the B.1.617 double mutant variant identified from India is “not a known variant of concern locally.”

The double mutant B.1.617 variant identified in India, which reportedly accounts for 20 percent of new infections in that country, is far more contagious and lethal than other variants. India is experiencing a brutal second wave of the pandemic, with 400,000 reported new infections per day. Public health experts say the death toll is five times higher than reported numbers, averaging about 10,000 deaths per day. The country has run out of critical supplies, including oxygen. The U.S. has joined countries around the world in pledging aid to India, and has started shipping a $100 million package of supplies, including oxygen cylinders, concentrators, therapeutics, and personal protective equipment.

Another text making the rounds states that 35 Indian American residents of Mountain House, a residential community about 50 miles away from Fremont, were admitted to Washington Hospital after testing positive for Covid. “Some traveled from India with false Covid negative tests; they were positive in India.”

“They probably infected the entire airplane,” read the text, whose original source could not be determined.

The text further read that eight children between the ages of 6 and 7 have also tested positive for Covid in Mountain House, and have been quarantined. “It’s spreading fast among Indian adults there,” read the text, encouraging people to “stay safe.”