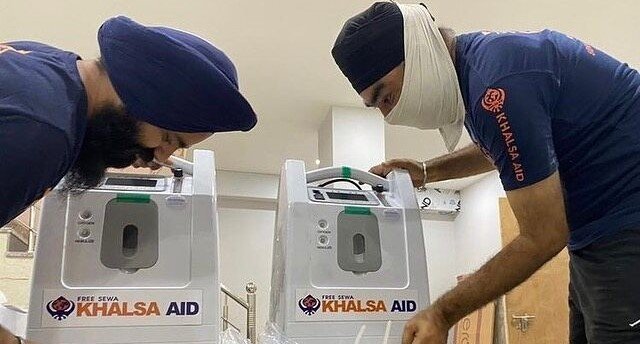 The U.S. branch of Khalsa Aid, a U.K.-based Sikh humanitarian organization, is sending another 500 concentrators and 500 electrical transformers this week to New Delhi, where the group’s team is already helping COVID-19 patients, hospitals and NGOS with essential supplies as well as wood for cremations. And Kashyap Patel, an Atlanta, Georgia-based Indian American physician who volunteers for the North America branch of the BAPS Swaminarayan Sanstha Hindu organization, which has provided 250 oxygen concentrators and several hundred thousand dollars in Covid aid, said, “It is challenging to find hospital beds.” (Khalsa Aid USA/Facebook photo)

Volunteers at Hindu temples, Muslim groups and Sikh relief organizations across the United States are mobilizing to support India as the world’s second most populous country struggles to handle a devastating surge of the coronavirus.

From coast to coast, faith groups tied to the Indian diaspora have collected hundreds of oxygen concentrators and electrical transformers to ship to overwhelmed hospitals, raised millions for everything from food to firewood for funeral pyres and gathered in prayer for spiritual support for the Asian nation.

“This is a human tragedy,” said Manzoor Ghori, executive director of the California-based Indian Muslim Relief and Charities, which has donated more than $1 million for purposes, including supporting teachers and providing families with thousands of medical kits and more than 300,000 meals.

Ghori said he has had five loved ones, including two nephews, die in India from COVID-19 — “so, it is a personal tragedy” as well.

He’s one of many in the U.S. diaspora to have lost relatives to the virus in India, where total confirmed infections and deaths have surpassed 22.6 million and 246,000, respectively, though the true numbers are believed to be much higher.

Kashyap Patel, an Atlanta, Georgia-based Indian American physician, said the pandemic has been “catastrophic” for him, with about a dozen members of his extended family in India contracting the virus, from teenagers to octogenarians, and his 73-year-old uncle dying from it.

He volunteers for the North America branch of the BAPS Swaminarayan Sanstha Hindu organization, which has provided 250 oxygen concentrators and several hundred thousand dollars in COVID-19 relief to help with India’s overwhelmed health system.

India’s Supreme Court recently said it would set up a national task force consisting of top experts and doctors to conduct an “oxygen audit” to determine whether supplies from the government were reaching states in the country of nearly 1.4 billion people amid widespread complaints of shortages.

The U.S. branch of Khalsa Aid, a U.K.-based Sikh humanitarian organization, is sending another 500 concentrators and 500 electrical transformers this week to New Delhi, where the group’s team is already helping COVID-19 patients, hospitals and NGOS with essential supplies as well as wood for cremations.

At a warehouse on New York’s Long Island, workers busily packed, sorted and labeled dozens of boxes containing transformers on a recent day ahead of their shipment.

“In these last two weeks, many of us haven’t slept. We’ve been running our day jobs at the same time,” one of the group’s Indian American Sikh directors, Manpreet Kaur said.

“It’s been an intense period of time, but for us, it’s about giving back to the community,” Kaur continued. “And the people in India definitely need that support.”

Khalsa Aid’s India relief effort has gotten grassroots support from individuals all over the country, such as Tahil Sharma, a Los Angeles-based Indian American interfaith activist born to a Hindu father and a Sikh mother. He raised nearly $3,000 on Facebook for the initiative.

“It’s a small amount for a really big crisis,” Sharma said. “But it helps mitigate the costs that Khalsa Aid needs to take upon itself sometimes in being able to get oxygen concentrators, to be able to secure beds at gurdwaras (Sikh houses of worship) on the ground in New Delhi, to help them get the resources that they need so people don’t get hit by more waves of deaths.”

Seeing individual pledges like that on social media platforms motivated members of Shri Shirdi Saibaba, a Hindu Temple in South Brunswick Township, New Jersey, to organize as a religious organization for their own effort, temple founder and chairman Rajesh Anand said. So far the temple has raised about $3,000 to buy concentrators for two hospitals in New Delhi.

“We are one among many to help the cause,” Anand said.

In the New York City borough of Queens, the Hindu Temple Society of North America has also been fundraising online and has so far donated more than $50,000 to the India Development and Relief Fund in Washington, D.C., for concentrators and other medical needs.

The temple also organized special group prayers for those who have died of COVID-19 and a virtual vigil featuring music, prayer and speeches by interfaith leaders and elected officials.

“When we learned more about the difficulties the country was facing,” said Ravi Vaidyanaat, the temple’s director of religious affairs, “we immediately thought we had to do something.”

Support for India has come, too, from the American Jewish Joint Distribution Committee, which sent ventilators to hospitals in Mumbai and Ahmedabad and personal protective equipment to rural communities. It is also recruiting U.S. and Israeli intensive-care doctors and nurses for a telemedicine training program.

“In the efforts that we’re making in India … what we keep in mind is that with each action that we engage in, we can save one life,” said Michael Geller, the group’s director of communications and media relations. “And that one life represents an entire world of people who can be impacted.”

Nepal, India’s much-smaller neighbor, is seeing its own pandemic spike, with doctors there warning recently of a major crisis as hospitals run out of beds and oxygen. That has prompted similar aid efforts by Nepalese in the United States.

“It’s a landlocked country, and there’s a lack of resources there. … The situation in Nepal is very bad,” said Urgen Sherpa, a former president and current adviser of New York City’s United Sherpa Association, which has raised about $5,000 for Nepal.