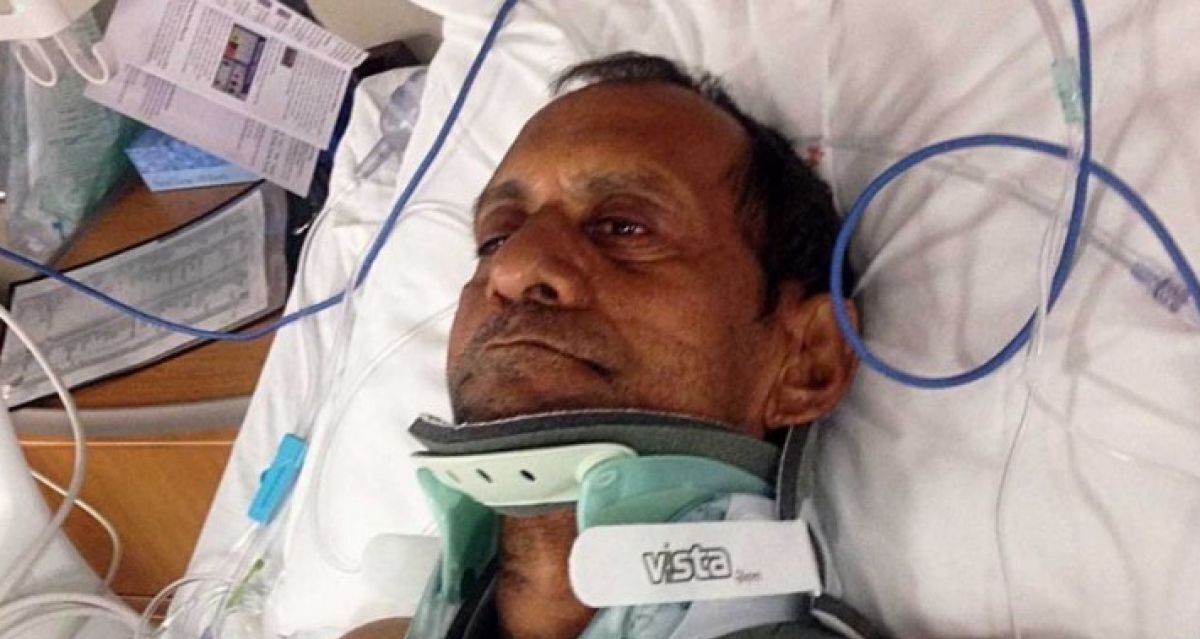 An Indian American grandfather, Sureshbhai Patel, who was severely injured by Madison, Alabama police officers while walking around his neighborhood in 2015, has received a $1.75 million settlement. Patel is seen here in a hospital after the incident. (Aakash Patel/GoFundMe photo)

Indian American senior Sureshbhai Patel, who was severely assaulted by Madison, Alabama police on Feb. 6, 2015 11 days after he arrived in the U.S. for the birth of his first grandchild, has received a $1.75 million settlement in his civil lawsuit against the city and the two police officers involved in the incident.

The lawsuit does not name the officers involved in the incident: they are identified as John Doe and Jim Smith. But extensive coverage of the case revealed that the officer trainee, Eric Parker, performed a front leg sweep on Patel, knocking him to the ground before arresting him. The two officers arrived at the scene after a neighbor called police, saying “a skinny black man” was walking around the neighborhood peering into people’s garages.

According to earlier reports, Patel attempted to tell Parker that he spoke no English. During a trial, Parker said he felt threatened by Patel, who is small and weighs an estimated 130 lbs.

Patel, 57 at the time, was paralyzed from being thrown to the ground, and spent several days in the hospital due to spinal injuries. His son Chirag Patel told India-West in 2015 that his father would likely never walk again without the use of a walker. Since he had just arrived in the U.S., the elderly man had not yet obtained health insurance and was stuck with thousands of dollars in medical bills.

Parker was accused of using excess force and, in federal charges, violating Patel’s civil rights. He was acquited of all charges in several trials. In 2016, he returned to work at the Madison Police Department after a period of administrative leave, but resigned later that year and now works for another police department in Alabama.

The lawsuit claims the two unidentified officers used excessive force and violated Patel’s civil rights. It also questions whether there was actually a call made to police. “Was the call or the false accusation against Patel fabricated by the Madison Police Department to deflect criticism for paralyzing an innocent man?” wrote Patel’s attorney Hank Sherrod.

The lawsuit further questions whether Patel was being used as a “training exercise” while Parker was being trained.

“This stop was without reasonable suspicion or probable cause and was illegal,” wrote Sherrod in the lawsuit. “The officers nevertheless came up to Patel and, despite the absence of any reason to believe Patel was armed or presented any kind of danger or threat, searched Patel for weapons.”

The civil suit was filed on Feb. 12, 2015. In May of 2020, a court ruled that the Patels had sufficient reason to bring the case to U.S. District Court for the Northern District of Alabama, Eastern Division.

According to court documents, Patel and the City of Madison appear to have settled the case out of court sometime in February. Sherrod announced the settlement on April 8.

“Not holding Parker accountable for his excessive use of force and allowing him to continue as a police officer is a fundamental failure of accountability, by both the City of Madison and our criminal justice system,” said Sherrod in a statement announcing the settlement.

“While we are glad Patel has received compensation for his injuries, no one, and especially not government actors, should be above accountability. Mr. Patel is glad to put this behind him. He appreciates all the support he has received from people all over the world. Mr. Patel credits his Hindu faith for giving him strength and peace throughout this ordeal,” said the attorney.