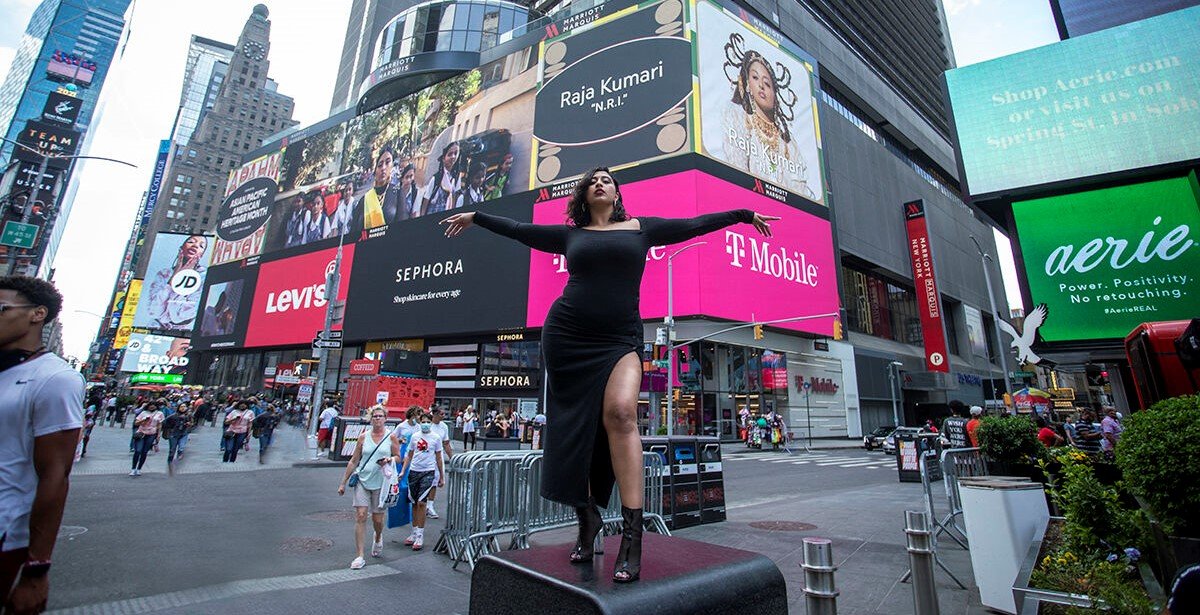 The month of May has been dedicated to celebrating the many contributions and cultures of this diverse community through narratives revolving around heritage and culture, pride and faith, sacrifice and resilience, all captured at this pivotal moment in time.

Among other communities, the entertainment community has taken note with many announcing a range of initiatives to observe the annual month-long celebration that honors the contributions of the AAPI community in America and around the world and gives a glimpse into the lived experiences and diverse cultures of the broader Asian diaspora.

Representing India on the world stage, multi-platinum rapper-singer-songwriter- dancer Raja Kumari has been roped in by Spotify, Instagram, Amazon Prime and YouTube for their respective global AAPI campaigns and will additionally feature on exclusive billboards and hoardings in prime hotspots across New York, Los Angeles and San Francisco.

The Grammy-nominated Indian American music trailblazer will be a part of Spotify’s AAPI content hub, with Kumari’s music featuring on several playlists, including Dope AF, a collection of work from leading cool Asian, femme women across the diaspora; .ORG which shares the latest Indie sounds from Asia; Desi Hits, a curated list of Desi hits from South Asia and around the world, and AAPI Pride which celebrates artistes who are queer Asian American or Pacific Islanders. Kumari has been featured on the “Proud to Be AAPI” social campaign, sharing stories about why she is proud of her heritage.

As part of the celebrations, she will feature on YouTube Music’s flagship playlist, titled “Celebrating APAHM” and YouTube Spotlight channel, which will showcase what it was like for her growing up and living in North America while “juggling multiple cultures, languages and customs” and how those experiences shaped who she became.

To sustain the conversation around her Asian American experience, she will be helming Instagram’s #RethinkOurInfluence campaign, diversifying her feed to include portrait series, reels and hero films that aspire to shift the model minority myth.

Kumari also released her new track with Sidhu’s latest album, “Moosetape,” May 23. She is featuring on the official soundtrack of a new film from Netflix India releasing next month, whose details will be revealed in time.

Recently, the performer joined in with the celebrated American actress, singer, songwriter and producer Rita Wilson in partnership with the largest branded fitness company in the world, Zumba, and dropped a brand-new track titled, “Hello World,” Mar. 8.

Additionally, to celebrate the women of today and tomorrow who live life on their own terms, she also unleashed the “TRebel” campaign with a poignant all-woman collaborative song titled, “I’m A Rebel.” The song rejoices women who want to explore, celebrate individuality and live life unrestrained. The video stars boAt endorser Kiara Advani.

In December 2020, Kumari was commissioned by Meena Harris to lend her voice for a powerful campaign orchestrated by the Indian American IMPACT Fund, Asian American Advocacy Fund and Phenomenal Productions for the Georgia Senate run-offs, focusing on the Asian American Pacific Islander community.

In February, she released “Bindis and Bangles” as an ode to the traditions of the past and the technologies of the future, all while shining a spotlight on India’s rich and unique culture. With this track, Kumari delicately drove home an apropos message of how God is omnipresent; and spiritual realization in modern times is no fallacy and can be attained without the trappings of technology. The YouTube link to this is https://www.youtube.com/watch?v=LzRpisE3wuI

Born Svetha Rao in Claremont, California, to Indian parents who emigrated to the U.S. in the ’70s, Kumari is a fearless, charismatic personality and natural-born storyteller whose mission is to create art that blends her Indian roots with her American upbringing. Her music is a sonic bridge between East and West that fuses the rhythms she absorbed as a trained classical Indian dancer with her love for hip-hop.

Apart from her career as an independent artiste, Kumari has also lent her voice as a playback singer in “Zero,” “Race 3” and had a cameo in “Gully Boy.” She is a series judge and mentor on “MTV Hustle,” India’s first rap-reality show, which debuted in August 2019, and will return for series 2, which begins filming its hunt for the next rap superstar this month. Kumari will once again reprise her role as a judge and mentor on the panel when the show airs later this year. Kumari is also the global face of MAC Cosmetics.