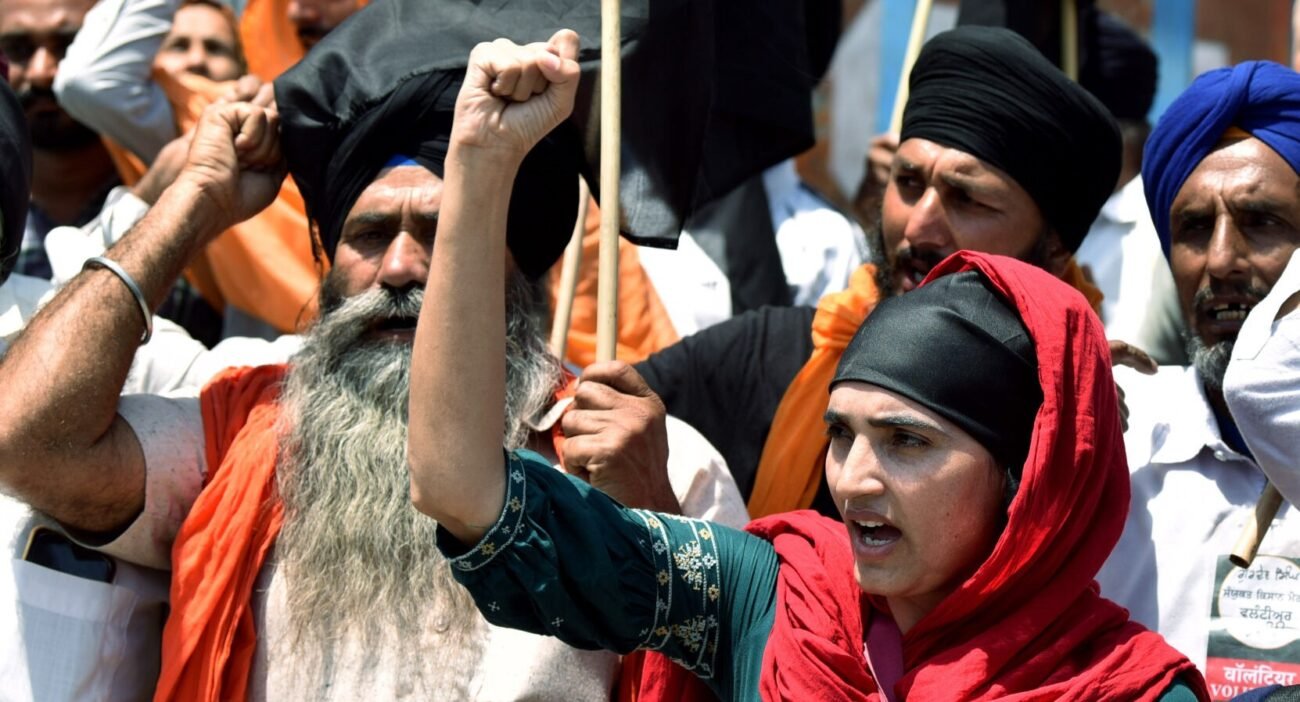 Indian farmers hold black flags as they shout slogans during a protest against farm laws and observe ‘Black Day’ at Singhu Border, in Delhi on May 26. (Rahul Singh/ANI photo)

NEW DELHI — Indian farmers demanding the government repeal new agriculture laws they say will devastate their livelihoods marked their protest movement’s sixth month May 26 by flying black banners on the cars and tractors and burning effigies of the prime minister.

Protesters have been blocking three highways connecting New Delhi to northern and western cities since November to press their demand for scrapping of the laws they say will favor large corporate farms.

The protest has continued despite a surge in coronavirus cases that has overwhelmed the country.

The black flags were flown May 26 in several cities, towns and villages around the capital. Some burned effigies of Prime Minister Narendra Modi.

“Modi your dictatorship will not last,” some farmers chanted.

The government says the laws approved by Parliament last year will inject private investment in the agriculture sector and raise the earnings of farmers by setting up warehouses in rural areas where they can store their crops and sell them when prices favor them.

The farmers say the new legislation will devastate their earnings by ending guaranteed pricing and force them to sell their crops to corporations at cheaper prices.

In January, the Supreme Court stayed the implementation of the new laws and created a committee to address the farmers’ grievances.

Agriculture Minister Narendra Singh Tomar has held several rounds of talks with protest leaders and offered to suspend the laws for a year and a half during which a solution can be reached through dialogue. The farmers are demanding an immediate repeal of the laws.

Reuters adds: Indian government leaders appealed to farmers to call off a mass protest this week for fear it could prove a viral “super-spreader” event as the country’s overall death toll from COVID-19 crossed 300,000 May 24.

Over a third have died over the past three weeks during a devastating second wave fueled by a new virus variant detected in India, mass political and religious gatherings, and lowering of the guard by the public, health officials and experts say, the Reuters report said.

Farmers are camped out on Delhi’s outskirts despite a great risk of infection to themselves, the joint committee of farmers organizations said in a letter to Prime Minister Narendra Modi, urging him to repeal laws to liberalize the farm sector, the report said.

The fear is that a mass rally on the edges of the capital Delhi could become a “super-spreader” incident like the Great Pitcher festival on the banks of the river Ganges last month when thousands took a holy dip, or the crowded political rallies that were held in states holding local elections, it said.

“Please don’t act irresponsibly, this kind of protest is totally unacceptable when the lives of people are at stake,” Amarinder Singh, chief minister of the Punjab state where the farmer demonstrations originated, said in a statement.