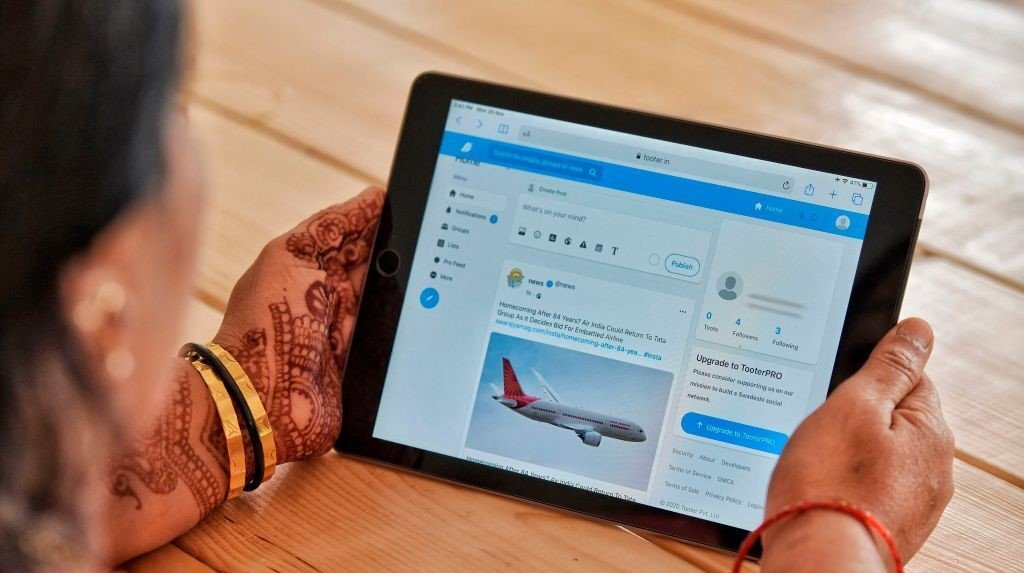 A woman browses through the home page of ‘Tooter,’ a social network modeled after the popular ‘Twitter.’ (Manjunath Kiran/AFP via Getty Images)

NEW DELHI — Twitter May 27 said it is worried about the safety of its staff in India and called for the government to respect freedom of expression, days after Indian police visited its office in New Delhi over its labeling of a tweet by a governing party spokesman as “manipulated media.”

Twitter has been involved in a tense battle with the Indian government, which has often asked it to restrict content alleging Prime Minister Narendra Modi’s administration is trying to silence criticism, including of its handling of the coronavirus pandemic.

Twitter said it has “concerns with regards to the use of intimidation tactics by the police” and “the potential threat to freedom of expression for the people we serve.”

India’s IT ministry called Twitter’s statement “totally baseless, false and an attempt to defame India.” It said Twitter should “comply with the laws of the land” instead of “dictating what India’s legal policy framework should be.”

The ministry also said representatives of social media companies including Twitter “are and will always remain safe in India.”

On May 24, Indian police visited the Twitter office in New Delhi to serve a notice directing it to answer questions about its tagging of the tweet as manipulated.

“It appears that Twitter has some information which is not known to us on the basis of which they have classified it as such,” police said in a statement.

On May 26, the messaging app WhatsApp filed a lawsuit in Delhi High Court arguing that new government rules that require it to make messages “traceable” to external parties are unconstitutional and undermine the fundamental right to privacy.

WhatsApp currently uses end-to-end encryption for its messaging service, which encrypts messages in such a way that no one apart from the sender and receiver are able to read the messages sent between them.

Sweeping new regulations for technology companies were announced in February that hold them more accountable for content shared on their platforms. A 90-day grace period for complying with the rules ended May 26.

Leaders from Modi’s party last week tweeted portions of a document they said was created by the main opposition Congress party to make the government look bad over its handling of the pandemic. Some Congress leaders complained to Twitter, saying the document was forged. In response, Twitter marked some posts as “manipulated media.”

Under Twitter rules, it applies “manipulated media” tags to posts that have been “deceptively altered or fabricated.”

Twitter said in its statement Thursday that “to keep our service available, we will strive to comply with applicable law in India.”

“But, just as we do around the world, we will continue to be strictly guided by principles of transparency, a commitment to empowering every voice on the service, and protecting freedom of expression and privacy under the rule of law,” it said.

The new social media regulations give the government more power to police online content. They require internet platforms such as Facebook and Twitter to erase content that authorities deem to be unlawful and to help with police investigations, including identifying the originators of “mischievous information.”