HomeIndiaIndia and the worldGoFundMe Launched for Indian American Mother Stranded in India Due to Travel Ban, Husband Dies in U.S. 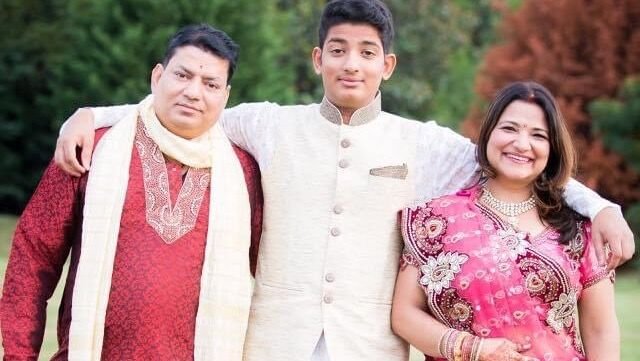 Edison, New Jersey, resident Kiran Shukla is seen here with her 19-year-old son, Samyak Shukla, and her husband Jitendra Shukla, who passed away May 11 from liver failure. Kiran, who is currently stuck in India because of the indefinite travel ban, could not even attend her husband’s funeral. (GoFundMe photo)

Edison, New Jersey, resident Kiran Shukla is among thousands of work visa holders and their dependents who travelled to India to take care of an ailing parent but were unable to return home because of the Covid-related travel ban imposed by the Biden administration May 4. But while she was in India, she lost her father, who was nearing the end of a long fight with brain cancer, and everyone in her family tested positive for Covid, and, unfortunately, her young brother-in-law succumbed to the disease. Thousands of miles away, here in the U.S., her husband passed away at JFK Hospital May 10 due to liver failure.

Kiran Shukla struggled to get back to the U.S. for the funeral but could not because she needs her visa to be stamped and all the consulates in India have been shut down in response to the surge in coronavirus cases.

Shukla watched a YouTube livestream from 7,300 miles away as her American-born 19-year-old son, Samyak Shukla, participated in funeral and cremation rites for her 50-year-old husband, Jitendra Shukla, according to the Daily Beast.

Back onn April 5 when Samyak and his father drove Kiran to Newark Airport, she had not imagined that she was seeing her husband for the very last time, reported the publication.

“She had no clue,” Samyak recalled to the Daily Beast. “Other than saying goodbye through hugs, there was nothing else that was said.”

Friends back in the U.S. are trying to raise funds to support the family.

“We were trying to get Kiran here, due to travel ban and her immigration status things are not easy for her,” read the page. “There were three death(s) in a family within a month…Can’t believe what the whole family is going through right now. Please help in whatever way possible and any contribution will help this family in such terrible situation.”

Donations can be made on this page: https://gofund.me/15d82d3a