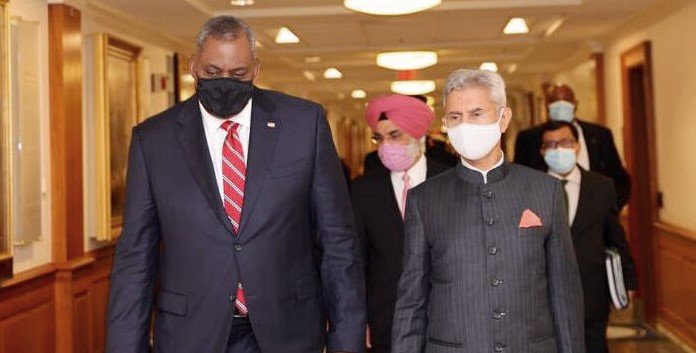 Indian External Affairs Minister Dr. S Jaishankar meeting with U.S. Secretary of Defense Lloyd J. Austin May 28. The minister also held a meeting with members of the USIBC Board and some Indian American executives from the ‘Global Task Force for Pandemic Response,’ who shared their ongoing initiatives to support India’s health infrastructure and relief efforts. (ANI photo)

On May 27, Jaishankar had met with US National Security Adviser Jake Sullivan wherein they held an hour-long meeting discussing wide-ranging issues including the Indo-Pacific and Afghanistan in Washington.

“Pleased to meet NSA @JakeSullivan46. Wide-ranging discussions including on Indo-Pacific and Afghanistan. Conveyed appreciation for US solidarity in addressing the Covid challenge. India-U.S. vaccine partnership can make a real difference,” Jaishankar tweeted.

“I met today with India’s Minister Jaishankar. Our people-to-people ties and our values are the foundation of the U.S.-India partnership and will help us end the pandemic, lead on climate, and support a free and open Indo-Pacific,” Sullivan tweeted.

Horne said further that both the leaders welcomed cooperation in recent weeks that resulted in deliveries of over $500 million in COVID-19 relief supplies from the U.S. federal and state governments, U.S. companies and from private citizens across America for the people of India.

“They discussed a range of regional and global issues, and agreed the United States and India should continue working closely together to address common challenges throughout the Indo-Pacific region,” the statement said.

“They agreed that people-to-people ties and shared values are the foundation of the U.S.-India strategic partnership that is helping to end the pandemic, supporting a free and open Indo-Pacific, and providing global leadership on climate change,” the statement added.

During that meeting, Jaishankar was accompanied by India’s Ambassador to the U.S. Taranjit Singh Sandhu as the external affairs minister commenced the second leg of his U.S. visit.

Jaishankar and Tai discussed the issues around the proposal by India to suspend the Trade-Related Aspects of Intellectual Property Rights Agreement to help them produce vaccines to fight COVID-19.

“Our trade, technology and business cooperation are at the core of our strategic partnership. Enhancing them is vital to post-Covid economic recovery. Welcomed her positive stance on IPR issues and support for efficient & robust supply chains,” the minister said.

Jaishankar and members of U.S.-India Business Council board and select executives from the ‘Global Task Force for Pandemic Response’ shared their ongoing initiatives to support India’s health infrastructure.

“Jaishankar’s meeting with USIBC reinforced both countries’ commitment to fight the pandemic together, build resilient supply chains and advance vaccine access. Joined by members of the USIBC Board and select Indian American executives from ‘Global Task Force for Pandemic Response,’ companies shared their ongoing initiatives to support India’s health infrastructure and further ways to continue relief efforts,” USIBC said in a statement on the business leaders meeting.

According to the statement, so far, the Global Task Force, a consortium of over 40 American companies, has supported India as follows:

In recent weeks, both groups, the US-India Strategic Partnership Forum and the USIBC, have formed a “Global Task Force on Pandemic Response” along with the U.S. Chamber of Commerce to work on several aspects of pandemic relief.

Jaishankar arrived in the U.S. on May 24 and is slated to visit many senior officials, including Secretary of State Antony Blinken, during his stay which runs through May 28.