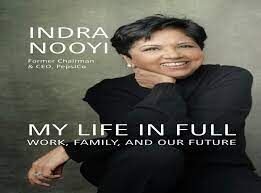 Leibovitz’s shot of a stylish but relatively casual Nooyi, wearing a dark sweater and pants, will appear on the cover of Nooyi’s memoir “My Life in Full,” scheduled to come out Sept. 28.

The Indian American businesswoman is expected to write about her childhood in India, her experiences as an immigrant at Yale University’s business school and how she became the rare woman and person of color to reach the highest levels of corporate power.

“It is not so much that Indra is a CEO but it is who she is,” Leibovitz said in a statement June 2. “I have always been interested in what someone does. Indra has paved the way for so many women in business. As a mother, I would like my three daughters to read her memoir.”