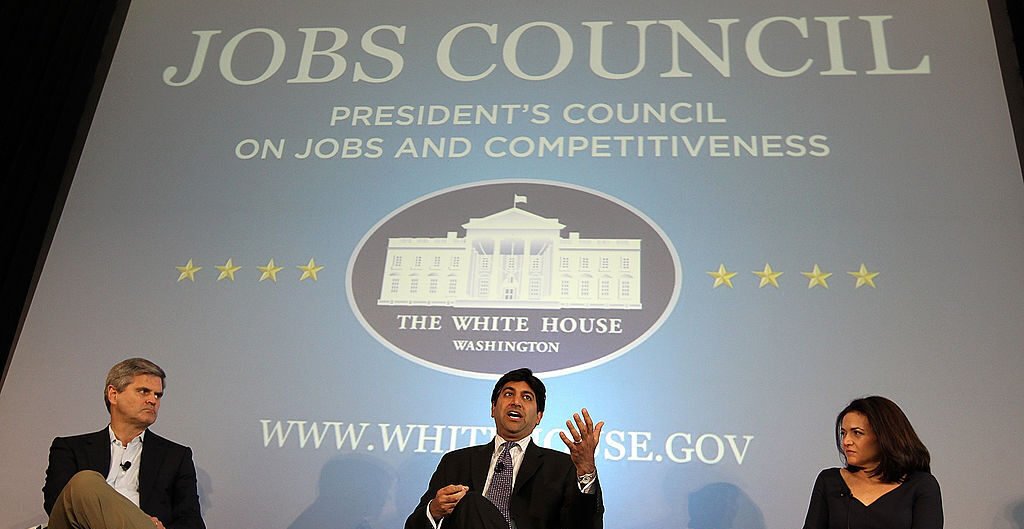 The Biden administration has re-launched the International Entrepreneurs Program, also known as a start-up visa. The program is different from the E-2 visa, for which Indians and Chinese do not qualify. Above: File photo of Revolution LLC CEO Steve Case (left), and Facebook COO Sheryl Sandberg (right) looking on as Indian American Aneesh Chopra, then Chief Technology Officer of the U.S., speaks during the President’s Council on Jobs and Competitiveness High Growth Business and Entrepreneurship Aug. 2, 2011 in Palo Alto, California, where entrepreneurs could learn how public and private sectors can partner to create jobs through innovation. (Justin Sullivan/Getty Images)

The Biden Administration has revived the International Entrepreneur Rule which creates a pathway for foreign entrepreneurs to live in the U.S., with their families, and grow a start-up company.

The International Entrepreneur Rule is different from an E-2 investor visa: Indian and Chinese entrepreneurs are not eligible for an E-2 visa, which is limited to citizens of countries with which the U.S. has a qualifying “treaty of commerce and navigation.” Approximately 80 countries throughout the world have such qualifying treaties, but India and China do not.

The program is often mischaracterized as a start-up visa program, but the organization Boundless Immigration explains that only Congress can create a whole new visa category. The rule is based on the Secretary of Homeland Security’s discretionary authority to grant “parole” in special circumstances. In the immigration context, “parole” means temporary permission to be in the United States.

Forbes Magazine notes that 3.2 million foreign-born entrepreneurs operate businesses in the U.S., representing nearly 22 percent of all business owners versus just 14 percent of the broader population. They hold disproportionate numbers of patents for new technologies, employ 8 million people and are represented as founders at more than half of all venture-backed “unicorns,” companies valued at over $1 billion.

Despite several Congressional efforts, the U.S. does not have a start-up visa to support foreign entrepreneurs.

The International Entrepreneur program was an initiative of the Obama Administration, and began as President Barack Obama ended his tenure in the White House. The Trump Administration attempted to end the program, but a federal court allowed the program to continue.

The legal Web site JD Supra reported that only 30 applications were received between 2017 and 2019, and that only one application for international entrepreneur parole was actually approved during that time period.

The Department of Homeland Security announced the re-launch of the International Entrepreneur program May 10, noting: “It will remain a viable program for foreign entrepreneurs to create and develop start-up entities with high growth potential in the United States. The program will help to strengthen and grow our nation’s economy through increased capital spending, innovation, and job creation.”

“Immigrants in the United States have a long history of entrepreneurship, hard work, and creativity, and their contributions to this nation are incredibly valuable,” said Acting USCIS Director Tracy Renaud in a press statement. “The International Entrepreneur parole program goes hand-in-hand with our nation’s spirit of welcoming entrepreneurship and USCIS encourages those who are eligible to take advantage of the program.”

In an article written by Caleb Watney, Lindsay Milliken and Doug Rand — co-founder of Boundless Immigration — for the Innovation Frontier Project, the writers used DHS estimates to predict that 2,940 entrepreneurs would avail of the program each year, creating an average of 100,000 to 300,000 new jobs over 10 years.

To qualify for a visa under the program, foreign entrepreneurs must prove that they will provide a “significant public benefit because he or she is the entrepreneur of a new start-up entity in the United States that has significant potential for rapid growth and job creation,” according to the rule, which can be read in its entirety here: https://bit.ly/3gCiYLP.

Boundless Immigration explains that the foreign entrepreneur must have a significant ownership stake in the start-up of at least 10 percent, and have an active and central role in its operations.

The start-up must have been formed in the United States within the past five years and demonstrated potential for rapid business growth and job creation. This can be demonstrated by attracting at least $250,000 from qualified U.S. investors, or $100,000 in awards or grants from federal, state or local agencies.

Admission into a highly competitive start-up accelerator can also be used as a qualifier.

However, the visa does not offer a pathway to a green card or permanent residency.