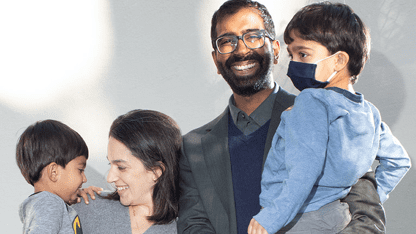 Indian American civil rights lawyer Shekar Krishnan is among nine candidates running in the primary. He is seen above with his family. (voteshekar.com photo)

A couple of Indian Americans are vying to win the June 22 Democratic primary for the New York City Council District 25 seat in Queens, a post that has been vacated by term-limited Councilman Daniel Dromm.

According to a City & State New York report, whoever is elected in the primary is also all but certain to take office in January, because of the district’s heavy Democrat leanings.

Dromm has endorsed Indian American civil rights lawyer Shekar Krishnan, who is among the nine candidates running in the primary, the report said.

The district is also known for having many first- and second-generation immigrants, including large Indian, Nepali, Bangladeshi, Ecuadorian, and Colombian, populations, the report said.

Two other candidates, Rajesh Ranot and William Salgado, are also listed as Democrats running in the race, but little information about them could be found online, it said.

According to Campaign Finance Summary 2021 Citywide Elections, Ranot has $200 in private funds while Salgado has $10,766, the report said.

Of the candidates, Krishnan and Chen have raised the most private funds with $81,734 and $133,485, respectively, as of June 16, according to the Campaign Finance Summary 2021 Citywide Elections, the report said.

Leading in the number of endorsements is Krishnan who has been endorsed by a number of different officials and organizations including Congressional Rep. Nydia Velazquez, State Sens. Julia Salazar and John Liu, the Black Lives Caucus, Make the Road Action, and the United Federation of Teachers, among others.

Community member Alpana Choudhury, founder and executive director of private practice Wove Therapy, said the opportunity to get a fresh person representing Jackson Heights and Elmhurst gives the community an important opportunity to rethink how things have been done previously in the district, the City & State New York report said.

Candidates touched on the pandemic’s disproportionate impact on their community during interviews, pointing to platforms crafted to address inequities and boost funding for vital government services like healthcare, according to the report.

“COVID didn’t create these issues for our neighborhoods, it exacerbated them for everyone to see,” said Krishnan, who is the son of South Indian immigrants, the report said. “I think that the fact that Jackson Heights and Elmhurst were the epicenter of this pandemic wasn’t any accident. It was the result of decades of disinvestment in our neighborhoods.”

Krishnan points to his experience as a civil rights lawyer fighting for housing justice as the reason he decided to run for office, saying Jackson Heights and Elmhurst have experienced years of systemic inequities where the community has not gotten the resources and services it needs from the government.

To address this, he said, the city needs to truly invest in services — not temporary fixes or patches. On the healthcare front, Krishnan is in favor of significantly expanding city funding for Elmhurst Hospital as well as instituting a citywide moratorium on hospital closures and increasing language accessible services within health care, the report adds.

With regard to the hot-button issue of affordable housing, Krishnan said, “Where your home is affects everything else — the resources that we need but don’t receive for our public hospitals, for our public schools, for our mental health services.”