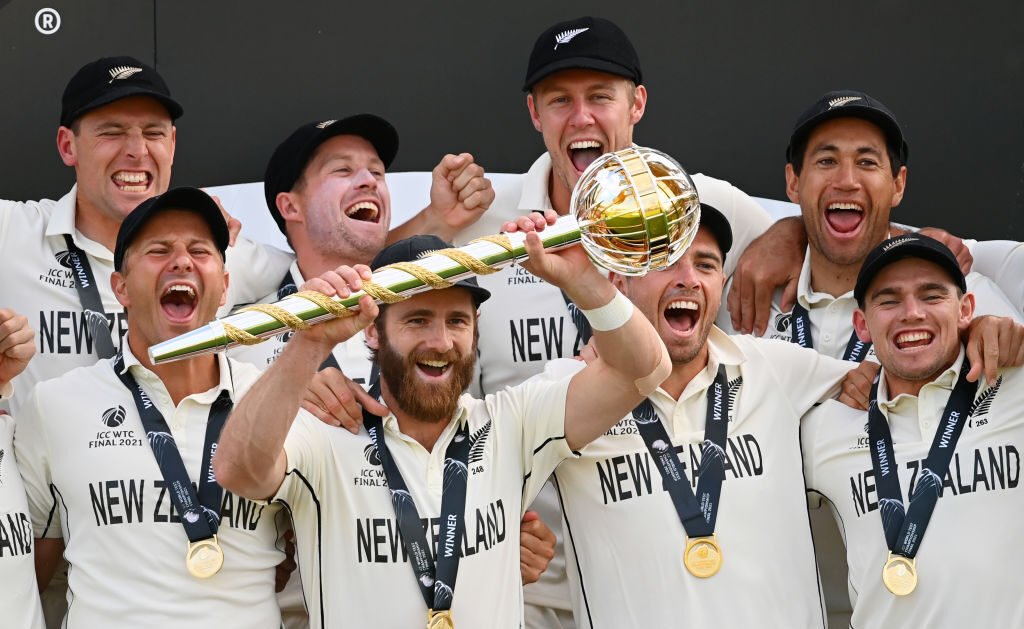 SOUTHAMPTON, England — New Zealand won a brilliant final of the inaugural world test championship by beating India by eight wickets on the sixth day June 23 at the Rose Bowl.

Captain Kane Williamson and Ross Taylor, befitting two of New Zealand’s greatest batsmen, combined from 44-2 after the loss of the openers to reach the target of 139 with seven overs remaining.

Taylor hit the winning runs flicking a Mohammed Shami ball over midwicket. He was 47 not out and Williamson was 52 not out.

But, typical of a final which was gripping despite being disrupted by two washed out days and bad light, the finish was tense.

India’s bowlers created chances and never gave up. Williamson was given out on 1 and overturned the decision on review, and he was dropped on 45. Taylor was dropped on 26, and hit flush on the front of his helmet on 30 but soldiered on.

They absorbed all of India’s pressure in a stand of 96 to finish off for New Zealand a first International Cricket Council tournament victory in 21 years.

The Black Caps prevailed thanks to a deeper pace attack and batting lineup, but it was close.

India chose its two great spinners three days before the final and backed themselves even as the weather worsened as forecast in Southampton. New Zealand waited to name its team at the toss, delayed for a day by a first-day washout, and backed its strength by going for an all-pace attack tuned up from a series win over England, another major milestone for the Kiwis.

The relentless barrage of balls swinging and seaming in ideal conditions, overcast and moist, wore down the frustrated Indians, who spent more than three weeks in quarantine and didn’t have a warmup game.

The probing line of Jamieson outside off stump troubled overnight batsmen Virat Kohli and Cheteshwar Pujara. Captain Kohli was set up by the 2.04-meter (6-foot-8) Jamieson for a second straight time with a faint edge behind on 13, and Pujara was caught well by Taylor at first slip on 15.

Ajinkya Rahane and Rishabh Pant pushed the lead to 77 until Rahane tried recklessly to flick Boult but was caught behind by BJ Watling down the leg side on 15. Watling later broke a finger but carried on as wicketkeeper on the last day of his 75th and final test.

Wagner tested Ravindra Jadeja with short-pitched deliveries on the leg side before pitching one on a good length to get the edge of the left-hander for 16.

Pant was dropped on 5 by Southee in the slips when India was 82-4 and leading by just 50 runs. New Zealand looked to rue the miss, but after scoring a team-high 41 from 88 balls, Pant couldn’t contain himself any longer and tried to break the shackles by charging at Boult and seeing Henry Nicholls hanging on to a brilliant two-handed diving catch at point.

One ball later, Ashwin edged Boult to the slips, then Southee wrapped up the innings with two quick wickets.

The winning target for New Zealand looked within reach but also distant.

Ashwin dug out the openers and appeared to nab the prized wicket of Williamson on 1. But Williamson got the decision overturned when video showed the ball missing leg stump.

Williamson and Taylor patiently took ones and twos and smacked the odd bad ball. Taylor was dropped on 26 by Pujara at first slip off Bumrah, and Williamson was given a let off on 45 when he was dropped by Bumrah in the outfield.

They made India pay dearly.