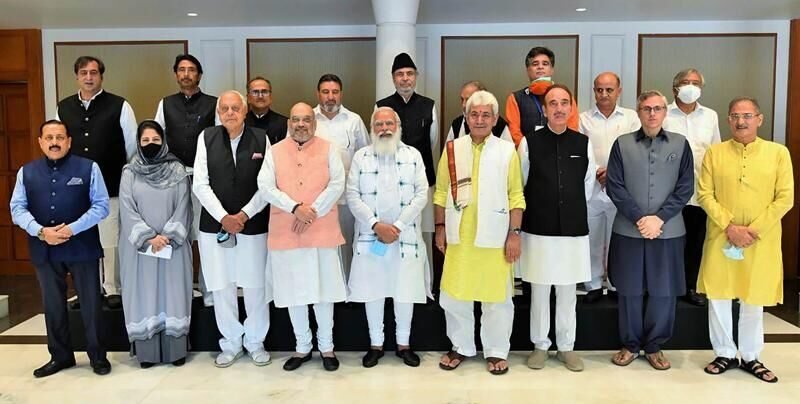 This photograph provided by the Prime Minister’s Office shows members of various political parties with Indian Prime Minister Narendra Modi, center, and Home Minister Amit Shah, center left, in New Delhi, India, Thursday, June 24, 2021. India’s prime minister is holding a crucial meeting with pro-India politicians from disputed Kashmir on Thursday for the first time since New Delhi stripped the region’s semi-autonomy and jailed many of them in a crackdown. (Prime Minister’s Office)

SRINAGAR — India’s prime minister held a crucial meeting with pro-India politicians from disputed Kashmir on Thursday for the first time since New Delhi stripped the region’s semi-autonomy and jailed many of them in a crackdown.

No major decision was announced after the meeting and many Kashmiri leaders said they reiterated their demand that New Delhi should reverse its 2019 changes.

Experts say the meeting was meant to ward off mounting criticism at home and abroad after Prime Minister Narendra Modi’s Hindu nationalist government in August 2019 downgraded the region’s status, split it into two federal territories — Ladakh and Jammu-Kashmir — and removed inherited protections on land and jobs for the local population.

Since then, Indian authorities have imposed a slew of administrative changes through new laws, often drafted by bureaucrats, that triggered resentment and anger as many likened the moves to the beginning of settler colonialism. Modi has called the changes overdue and necessary to foster economic development and fully integrate Kashmir with India.

Among those invited were Kashmir’s former three top elected officials: Farooq Abdullah, his son Omar Abdullah, and Mehbooba Mufti, who was a regional coalition partner of Modi’s Bharatiya Janata Party for nearly two years after the 2016 state elections.

Despite being pro-India and seen by many in Kashmir as New Delhi’s collaborators, Shah last year labeled them a “gang” while some others called them “anti-national elements.” Some senior ruling party leaders also dubbed them political untouchables who were rendered redundant by the 2019 decision.

The three and a few other invited leaders were among thousands arrested and held for months in 2019. They have criticized India’s policies in Kashmir and formed an alliance with four other parties to fight them, calling them “spitefully shortsighted and unconstitutional.”

Shah said the government “stressed to strengthen the democratic process” in the region.

But the alliance spokesman, Yousuf Tarigami, told reporters after the meeting that they did not get any concrete assurances from Modi and Shah, although they “heard our concerns, demands and aspirations.”

The Kashmiri alliance stuck to their demands and said they told Modi during the meeting that the region’s semi-autonomous powers should be restored.

“India’s unconstitutional, illegal and immoral changes in the region are not acceptable to us,” Mufti, the region’s former chief minister, told reporters after the meeting.

Mufti said she told the Indian leaders that New Delhi should also talk to neighboring Pakistan and find a solution to the dispute.

Several other leaders, however, steered away from demanding a restoration of the special status and said they instead stressed an early restoration of statehood, the holding of an election and land and employment security for people.

The meeting follows the reaffirmation of a 2003 cease-fire accord between India and Pakistan in February as part of a peace deal brokered by the United Arab Emirates.

Sushant Singh, a senior fellow at the Center for Policy Research, a public policy think tank in India, said geopolitical reasons forced “Modi’s hand for an outreach towards Kashmiri political leaders.” In a tweet, he said Tuesday that the UAE-brokered backchannel talks led to “certain commitments from the Modi government on Kashmir.”

International pressure, particularly from U.S. President Joe Biden’s administration, has also been piling on the Indian government to reverse some of its recent changes.

Dean Thompson, acting assistant secretary of state for South and Central Asia, told a congressional hearing early this month that although New Delhi had taken some steps such as the release of prisoners and the restoration of 4G internet access in the region, “there are other electoral steps we’d like to see them take and that we have encouraged them to do and will continue to do so.”