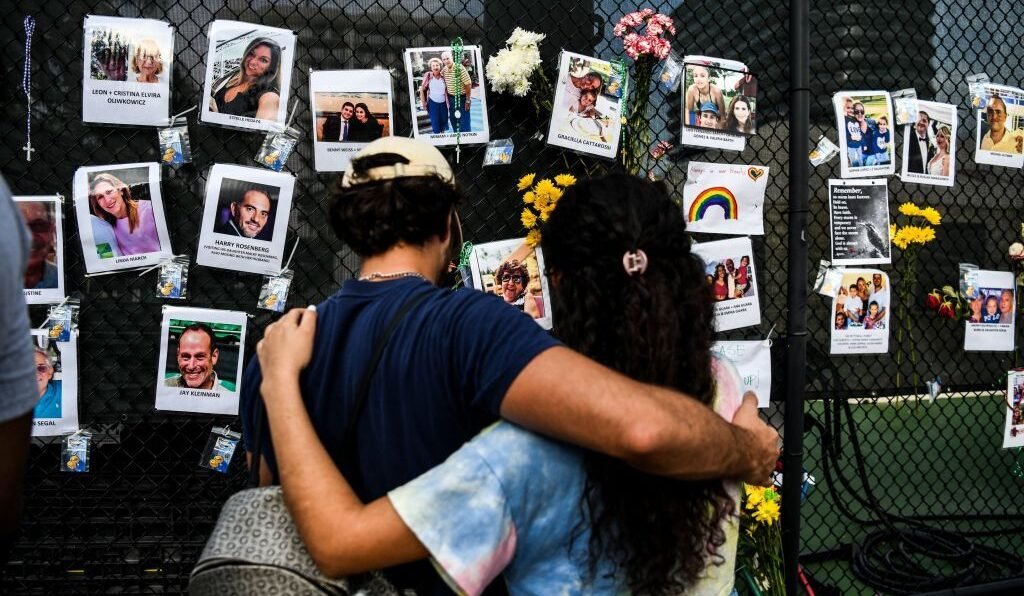 People visit the makeshift memorial for the victims of the building collapse, near the site of the accident in Surfside, Florida, north of Miami Beach on June 27, 2021. More than 150 people are still missing and their weary families have been waiting more than three days for information as to their fate. (Chandan Khanna/AFP via Getty Images)

Authorities have identified eight of the nine people confirmed to have died after the collapse of a 12-story beachfront condominium in Surfside, Florida, according to an AP report. About 150 others remained missing June 27 as rescuers painstakingly searched through the rubble of the Champlain Towers South, including an Indian American family.

Those missing include Vishal Patel, his wife Bhavna, and their 1-year-old daughter Aishani. Bhavna Patel is four months pregnant.

Vishal Patel’s niece Sarina Patel, of Southern California, told KABC-TV that she talked to her uncle on Father’s Day, telling him that she had bought a ticket to go see the couple and meet their child. Since the building’s collapse, her family has tried texting and calling, but hasn’t heard back, she said.

“We’re starting to prepare for the negative possibility, especially as the hours pass, but at the end of the day our family is very hopeful,” she said. “I just keep praying they have found a pocket somewhere where they were able to seek shelter and just waiting to be found.”

Sarina Patel said her aunt and uncle moved into the building two years ago. Growing up, her uncle lived with her family in Chino Hills.

Her family is desperate for answers, she said.

“If they said they wanted volunteers, I would be on a plane and I would go start helping. Anything to make it go faster,” she told KABC. “Miracles do happen,” she said.

According to a report on abc7.com, as rescuers continue to use heavy machinery and power tools to clear the rubble and tunnel in at the complex, Sarina Patel said they have tried calling the missing family’s cell phone, and tried texting them, “but as time passed it became scarier,” she said. “You just kind of start to understand like they’re somewhere in that rubble,” she said in the report.

According to a bbc.com report, Umma Kannayan, who is a family friend of the Patels, told the BBC’s Will Grant that they were a “very loving” family who were closely involved in their religious community.

“Aishani was like the little baby of the temple,” she said. “It feels like you’ve lost a part of yourself.”

The ground-floor pool deck of the oceanfront condominium building that collapsed was resting on a concrete slab that had “major structural damage” and needed to be extensively repaired, according to a 2018 engineering report that also uncovered “abundant cracking and spalling” of concrete columns, beams and walls in the parking garage.

While the engineering report from the firm of Morabito Consultants did not warn of imminent danger from the damage — and it is unclear if any of the damage observed was responsible for the collapse — it did note the need for extensive and costly repairs to fix the systemic issues with Champlain Towers South.