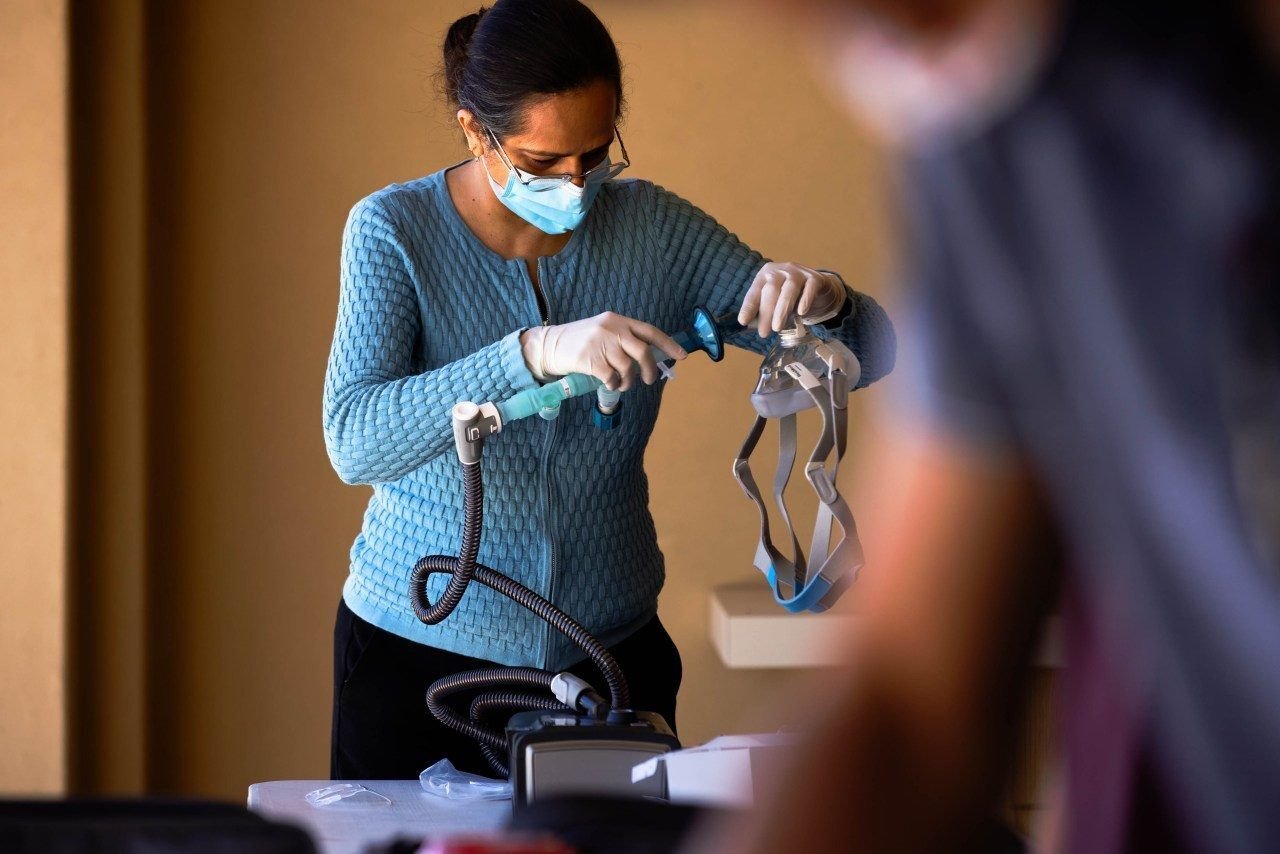 Morgan Hill, Calif.-based Indian American physician Kusum Atraya, who specializes in sleep apnea disorders, collected CPAP machines, which, with a little bit of tweaking, can be used as non-invasive ventilators for people with COVID-19. Two shipments of these devices have already been sent to India, with a third round being planned. (photo provided)

As the COVID-19 pandemic continues to rage in India, a group of San Francisco Bay Area, Calif.-based Indian Americans are helping in the fight against the deadly disease.

In April, when the COVID-19 cases in India started to climb, Morgan Hill-based Dr. Kusum Atraya, who specializes in sleep apnea disorders, could not sit by and watch the catastrophe unfold. Based on information that scientists at Stanford and UC Berkeley converted sleep apnea devices into non-invasive ventilators to help patients breathe before they get to a critical stage, she got to work, according to a press release. She learnt that the procedure was easy and it cost only $50 to adjust the machines to provide a safe alternative to ventilators which can be free to use for serious patients. She wanted to send these NIV devices to the rural parts of India and then eventually to Nepal and Pakistan.

A Stanford doctor invented an accessory with an oxygen port, making the CPAC machines an oxygen delivery device as well, according to KPIX5.

“I knew most of my patients had those CPAP machines that they are not using,” Atreya told KPIX5. “So, I called my patients, collected some and slowly, in the community, we collected 20,000 of those.”

“She was so obsessed, could not sleep for days just thinking about the logistics,” Rajvinder Dhillon, who is among the volunteers helping Atraya, told India-West. “She even thought about going to airport and begging people to take it with them. She needed a nonprofit to raise funds and volunteers to convert the machines. San Jose Gurdwara management Bob Dhillon, Simirit Kamboe and Kirpal Singh Atwal agreed. The oxygen was prepared in Atraya’s garage for people in India, just like Gurdwara Rakab Ganj Sahib in Delhi India.”

Atraya was joined in her mission by many, including Vijay Devadhar, who brought in the volunteers to assemble the machines.

Dhillon added that he contacted his friends, friend’s friends and family based across the U.S.

“…I was apprehensive but the first person I called said, ‘I would be happy to donate.’ 90 percent conglomerate of people, Sikhs, Hindus, and their American Christian spouses, even a Japanese, came through. That was a heartwarming experience,” said Dhillon.

Once the devices were ready, Joseph Talamo, the owner of Talamo Foods of Morgan Hill, gave them free boxes, and with financial help from Google the machines were shipped off to India. Two shipments, he said, have already been sent.

“In the third round, if you get a call or email from me, please donate, it does not matter how much, there is a saying, ‘Little droplets of rain fill the river.’ If it comes from your heart, it will bear the fruit,” added Dhillon.