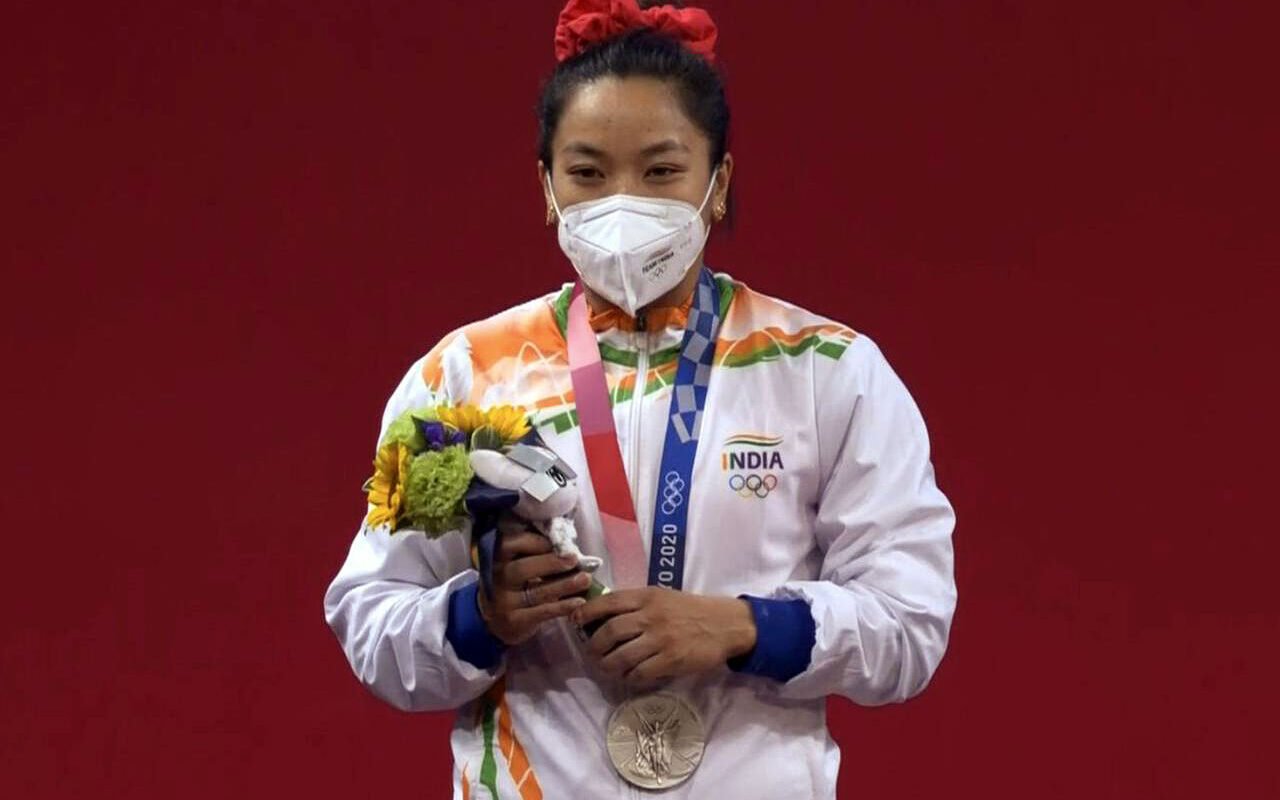 Weightlifter Mirabai Chanu on the podium after receiving the silver medal in Women’s 49kg category at theTokyo Olympics 2020, in Tokyo on July 24. (ANI photo)

TOKYO (IANS) – Indian weightlifter Mirabai Chanu provided the silver lining on a day when some of the most talented Indian shooters, including pistol marksman Saurabh Chaudhary and rifle ace Elavenil Valarivan, failed to make the mark on the first full day of competitions at the Tokyo Olympics here.

Manipur’s 26-year-old Mirabai exorcised the ghost of the 2016 Rio Olympics with a total lift of 202kg — 87kg in snatch and 115kg in clean and jerk — to clinch India’s second medal in weightlifting (earlier, Karnam Malleswari had taken the bronze in the 69kg category at the 2000 Sydney Olympics).

With the silver at the Tokyo Olympics July 24, Mirabai has now won medals in the Commonwealth Games, Asian Championships, and World Championships.

On a day when 19-year-old ace 10m air pistol shooter Chaudhary qualified for the finals at No. 1 spot, raising hopes of a gold medal, he lost touch in the finals to finish seventh, while compatriot Abhishek Verma couldn’t make the eight-shooter final, ending 17th.

The Indian men’s hockey team, after a sedate beginning in Pool A, when they conceded a goal, rallied against New Zealand to win 3-2 and prime themselves up for the upcoming clashes, especially against the world No. 1 side Australia on Sunday. The women’s hockey team, however, left the fans disappointed after matching World No 1 the Netherlands for the entire first half before slumping to 1-5 defeat in their opening Pool A match.

Indian tennis ace Sumit Nagal, who was a last-minute entry to the Olympics after slots were created due to pull-outs by top players, defeated 2018 Jakarta Asian Games champion, Denis Istomin of Uzbekistan, 6-4, 6-7(6), 6-4 to advance, while table tennis player Manika Batra – after losing the round-of-16 mixed doubles match partnering Achanta Sharath Kamal to Chinese Taipei’s Lin Yu-Ju and Cheng I-Cheng 11-8, 11-6, 11-5, 11-4 – came back strongly to beat Ukraine’s 20th seed Margaryta Pesotska. She is now the first Indian woman paddler to win a round at the Olympics since 1992.

Indian shuttlers had a mixed day with the men’s doubles pair of Chirag Shetty and Satwiksairaj Rankireddy defeating the higher-ranked Chinese Taipei pair of Lee Yang and Wang Chi-lin 21-16, 16-21, 27-25 in their first Group A match, while the country’s hope in men’s singles, B Sai Praneeth, suffered a shock loss against Misha Zilberman of Israel in his first Group D match.

There was disappointment for 2010 Asian Games gold-medallist boxer Vikas Krishan who was eliminated in the first round by Japanese upstart Sewonrets Quincy Mensah Okazawa in the 69kg category.

The lone Indian judoka at the Games, Shushila Devi Likmabam, bowed out in the opening round, pinned by Hungarian stalwart Eva Csernoviczki in the round of 32, while rowers, Arjun Lal Jat and Arvind Singh, too had a forgettable outing as the pair finished fifth in the lightweight men’s double sculls heats July 24.

The rowers will now head into the repechage round on July 25 and hope for luck to favor them.

Mirabai Chanu opened India’s medals tally on Saturday as she bagged a silver in the women’s 49kg category. “My dream of winning the medal has been achieved. I learned after my defeat in the Rio Olympics, changed my technique, and worked hard,” said Chanu in a virtual press conference organized by the Sports Authority of India.

“My win will change things for sure as in weightlifting not many girls participate. After this, I want every girl to take weightlifting as a sport. In further tournaments, I want there should be maximum participation from the girls. I feel now more girls will take up the sport of weightlifting,” she added.

The ace weightlifter urged everyone to motive their daughters to take up sports as a career.

“Girls have the power to achieve anything, I urge everyone to motivate their daughters to take up a sport (any sport),” she said.