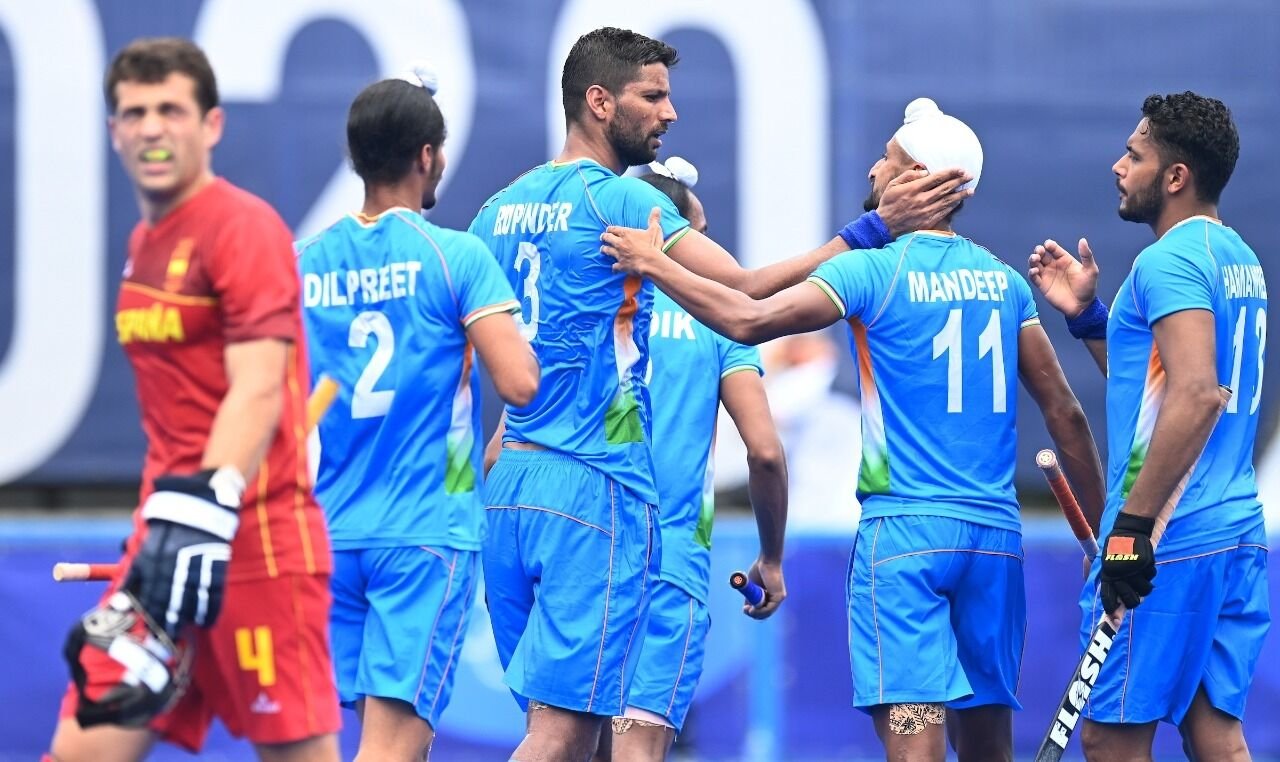 India outplayed Spain 3-0 in men’s hockey at the Olympics. (photo via IANS)

TOKYO – An inspired team change by coach Graham Reid and some solid work by the defenders helped India redeem themselves from a 1-7 thrashing at the hands of world No. 1 Australia to hand Spain a convincing 3-0 defeat in a Group A match July 27 that put their Tokyo Olympic Games men’s hockey tournament campaign back on track.

It was a test of character for the Indian team after the disastrous outing against the Kookaburras – they not only had to win their match against Spain but also show the world that they had the ability to come back and fight for the spot in the quarterfinal. They also had to improve their goal difference, which was down to -5.

And coach Reid too responded by bringing in the more experienced Simranjeet Singh into the 16-member team sheet in place of Gurjant Singh.

The Indians managed to do both – win the match and improve their goal difference by keeping a clean sheet (Goal difference -2 now) as Simranjeet Singh repaid the confidence shown in him by scoring the first goal in the 14th minute, while veteran drag-flicker Rupinderpal Singh scored a brace (15th, 51st minutes) – the first off a penalty stroke awarded to India when his drag flick off India’s third penalty corner slammed into the body of the Spanish defender on the goal-line.

The Indians defended well in the second and third quarter as Spain went in search of a goal and did not allow the Europeans to capitalize on the many chances they created.

It was not a perfect display by the Indians as they failed to maintain the tempo in the second quarter, soon after taking a 2-0 lead by scoring within 90 seconds in the final minutes of the first quarter. They allowed Spain a lot of space to launch attacks. Spain played very aggressively during this period but could not score a goal.

Coach Reid was satisfied with the performance of his wards, though he was not happy with the number of penalty corners that India conceded to Spain.

“Better result today, but a lot of things to work on from an improvement perspective. The fact that we gave too many corners, that’s always a concern when that happens,” he was quoted as saying by the Hockey India in a release. India conceded seven penalty corners.

“But the team did really well in terms of defending the PC. The first quarter was played very well, we could move the ball really well and it was exactly what we planned to do. I think 2-0 is the worse score in hockey because after that we were relaxed and we struggled a bit in the second and third quarter to get back in the game. We managed to do that in the fourth quarter and tried to play simple hockey and that’s what we ended up doing,” Reid said.

Indeed, the Indians trailed Spain on all statistical parameters except the all-important one – goals scored, and in the end that’s what mattered.

India started the game aggressively and it was Simranjeet Singh who got the first look at the goal for them in the eight-minute but missed. Spain went on the attack for the next few minutes and four good chances, including penalty corners but the Indian defense, which looked so porous against Australia on Sunday, stood solid like a wall and saved all the attempts.

Simranjeet goal came against the run of play when Amit Rohidas sent a long ball into the shooting circle from the sidelines on the right flank. Simranjeet, who was lurking nearby, deflected the shot into the net to make it 1-0 for India.

It was 2-0 in favor of India within a few seconds as India earned a series of penalty corners and off the third, they were awarded a penalty stroke as Rupinderpal’s drag-flick went straight into the body of the Spanish defender on the line.

Leading 2-0, the Indians were expected to continue with the momentum and score more goals. However, they went off the boil on restart in the second quarter and allowed Spain a lot of possession.

Spain earned three penalty corners in this period and attempted a few bold attacks but they could not capitalize on any of them. The trend continued in the third quarter as India goalkeeper PR Sreejesh effected a couple of good saves, while the defense was well-shielded by the midfield.

Spain was also reduced to 10 men during this period as their skipper Andres Miguel de Delas was shown a yellow card for having more than 11 players on the field. However, the Indians failed to capitalize on this advantage.

The fourth quarter was more evenly contested and it was in this quarter that Rupinderpal found the back of the net again – converting India’s fourth penalty corner with a superb drag flick.