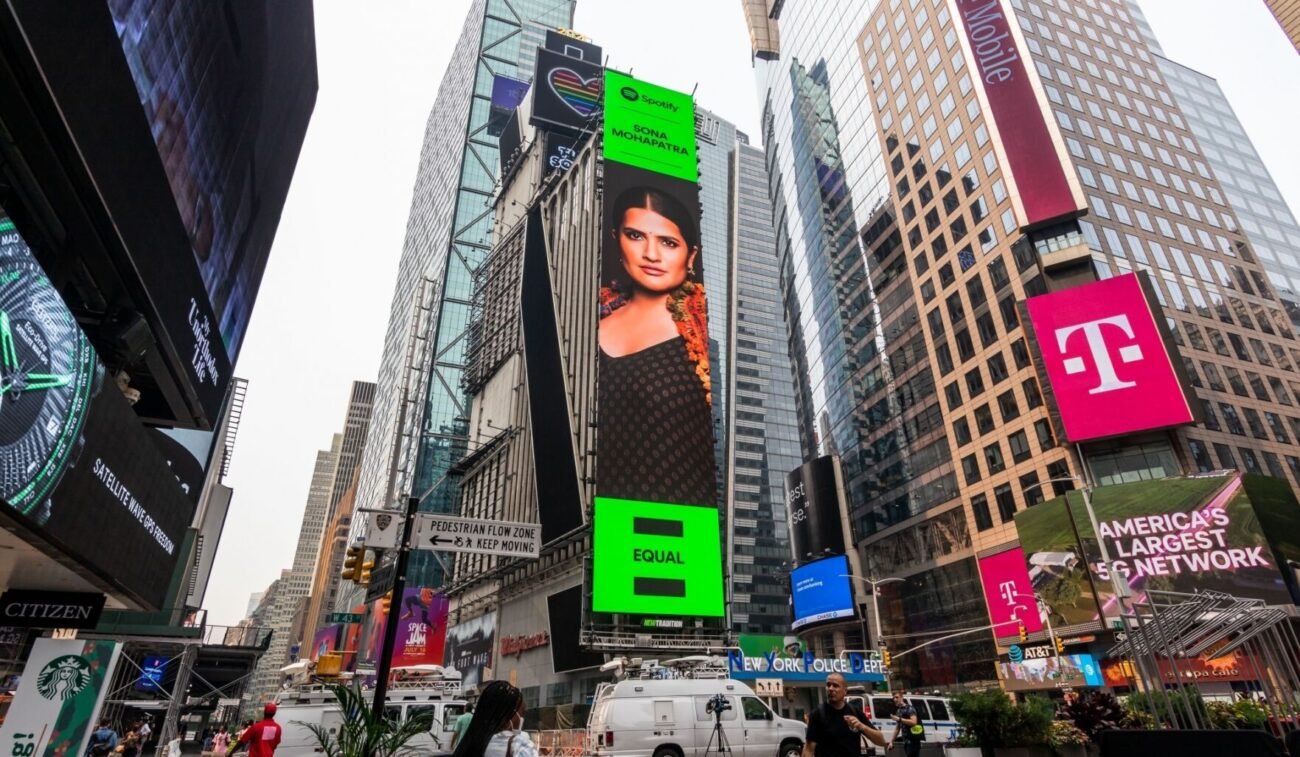 Artist and producer Sona Mohapatra made her debut appearance on the iconic Times Square billboard in New York July 26.

She is one of the first independent musicians to be given this place as a pop-culture milestone.

Mohapatra said: “To be woken up in the middle of the night to see photographs of my face on a billboard covering a skyscraper in one of my favorite cities New York was a surreal feeling. To be one of the first independent musicians to be given this place is a pop culture milestone because it paves the way for artistic expression of various hues and colors free from cookie-cutter formulas in musical mainstream success.”

She appeared on Times Square billboard as part of the Spotify ‘EQUAL’ global campaign leading the Indian leg. Her single track “Aise Na They” is being featured on the ‘EQUAL’ playlist for the entire month.

The soundtrack for “Aise Na They” has been composed by Ram Sampath with lyrics by Amitabh Bhattacharya and distributed by Paris-based music distribution and marketing service Believe. The song’s narrative revolves around a relationship that has lost its fizz, but a sense of optimism is infused in the track through the lovely sound of the hills with pop rock blended with ethereal flutes and tingling mandolins.

Mohapatra said: “I have been consistently releasing original music for many years, have fought many battles for IP & residuals for artists and it has been exhilarating, exhausting too but now, with my indie label Omgrown Music partnering with a global name like Believe, I truly feel optimistic about the future of the music scene in India and more so for other independent voices like mine.”

She added: “To celebrate this achievement, I am dropping a single ‘Ek Din – Manhattan Memories’, a heartbreak love song which would be a perfect companion for a long highway drive or a dance party.”

Talking about the emergence of independent music in the pandemic, she said: “We are slowly coming out of a very tough time together as a society but this phase in India has been the very best for independent music releases without the big banyan tree of Bollywood taking away all the media and audience attention with its big promotional budgets.”

Mohapatra added: “This billboard is a validation of that constant hustle of never giving up on the power of music and self-belief. My allies have stood by me through thick and thin and I am grateful for their belief.”

For the global campaign, the musician has been joined alongside other female global artists such as Meryl (France), Bowklylion (Thailand), Nadin Amizah (Indonesia) and Anikv (Russia).

Launched globally earlier this year to celebrate female talent across the world, the campaign aims to put the spotlight on women in music across the world. The initiative features specially curated playlists across 50 countries.

Vivek Raina, managing director of Believe India, said: “This is a great initiative by Spotify and we are proud to collaborate with Sona Mohapatra. Her new song is a celebration of love which is soulful, a pop-rock romantic track which will surely enthrall her fans.”